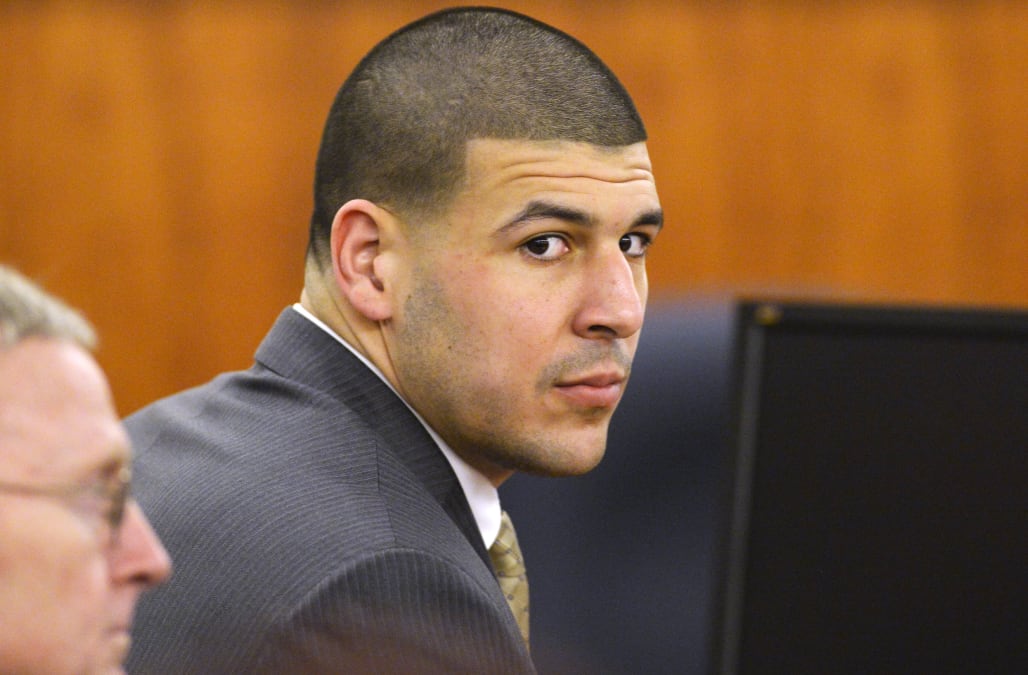 BOSTON (Reuters) - Former New England Patriots football star Aaron Hernandez hanged himself in the jail cell where he was serving a life sentence for murder, just days after being acquitted of a second murder charge, state prison officials said on Wednesday.

Hernandez, 27, was a rising star in the National Football League when he was arrested in June 2013 and accused of murdering an acquaintance near his Massachusetts home. He was convicted of that killing and sentenced to life in prison in 2015, but on Friday he was found not guilty of a 2012 double murder.

Staff at the Souza Baranowski Correctional Center in Shirley, Massachusetts, found Hernandez hanging in his prison cell at 3:05 a.m. EDT (0705 GMT). He was taken to a nearby hospital, where he was pronounced dead an hour later.

Click through for a look back at Aaron Hernandez's NFL career:

"Mr. Hernandez hanged himself utilizing a bed sheet that he attached to his cell window," the state corrections commission said in a statement. "Mr. Hernandez also attempted to block his door from the inside by jamming the door with various items."

A lawyer for Hernandez, a former star tight end with a $41 million contract, did not immediately respond to a request for comment.

More than a year after Hernandez was arrested and charged with murdering Odin Lloyd in an industrial park near his North Attleborough, Massachusetts, home, he was charged with gunning down two Cape Verdean nationals outside a Boston nightclub in 2012.

In his trial for that shooting this year, defense lawyer Jose Baez hammered the credibility of the prosecution's star witness, suggesting that he had killed the men and pinned it on Hernandez in exchange for immunity. Baez is best known for successfully defending Florida mother Casey Anthony in 2011 against charges of murdering her daughter.

Hernandez was cleared of all the charges he faced in the second case but one, a weapons possession count.

After that trial ended, the athlete was expected to appeal his sentence of life in prison without possibility of parole for Lloyd's killing.

RELATED: Mortality rate from suicide by demographic over time in the United States