Trump appears to take child's hat, autograph it, throw it into the crowd 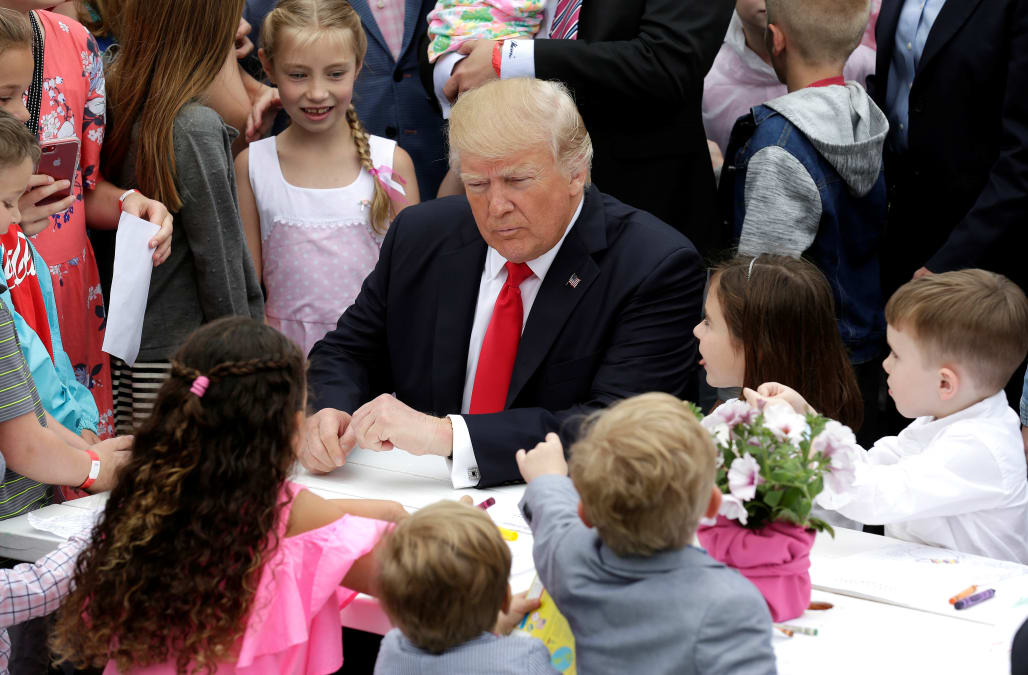 Donald Trump had a bit of an awkward moment at the White House Easter Egg Roll on Sunday.

As the president mingled with the enthusiastic crowd, a child asked him to sign a hat. He complied but then appears to have tossed the hat into the crowd.

A kid asks Trump to sign his hat at the White House Easter Egg Roll. The president signs ... and then tosses the hat into the crowd. pic.twitter.com/7ExdhpO97H

The hat's owner can be heard dramatically yelling "no!" while Trump laughs. A hand reaches out to retrieve the hat just before the president tosses it elsewhere.

Then in the video, a voice saying "thank you" can be heard as Trump accepts another hat to sign. He hands this one back to the owner. After, Trump holds up a pen and says "who's hat?"

Some Twitter users are furious that he would tease a child like that, but others find it harmless and funny.

See how people have responded to the video:

Trump takes child's hat, autographs it, throws it into the crowd
@politico lol ya'll can pretend to be mad about this if ya'll want but this is funny as hell.
@politico A boy grabbed the hat afterwards and ran with it. Later he walked slowly across the White House lawn, twi… https://t.co/151ZzylUGI
@politico Serves the kid right. He got what he deserved.
@politico Looks like he literally forgot it was that kid's hat. Like he's that dumb, that self-absorbed, or that me… https://t.co/X2J4gCCwhD
@politico @docrocktex26 This is why they won't let Trump have a dog.
@politico Appears, in another angle, that he threw it back to the teen who handed it to him. https://t.co/LdEGQR7gvq
@politico This is a man who is not mentally present. Literally can’t remember what he started doing 10 seconds before.
@politico He gets the pen back..
@scott_springer @politico It fits in with the message of turning people against one another. But many adults feel… https://t.co/ixprit2Ilx
@politico I can't even lie. That's funny.
Up Next