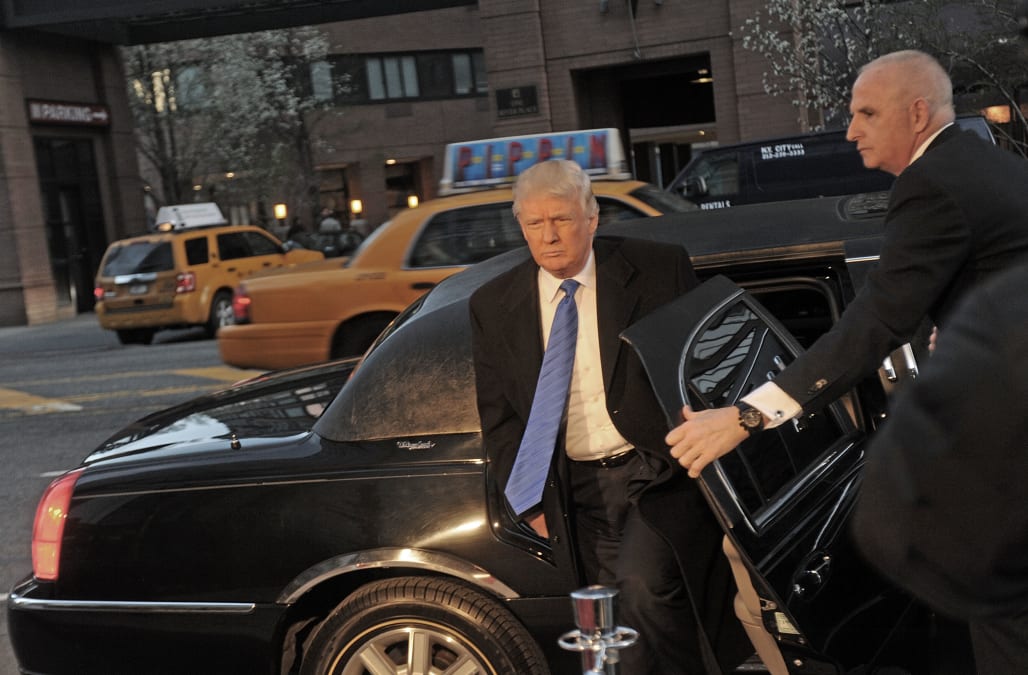 President Trump is reportedly insisting on riding in Queen Elizabeth II's royal carriage during his official trip to the U.K. later this year.

The Times of London reports that "The White House has made clear it regards the carriage procession down the Mall as an essential element of the itinerary for the visit currently planned for the second week of October, according to officials."

While it is customary for visiting heads of state to have a formal procession from the Horse Guards Parade area to Buckingham Palace, not all have traveled in a carriage which is considered to be a less secure option, according to the Huffington Post.

For instance, in 2011, former President Obama arrived at the Palace in a highly fortified vehicle.

The best photos of the British Royal Family

When Prince George met President Obama, in his bathrobe, no less.

Prince William holding Duchess Kate's hand as they leave the St. Andrews Anniversary Dinner in New York City while she was pregnant with Charlotte.

Prince Harry shares a joke with British competitors at the velodrome during the 2014 Invictus Games.

Prince William gives Prince George a kiss on the head while on tour in Australia.

Prince William shares a joke with his grandfather the Duke of Edinburgh during an offical visit to RAF Valley in 2011.

The Duchess of Cambridge reacts (hilariously) as young Dayna Miller shows her a doll made to look like the Duchess.

Prince William explains the planes and helicopters to his very wind-blown son during a visit to the Royal International Air Tattoo.

This adorably candid moment between William and Kate at the London 2012 Olympic Games.

Prince William stretching before the Audi Polo Challenge because ... lol.

Two year old Frederik Azzopardi cries as he refuses to give Queen Elizabeth ll a posy of flowers during The Queen's and visit to University College in 1999.

The Duchess of Cambridge rolls her eyes after someone at an event in NYC tells her to "keep wrapping!" when she pauses to speak with volunteers.

Prince Harry pretends to be a secret service agent (or James Bond?) as Kate cracks up at the 2014 Trooping the Colour ceremony.

The many faces of Prince George during his 2014 royal tour of Australia and New Zealand.

And the many faces of Kate during the London 2012 Olympics.

President Reagan laughs following a joke by the straight-faced Queen Elizabeth II, who commented on the lousy California weather she has experienced since her arrival to the States.

When Kate and William realized they were up on the Jumbotron at Barclays Center in NYC.

Dikembe Mutombo telling Kate and Wills this is the BEST POPCORN EVER. And The royals can't *wait* to try it.

All of the adorable emotions from the most recent balcony appearance.

Prince Harry makes a funny face at Ascot Racecourse in 2011.

When William and Kate met Beyonce and Jay-Z.

When the Duke of Cambridge adorably offered his wife a flower at the Taronga Zoo in Sydney.

Prince Harry sticks out his tongue as he jokes with a child during a visit to the Lesotho Child Counselling Unit in 2008.

And two years ago, China's leader Xi Jinping elected to be taken in a closed carriage for security purposes while Mexico's President Enrique Peña Nieto, in a separate visit, did ride in the Queen's golden carriage.

Protecting Trump during his London visit is a key concern for authorities, with one source telling The Times, "If [Trump] is in a golden coach being dragged up the Mall by a couple of horses, the risk factor is dramatically increased."

Adding to the risk is the expectation that a large crowd will be present to protest Trump's visit.

People reports a White House spokesperson has since denied the Times' report, calling it "completely false." The person added, "We have not even begun working on details for this trip."

See more on the royal family:

Stylish in the Sun

Stylish in the Sun

More from AOL.com:
Actress Busy Phillips claims she thought she was going to be killed in a weekend Uber trip from hell
15 weird and wonderful jobs you can get working for the royal family
13 fascinating facts you didn't know about the royal family