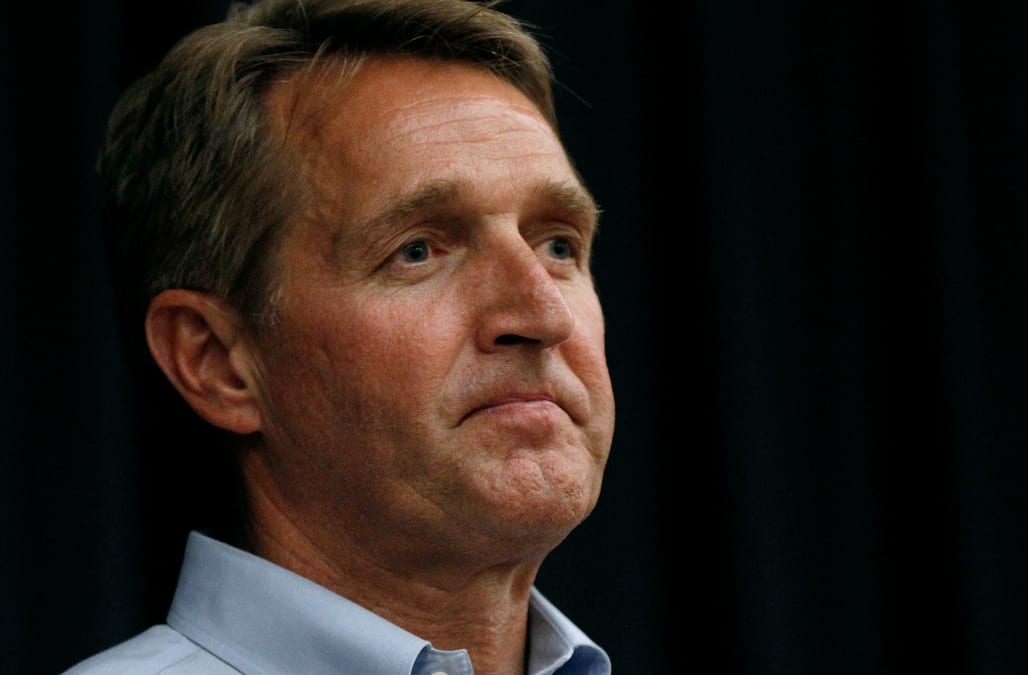 Members of Congress are home for two weeks for the Passover and Easter holidays.

But instead of a leisurely spring break, they're getting an earful from angry constituents, who are pummeling them with questions at town halls about everything from President Donald Trump's tax returns to the Republican health care plan.

Here's a list of the things constituents confronted their representatives about at town halls during the first week of congressional recess:

Health care was what drove the majority of the Tea Party rage at town halls back in 2009. And health care is what's driving the rage at town halls in 2017. Voters of all stripes are furious at Republicans, both for trying to repeal the Affordable Care Act, and for the plan they unsuccessfully attempted to replace it with.

Rep. Mike Coffman (R-Colo.) got an earful from a Republican constituent who was aghast that Coffman would support the American Health Care Act, the House GOP health care plan that crashed and burned late last month.

"I'm sorry to say I was shocked when you declared your intention to vote for the American Health Care Act," Steven Haas, who identified himself as a registered Republican, told Coffman at a town hall Wednesday night. "That is not the way we do things here in Colorado."

Sen. Jeff Flake (R-Ariz.) was also shouted down over the issue, with constituents chanting "health care for all" at him as they pressed him to back a single-payer system.

"I will continue to support, as much as I can, our free-market system of health care," Flake told the crowd, who booed his response, according to the Arizona Republic.

"Senator, my question is: when are you going to choose your country over your party?" pic.twitter.com/xGHsPAwF8j

Constituents at his town hall, however, were not buying Flake's complaints, booing his comments and raising the issue of Merrick Garland, Barack Obama's SCOTUS nominee whom Republicans refused to give a hearing, let alone a vote.

Supreme Court nominee Neil Gorsuch looks on as Senate Judiciary Committee. President Donald Trump has nominated Judge Gorsuch to the Supreme Court to fill the seat that had left vacant with the death of Associate Justice Antonin Scalia in February 2016.

Gorsuch has never directly ruled on Roe v. Wade, the 1973 ruling that legalized abortion in the U.S., but he was pressed on the landmark ruling during his Senate confirmation hearing.

When Sen. Lindsey Graham (R-S.C.) asked Gorsuch what he would have done if President Trump asked him to overturn Roe v. Wade, the judge responded, "I would have walked out the door. It's not what judges do. I don't do it at that end of Pennsylvania Avenue and they shouldn't do it at this end either, respectfully."

Some refer to passages from a book Gorsuch wrote on assisted suicide. In the book, The Future of Assisted Suicide and Euthanasia, Gorsuch wrote, "The idea that all human beings are intrinsically valuable and the intentional taking of human life by private persons is always wrong."

Gorsuch has never directly ruled on the Second Amendment. However, during his confirmation hearing, Sen. Dianne Feinstein (Calif.) questioned Gorsuch on District of Columbia v. Heller -- a landmark ruling that overturned a ban on handguns and certain requirements when storing guns in Washington D.C.

Gorsuch offered limited responses to Feinstein's questioning, but did conclude that Heller was the "law of the land."

Gorsuch is widely regarded as a strong proponent of religious liberty.

In a landmark ruling, Gorsuch sided with an employer in the Burwell v. Hobby Lobby Stores, Inc. case in 2013, making it legal for a non-profit organization to deny employees access to contraceptives if it goes against their religious beliefs. The case ultimately reached the Supreme Court, where it was also ruled in the favor of Hobby Lobby.

In another case, Gorsuch ruled in favor of a Wyoming inmate. The ruling allowed the inmate to use a prison yard sweat lodge, that he had previously been denied access to, for Native American religious worship.

Gorsuch has not hinted to how he feels about President Trump's proposed travel ban, and many experts are split on how the SCOTUS nominee would vote on the executive order that bans immigrants from six majority-Muslim countries. The ban is currently suspended following rulings by federal judges in Hawaii and Maryland.

Gorsuch has sided with immigrants in past cases, and as Cornell University constitutional law professor Michael Dorf noted to the Denver Post -- "Gorsuch’s sympathy for people in religious cases, a general skepticism of executive power and a history of ruling for immigrants give some reason to think he could be sympathetic to plaintiffs challenging a ban on people from certain countries."

In the 2015 case Energy and Environment Legal Institute vs. Epel, Gorsuch sided with a Colorado law that requires 20 percentage of electricity sold in the state to be from renewable sources. The case was filed by an out-of-state coal company, claiming the law was a threat to interstate commerce.

When pressed about gay rights and strict interpretations of the law by Sen. Dianne Feinstein, (D-Calif.) during his confirmation hearing, Gorsuch responded that "no one is looking to return us to horse and buggy days."

"We’re trying to interpret the law faithfully, taking principles that are enduring and a Constitution that was meant to last ages and apply it and interpret it to today’s problems."

Gorsuch also told the Senate Judiciary Committee, "A good judge starts with precedent and doesn’t reinvent the wheel. So to the extent, there are decisions on these topics — and there are — a good judge respects precedent."

While Gorsuch does hail from Colorado, the first state to legalize marijuana for recreational use, it is still unclear where he stands on the issue.

In 2015, Gorsuch ruled against a dispensary, forcing the company to pay taxes on items they wrote off as business expenses in an effort to avoid incriminating themselves due to a federal law banning marijuana.

"If Neil Gorsuch was the first Supreme Court justice ever to be filibustered, what happened to Merrick Garland's vote?" one constituent asked.

"I think Merrick Garland was a great man and a good judge, but what happened in the Senate last year, you may not have liked it, but it was not without precedent," Flake responded, eliciting boos from the audience.

"What happened to Merrick Garland's vote?!"

"He needs to go," Coffman said.

When Rep. Greg Walden (R-Ore.) said Trump has the right to keep his tax returns private, the room at his Thursday night town hall erupted.

"Every one of us has a protection of our tax returns," Walden said, leading to chants of "Shame! Shame!" according to a local television station.

On Thursday, Trump signed a bill that allows states to defund health care clinics that provide abortion services, such as Planned Parenthood. And Republican members of congress who voted in favor of the law got hammered by angry town hall attendees over that vote.

"No matter how you feel about the abortion issue, taxpayer funding shouldn't be used to provide abortion services," Flake added, to loud boos and chants that at times drowned out his response.

Rep. Markwayne Mullin (R-Okla.) incorrectly explained to a voter that the idea of taxpayers footing the bill for his $174,000 congressional salary is "bull crap."

WATCH: GOP Congressman @RepMullin to constituents at a town hall: 'bullcrap' to say that taxpayers pay my salary. pic.twitter.com/29UewiMufS

"I pay for myself," Mullin said. "I paid enough taxes before I ever got there and continue to through my company to pay my own salary. This is a service no one here pays me to do. I do it as an honor and a service."

More from Mic.com:
These members of Congress demanded Obama get approval for a Syrian strike — but not Trump
A GOP representative said Sean Spicer "needs to go" at a testy town hall
The resistance might get its first electoral win since Trump — without Democratic money