Tensions mount as Tillerson meets with Putin in Moscow 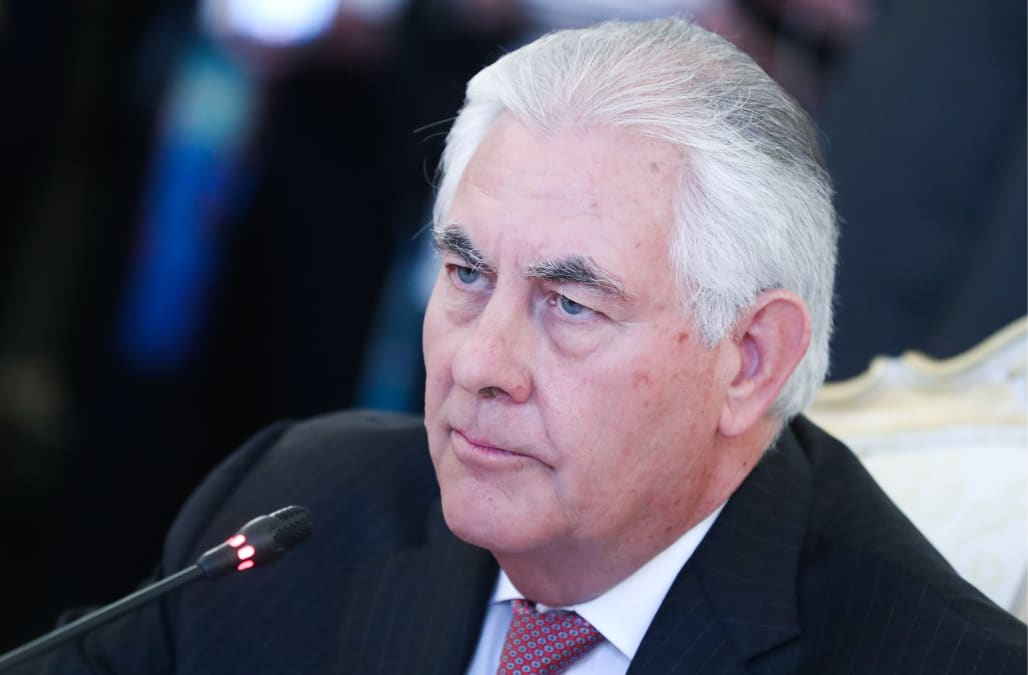 Russian President Vladimir Putin held a meeting in the Kremlin with U.S. Secretary of State Rex Tillerson, a spokeswoman for the U.S. embassy in Moscow said on Wednesday, citing Kremlin officials.

The Kremlin had previously declined to confirm that such a meeting would take place during Tillerson's visit, reflecting tensions over a U.S. missile strike on Syria, a staunch Russian ally, last week.

Putin said on Wednesday trust had eroded between the United States and Russia under President Donald Trump, as Moscow delivered an unusually hostile reception to Secretary of State Rex Tillerson in a face-off over Syria.

Any hope in Russia that the Trump administration would herald less confrontational relations has been dashed in the past week after the new U.S. leader fired missiles at Syria to punish Moscow's ally for its suspected use of poison gas.

Tillerson started a meeting with Putin in the Kremlin after talking to his Russian opposite number Sergei Lavrov for around three hours. The Kremlin had previously declined to confirm Putin would meet Tillerson, reflecting tensions over the U.S. strike on Syria.

Just as Tillerson sat down for talks with Lavrov earlier on Wednesday, a senior Russian official assailed the "primitiveness and loutishness" of U.S. rhetoric, part of a volley of statements that appeared timed to maximize the awkwardness during the first visit by a member of Trump's cabinet.

"One could say that the level of trust on a working level, especially on the military level, has not improved but has rather deteriorated," Putin said in an interview broadcast on Russian television.

In his interview, Putin doubled down on Russia's support for Syrian President Bashar al-Assad, repeating denials that Assad's government was to blame for the gas attack last week and adding a new theory that the attack may have been faked by Assad's enemies.

Tillerson's official itinerary in Moscow started with the meeting with Lavrov, in an ornate hall in a foreign ministry-owned residence. In opening remarks in front of reporters, Lavrov greeted Tillerson with unusually icy remarks, denouncing the missile strike on Syria as illegal and accusing Washington of behaving unpredictably.

"I won't hide the fact that we have a lot of questions, taking into account the extremely ambiguous and sometimes contradictory ideas which have been expressed in Washington across the whole spectrum of bilateral and multilateral affairs," Lavrov said.

"And of course, that's not to mention that apart from the statements, we observed very recently the extremely worrying actions, when an illegal attack against Syria was undertaken."

Lavrov also noted that many key State Department posts remain vacant since the new administration took office -- a point of sensitivity in Washington.

"As a whole, the administration's stance with regards to Syria remains a mystery. Inconsistency is what comes to mind first of all."

Tillerson kept to more calibrated remarks, saying his aim was "to further clarify areas of sharp difference so that we can better understand why these differences exist and what the prospects for narrowing those differences may be."

"I look forward to a very open, candid, frank exchange so that we can better define the U.S.-Russian relationship from this point forward," he told Lavrov.

After journalists were ushered out of the room, Lavrov's spokeswoman, Maria Zakharova, wrote on her Facebook page that U.S. journalists traveling with Tillerson had behaved as if they were in a "bazaar" by shouting questions to Lavrov.

Moscow's hostility to Trump administration figures is a sharp change from last year, when Putin hailed Trump as a strong figure and Russian state television was consistently full of effusive praise for him.

The White House has accused Moscow of trying to cover up Assad's use of chemical weapons after the attack on a town killed 87 people last week.

Trump responded to the gas attack by firing 59 cruise missiles at a Syrian air base on Friday. Washington warned Moscow, and Russian troops at the base were not hit.

Moscow has stood by Assad, saying the poison gas belonged to rebels, an explanation Washington dismisses as beyond credible. Putin said that either gas belonging to the rebels was released when it was hit by a Syrian strike on a rebel arms dump, or the rebels faked the incident to discredit Assad.

Trump came to the presidency promising to seek closer ties with Russia and greater cooperation fighting against their common enemy in Syria, Islamic State. Tillerson is a former oil executive who was awarded Russia's Order of Friendship by Putin.

One of Lavrov's deputies was even more undiplomatic.

Last week's poison gas attack and the U.S. retaliation upended what many in Moscow hoped would be a transformation in relations between the two countries, which reached a post-Cold War low under Trump's predecessor Barack Obama.

The United States and its European allies imposed financial sanctions on Russia in 2014 after Putin seized territory from neighboring Ukraine.

Washington is leading a campaign of air strikes in Syria against Islamic State fighters and has backed rebels fighting against Assad during a six-year civil war, but until last week the United States had avoided directly targeting the Syrian government.

Russia, meanwhile, intervened in the civil war on Assad's side in 2015 and has troops on the ground, which it says are advising government forces. Both Washington and Moscow say their main enemy is Islamic State, although they back opposing sides in the wider civil war which has killed more than 400,000 people and spawned the world's worst refugee crisis.

In an interview with the Fox Business Network, Trump said he was not planning to order U.S. forces into Syria, but that he had to respond to the images of dead children poisoned in the gas attack.

"We're not going into Syria," he said in excerpts of the interview on the station's website. "But when I see people using horrible, horrible chemical weapons ... and see these beautiful kids that are dead in their father's arms, or you see kids gasping for life ... when you see that, I immediately called (Defense Secretary) General Mattis."

Tillerson traveled to Moscow with a joint message from Western powers that Russia should withdraw its support for Assad after a meeting of the Group of Seven industrialized economies also attended by Middle East allies.

Some of Washington's allies had been wary of Trump, who spoke during his election campaign of seeking closer ties with Moscow and questioned the value of U.S. support for its traditional friends. Tillerson's mission sees the Trump administration taking on the traditional U.S. role as spokesman for a unified Western position.

Trump's relations with Russia are also a domestic issue, as U.S. intelligence agencies have accused Moscow of using computer hacking to intervene in the election to help Trump win. The FBI is investigating whether any Trump campaign figures colluded with Moscow, which the White House denies.

More from AOL.com:
Putin: Trust between US, Russia has 'deteriorated' under President Trump
US hopes Russia will abandon Syria regime support, says Assad reign 'coming to an end'
Amb. Nikki Haley: We don't see peace in Syria with Assad