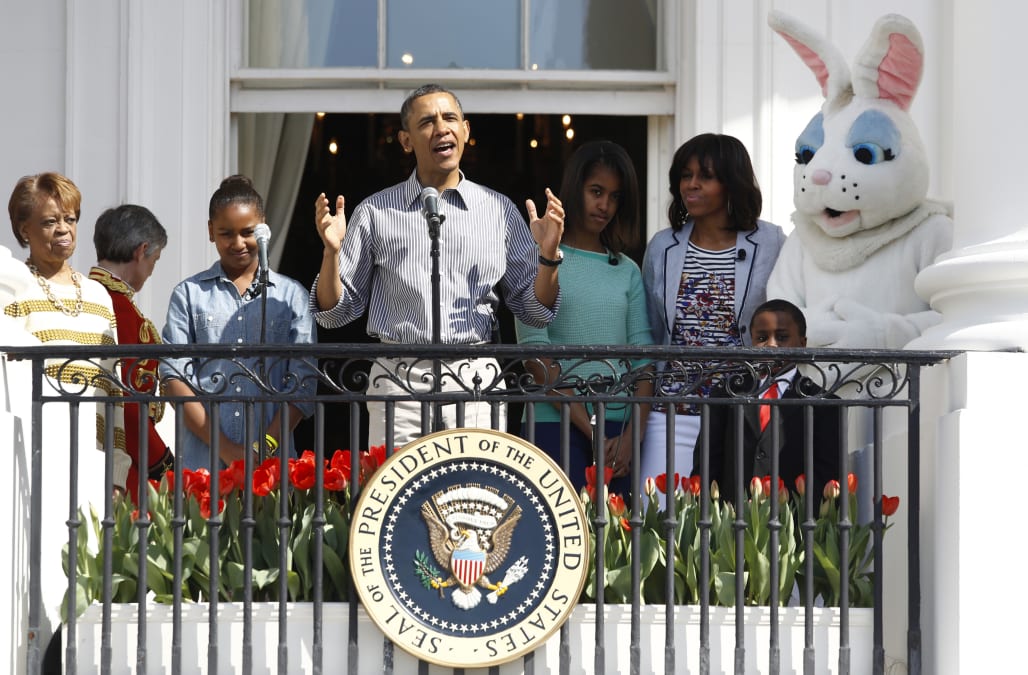 The 138-year-old celebration has drawn 35,000 people to the South Lawn in recent years.

The first warning sign of egg-based strife came from a tweet. Wells Wood Turning, the company that traditionally supplies commemorative wooden eggs for the event, sent an urgent message to the president, Melania Trump and Ivanka Trump.

According to The New York Times, the staff was wondering if the Trumps planned to continue the tradition of distributing the eggs, or forego the celebration all together.

@FLOTUS@realDonaldTrump@POTUS@MELANIATRUMP@IvankaTrump FYI manufacturing deadlines for the Easter eggs are near. Please reach out! pic.twitter.com/D78YqWVPBi

In March, the White House announced that there would indeed still be an Easter Egg Roll, and they put in a rush order for wooden eggs.

The egg scramble had people wondering -- would the many goings on of Trump's presidency -- The New York Times cites the Russian investigation, travel ban, off-site first lady and health care bill, for instance -- distract from this massive, elaborate public event?

"It's the single most high-profile event that takes place at the White House each year, and the White House and the first lady are judged on how well they put it on," Melinda Bates, who organized eight years of Easter Egg Rolls as director of the White House Visitors Office under President Bill Clinton, told The New York TImes. "I'm really concerned for the Trump people, because they have failed to fill some really vital posts, and this thing is all hands on deck."

President Barack Obama faced criticism himself for a White House party catastrophe. In 2009, a pair of aspiring celebrities crashed a state dinner, and it subsequently went viral.

The New York Times repeatedly requested information about the Easter Egg Roll, which is usually heavily promoted, but received no new details.

"Plans for the Easter Egg Roll are well underway, and the White House looks forward to hosting it," said Stephanie Grisham, Melania Trump's communications director. She said it is not accurate to assume that the event will be scaled back from pervious years, but did not give any specific information about the program.

According to The New York Times, it seems that the event will draw about 20,000 people -- nearly half as much as last year -- and be staffed by 200 volunteers, which is one-fifth of the normal number. The people who spoke to The Times did so anonymously, since they were not authorized to do so -- even a week before the event.

"Plans for the Easter Egg Roll are well underway, and the White House looks forward to hosting it," said Stephanie Grisham, Mrs. Trump's communications director, installed only a few weeks ago.

Costumed characters didn't know for sure that the event was happening until they were contacted late last month.

"We just got word about this year's Egg Roll and are working on planning," Jennifer Rankin Byrne, the senior director of media relations for PBS, said on March 20.

Members of Congress have reportedly not heard from the White House about whether they will be given tickets to distribute to their constituents.

The confusion regarding the events is likely linked to the fact that the East Wing staff is in charge of the Easter Egg Roll.

That responsibility would fall upon Melania Trump, but she lives in New York and has had a limited presence in the White House since President Trump was sworn in.

She has not yet named a director for the Visitors Office, who is usually a "central player" in the event, according to The New York Times.

"You don't understand what a beast this thing is to plan until you go and plan your first one," Ellie Schafer, who organized Easter Egg Rolls for the Obamas as the director of the White House Visitors Office from 2009 to 2016, told The New York Times. "Every administration tries to put its own stamp on it, but the stakes are high because it's such a Washington tradition, and people just love it and have very strong feelings about it."

She said that if you can organize a White House Easter Egg Roll, you can do anything.