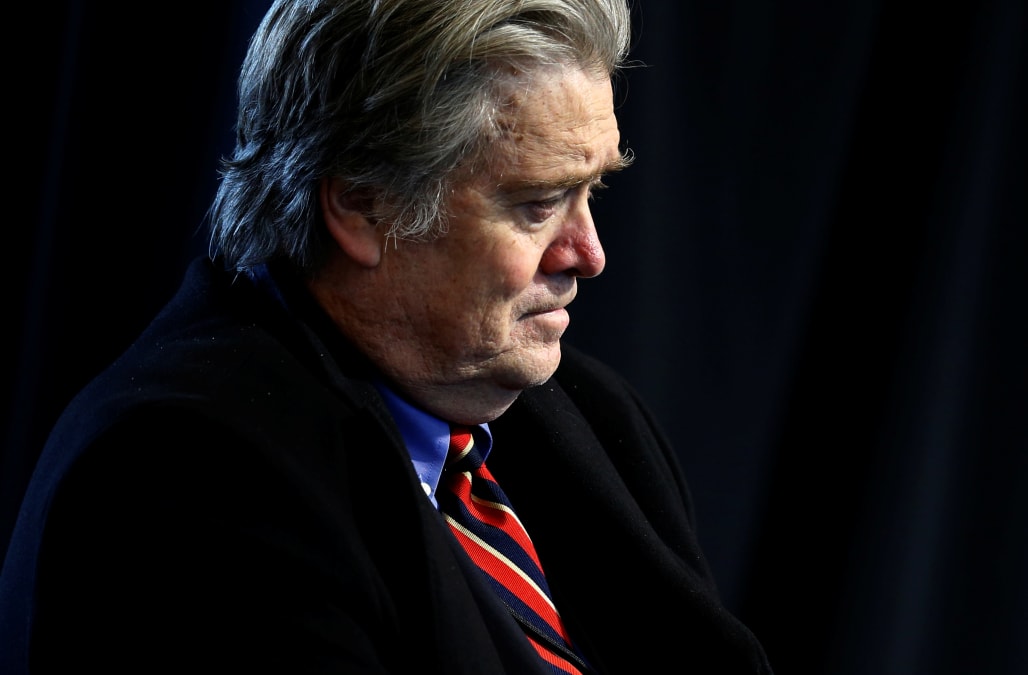 With President Trump removing Steve Bannon from the National Security Council, a new report suggests the move may stem in part from the president's irritation over the level of credit Bannon gets in regard to the Trump administration's decisions.

Sources told the New York Times that Trump was "not pleased" that people were referring to the strategist as "President Bannon."

Reactions to Bannon's removal from National Security Council
Bannon should never have been on the National Security Council, he should be removed from the White House next. https://t.co/utZJXD9Wz4
White nationalists don’t belong on the National Security Council. They also don’t belong in the White House.… https://t.co/IacBhGYvCp
BREAKING NEWS! After swell of support for my bill to kick Steve Bannon off the NSC, he has been removed from NSC! #DepoliticizeTheNSC #FL07
Positive sign in terms of NSC process to extent it's relevant. One might note Kushner is not on NSC, yet appears to… https://t.co/rmpv5Zl1iM
I'm no management expert, but WH putting Bannon on NSC solely out of fear WH's chosen NSA might do something crazy seems an odd explanation
WOW! Steve Bannon tossed from National Security Council! After watching yesterday's new ads, Trump is replacing him with a can of Pepsi.
In war for WH, GOP, Pence & Priebus were always going to win - it was just a matter of when, not if. Bannon move proof.
Sen Cardin on Bannon being off the NSC: "If that is true..I'd be very pleased...my hope is that he has no role in government at all."
BREAKING: Steve Bannon is off the NSC! If I'm a betting woman, w the world in chaos, I'd bet McMaster finally told Trump my way or I'm gone!
BREAKING: Steve Bannon off the National Security Council. Good move. He should never have been on it. 👍
Good news that white nationalist Steve Bannon is off NSC Principals Committee. Would be even better news if here were out of WH altogether.
guess you could say they’ll be bannon him from future meetings, yes, this is a cry for help https://t.co/z6D1xjjSGv
Senior WH official says Bannon's mission on the NSC was to keep an eye on Flynn as he "de-operationalized" the NSC from Rice. "Mission Done"
We haven't heard much at all about H. R. McMaster recently, but he has respect across the board, and this is likely his doing. #Bannon
Up Next

"President Bannon" memes popped up on the belief that Trump hates sharing the spotlight. People on social media were quick to draw conclusions once Bannon was removed from his post. There were Tweets like

"Those #PresidentBannon hashtags worked, y'all," "It really shouldn't be that easy to troll the president" and "Wow. If #PresidentBannon can get impeached that quickly, imagine what might happen to Trump."

Of course, other factors were likely at play in Trump's decision. The Times pointed to the failure of the first immigration order, as well as the tension between Bannon and national economics adviser Gary Cohn.