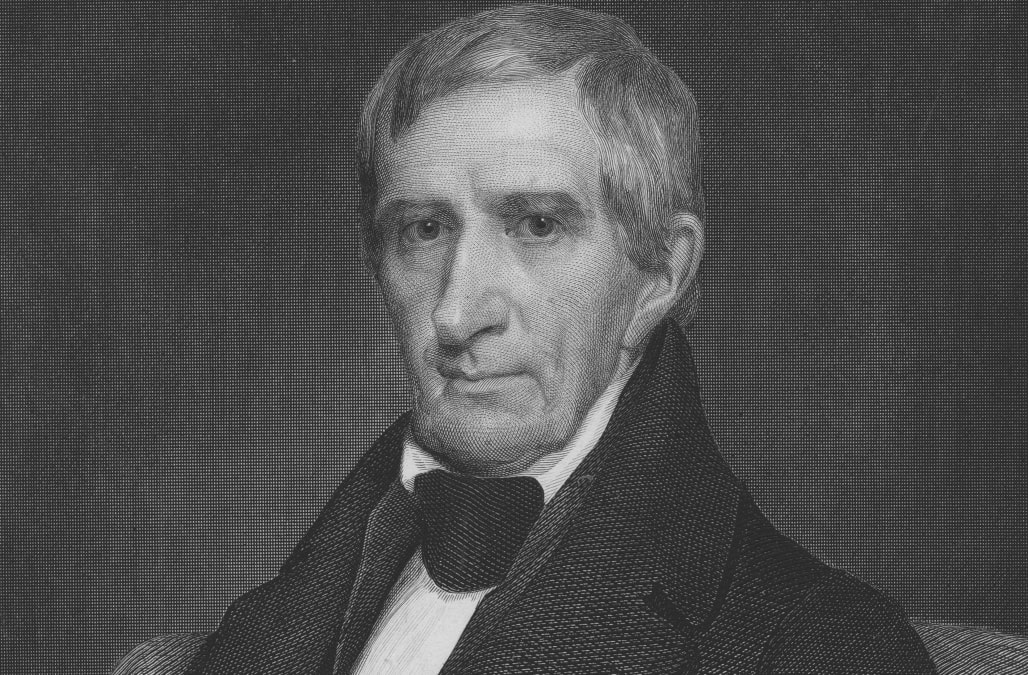 On April 4, 1841, William Henry Harrison became the first US president to die in office.

Harrison's death shocked the nation. He had been inaugurated just 30 days earlier, making him to this day the shortest-serving president in US history.

Harrison is commonly believed to have died of pneumonia caught while giving his famously long Inaugural Address — although that theory is disputed by some modern historians.

It took several days for the news of Harrison's death to spread across the country, as evidenced by newspaper archives available on the Library of Congress' website.

"The painful tidings of a Nation's deplored bereavement have already been borne on the wings of the wind to every portion of the land. WILLIAM HENRY HARRISON IS NO MORE!"

On April 13, Vermont's The Caledonian, reprinting a report from the New York Express, gave a play-by-play of President Harrison's final hours.

"5 o'clock — The President wanders, and is at times quite insensible. All his symptoms are worse. His family are hanging in anxiety over his bedside, his Physicians watching every motion."

"Our palsied pen refuses a response to our feelings, and leaves us mute with the varied and commingled emotions inspired by the intelligence from the National Metropolis. Too pure for earth, a great and good man has been translated to the society of Washington, and Franklin, and the kindred spirits of olden time, — his exemplars while here, and his associates hereafter; forever and ever."

The Madisonian's April 12 obituary included a tribute in the form of a poem by Baltimore poet John Hill Hewitt.

The wail hath gone forth o'er the land of the free,

And the heart of the patriot chills at the cry;

And the name of a hero is breathed with a sigh

For the editors in the tiny town of Holly Springs, Mississippi, Harrison's death came just before press time.

As the report says, the editors of the paper barely had room to squeeze in a blurb about the president's demise before their April 16 issue was published.

"The Journal and other papers received this morning confirm the heart rending intelligence," the report reads. "THE PURE, THE GOOD, THE NOBLE-HEARTED HARRISON IS NO MORE!"

"In announcing this melancholy event, all other reactions are absorbed in the thought of the nothingness of life, the emptiness of earthly grandeur. One brief month has witnessed his ascent to the summit of human ambition — and his passage to the tomb. 'What shadows we are, and what shadows we pursue!'"

Several newspapers, including Raleigh's North-Carolina Standard on April 14, published a note by five of Harrison's six Cabinet members. The note was originally published by Washington's National Intelligencer and distributed around the country.

"The People of the United States, overwhelmed, like ourselves, by an event so unexpected and so melancholy, will derive consolation from knowing that his death was calm and resigned as his life has been patriotic and useful, and that the last utterance of his lips expressed a fervent desire for the perpetuity of the Constitution and the preservation of its true principles. In death as in life, the happiness of his country was uppermost in his thoughts."

On April 17, 1841, Pennsylvania's Sunbury American and Shamokin Journal was one of many papers to publish the address of Vice President John Tyler, who assumed the presidency after Harrison's death.

"For the first time in our history the person elected to the Vice Presidency of the United States, by the happening of a contingency provided for in the constitution, has had devolved upon him the Presidential office," Tyler said.

The unprecedented death of a sitting president caused a brief crisis, as the Constitution did not specify how much power the vice president should get in such a situation. Some believed Tyler should serve merely as "acting President," although Tyler quickly established his right to fully succeed Harrison, setting future precedent that eventually inspired the 25th Amendment.

That didn't stop critics from giving Tyler the unfortunate nickname "His Accidency."