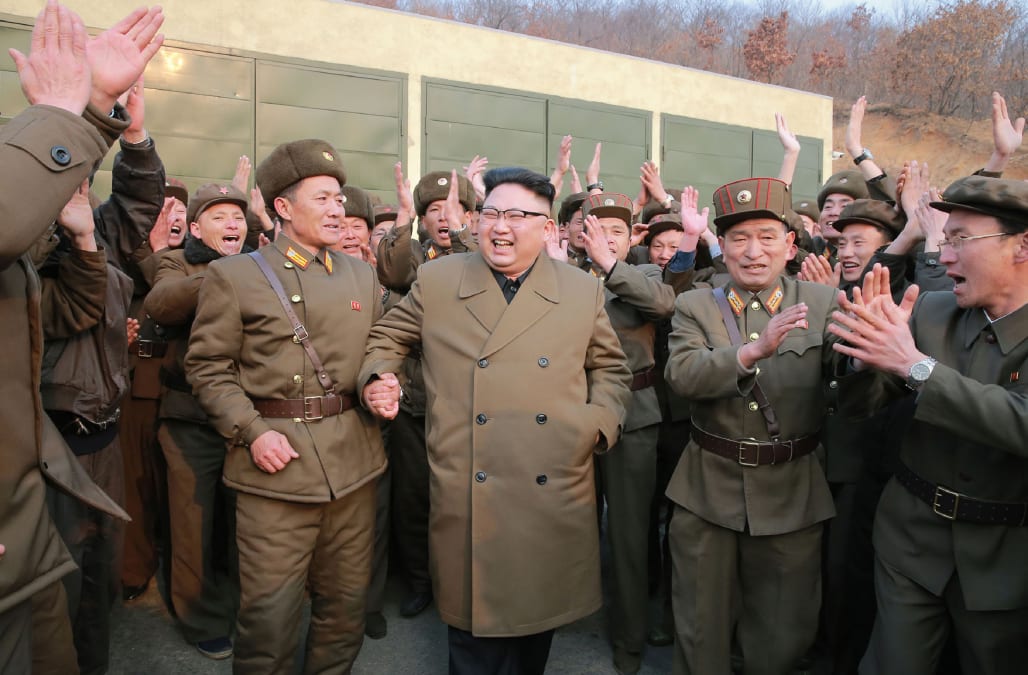 SEOUL, South Korea — A senior North Korean defector has told NBC News that the country's "desperate" dictator is prepared to use nuclear weapons to strike the United States and its allies.

Thae Yong Ho is the most high profile North Korean defector in two decades, meaning he is able to give a rare insight into the secretive, authoritarian regime.

According to Thae, North Korean dictator Kim Jong Un is "desperate in maintaining his rule by relying on his [development of] nuclear weapons and ICBM." He was using an acronym for intercontinental ballistic missiles — a long range rocket that in theory would be capable of hitting the U.S.

"Once he sees that there is any kind of sign of a tank or an imminent threat from America, then he would use his nuclear weapons with ICBM," he added in an exclusive interview on Sunday.

Thae was living in London and serving as North Korea's deputy ambassador to the United Kingdom when he and his family defected to South Korea and were announced the world in August.

He was not directly involved in North Korea's weapons program but believes his country "has reached a very significant level of nuclear development."

North Korea is estimated to have upward of eight nuclear weapons but has not demonstrated the ability to attach them to a long-range rocket, an ICBM, capable of hitting the U.S.

Analysts are unsure exactly how close the regime is to achieving this aim, but a senior official told NBC News in January that his government was ready to test-fire an ICMB "at any time, at any place."

"They have the nuclear capability — they've demonstrated that," he said. "And then, where they're going with the miniaturization of that, whether they can actually weaponize a missile, that's what's driving the current concern."

Thae's interview with NBC News comes against a backdrop of rising tensions surrounding North Korea, which has significantly increased its missile and nuclear tests under Kim's rule.

President Donald Trump told the Financial Times newspaper on Monday that "something had to be done" about North Korea. This came after Defense Secretary James Mattis said the country "has got to be stopped" and Secretary of State Rex Tillerson said military action was "on the table."

"It does feel more dangerous — I'll give you three reasons," according to Adm. James Stavridis, an NBC News analyst and dean of the Fletcher School of Law and Diplomacy at at Tufts University in Massachusetts. "One is [Kim's] own precarious situation in command of the nation. Number two is the instability in South Korea. We've just seen the South Korean president indicted, arrested, and incarcerated."

"And, number three, a new and more aggressive American foreign policy coming from Washington," he added.

Some analysts have warned that military action against the country might be very difficult and even disastrous. An invasion could risk a retaliatory strike against U.S. allies of Japan and South Korea, whose capital, Seoul, is just 50 miles from the border.

Nonetheless, Thae warned America and its allies to be prepared.

"If Kim Jong Un has nuclear weapons and ICBMs, he can do anything," he said. "So, I think the world should be ready to deal with this kind of person."

He added that "Kim Jong Un is a man who can do anything beyond the normal imagination" and that "the final and the real solution to the North Korean nuclear issue is to eliminate Kim Jong Un from the post."

Kim came to power in 2012 and has defined his strongman premiership by the pursuit of a nuclear weapon that can hit the U.S. He has conducted more missile tests than in the rest of the country's history combined, and three of North Korea's five nuclear tests came under his watch.

According to Thae, Kim is obsessed with obtaining nukes because he saw what happened to Iraq's Saddam Hussein and Libya's Moammar Gadhafi, both of whom abandoned their countries' weapons of mass destruction programs and then were overthrown by Western-backed forces.

Many analysts agree that Kim sees a nuclear weapon — and the retaliatory threat it poses — as an insurance policy against a similar strategy being pursued against him.

"That's why Kim Jong Un strongly believes that only a nuclear weapon can guarantee his rule," Thae said.

According to the former diplomat, the world should look to Kim's past actions to see what he is capable of. The young leader has reportedly been responsible for purges and executions of top officials and even members of his own family.

Last month, according to U.S. and South Korean intelligence officials, he masterminded the assassination of his own half-brother, at an airport in Malaysia.

"Kim Jong Un is a person who did not even hesitate to kill his uncle and a few weeks ago, even his half-brother," Thae said. "So, he is a man who can do anything to remove [anyone in] his way."

Since his defection Thae has been making media appearances and giving talks denouncing North Korea's controlling and often brutal society. For this reason he believes he could be the next victim.

"I am already a marked man," he said. "Kim Jong Un wants to eliminate any person or any country which poses a threat to him. And I think I am really a great threat to him."

Thae was the highest-ranking North Korean official to abandon the regime and enter public life in South Korea since the 1997 defection of Hwang Jang Yop, who was responsible for crafting "Juche" — North Korea's state ideology, which blends elements of Marxism with ultra-nationalism.

He made the decision to switch sides, he said, after his two sons began asking questions about why North Korea did not allow the internet, why there was no proper legal system and why officials were executed without trial.

His sons also complained they were being mocked by their British friends.

"All of my family members were a little bit frightened, you know, on that day," he said of the moment he decided to escape. "But I always told them that we have to try to be as peaceful as possible. We should carry the normal faces and normal feelings so that our plan of defection should not be noticed by anyone in the embassy."

This came at a high price, however. He was able to escape with his wife and children — but he fears his brother and sister in North Korea have been punished for his actions.

"Our freedom here is achieved at the cost of the sacrifice of my family members left in North Korea," he said. "When a defection of my level happens, the North Korean regime usually sends the family members of high officials, defectors, to remote areas or labor camps and, to some extent, even to political prison camps as well."

This fate is not unique. More than 100,000 people are believed to have been detained in North Korea's notorious gulags, where they are subjected to forced labor, torture and executions — treatment the United Nations said was "strikingly similar" to the atrocities of Nazi Germany.

Families are taken away by the country's secret police for arbitrary crimes such as "gossiping" about the state.

This is all part of the dictatorship's attempt to restrict information reaching North Korean families from the outside world. Most people cannot use the internet or access foreign media — Kim's attempt to maintain the pretense that his country is prosperous and the Western world is failing.

In all, North Korea "remains one of the most repressive states in the world," according to Human Rights Watch.

But according to Thae, the mask is slipping. More and more, North Koreans are able to watch South Korean films, giving them a true picture of their far more prosperous neighbor.

"I'm absolutely sure that once North Korean people are educated enough, then they may stand up," according to the former ambassador. "North Korean population now knows well that South Korea is democratic, the society and economy here are very well."

This, Thae said, "has already made the North Korean population not believe what the regime has been teaching and has been brainwashing them."

He added: "I think this is really a great change in people's mind, because they do not believe in the government's propaganda system."

In this shift may even lie the seeds of fundamental change in North Korea, according to Thae.

"I think that is very important. And once the people do not believe in what the leadership is saying, then there is a great possibility for possible uprising: what happened in Soviet Union, what happened in communist system in Eastern Europe," he said.

Thae said that he and other defectors can play a crucial part removing Kim.

"Every day I am living in order to accelerate the speed of my return home," he said. "I think defectors like me, we should all unite together to bring down Kim Jong Un's regime."