'F*** you terrorist' spray painted on Iranian refugee's home. Now he plans to leave the US 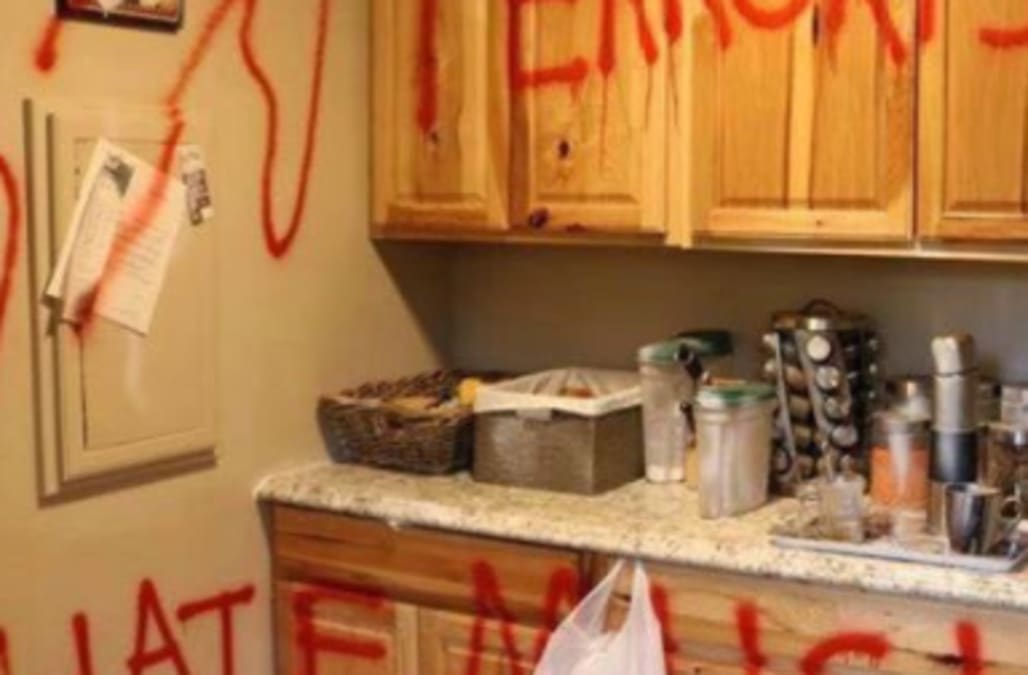 Hasel Afshar, 33, isn't Muslim. He's Baha'i, but that didn't matter to the people that vandalized his home this week.

After taking a three-day vacation, Afshar — an Iranian refugee — returned to his home in Troutdale, Oregon, to find it vandalized with racist epithets and bullets in the shape of a cross. "Terrorist," "Muslim" and "Get out of America" were spray painted in red all over the walls in his home. A threatening letter also accompanied the graffiti.

"If I see you here next month, I will shoot you and burn your house," the note read, according to Outlook, a local newspaper in Oregon.

In 2010, Afshar fled religious persecution in Iran. But after living in the U.S. for about seven years, he's once again enduring religious and racial persecution.

House of Iranian living in Oregon was vandalized by someone who apparently had to spell out their own identity on his walls: "terrorist". pic.twitter.com/np4qMRBDjw

After repairing the damage, Afshar plans to sell his home and leave the U.S. He also said he doesn't care if he loses money on the sale.

"I can sit here and cry and nothing [is] going to be fixed," Afshar told the Outlook. "I have to be strong and just repair my house again."

This isn't the first time Afshar has experienced such violence. Shortly after immigrating to the United States, Afshar said he was punched in the face. He claims that the incident, which took place in California, was racially motivated. According to the Root, Afshar was verbally attacked outside of a convenience store on March 7.

"Get the fuck out of America!," a man in white van shouted. "We don't want you here." Afshar now is wondering if the man followed him home.

This week White Supremacists broke into this Iranian refugee's Oregon home & destroyed it.

Total silence from the administration. pic.twitter.com/meRAnguSaO

The Root reports that the Multnomah County Sheriff's Office is investigating the case as a bias-motivated crime.

"He is of Middle Eastern descent and that's kind of the tie-in here, that's why we're doing it or why we're concerned about it," Gaidos told the Outlook.

The Council of American-Islamic Relations is calling on the FBI to probe the incident as a hate crime.

"The FBI should join in the investigation of this apparent hate crime in order to demonstrate that the rights and safety of American Muslims, and those perceived to be Muslim, will be protected," Ibrahim Hooper, CAIR spokesman, said in a statement.

More from Mic.com:
Is weed legal in Canada? Canada reportedly plans to legalize marijuana in 2018.
Betsy DeVos is making the student debt crisis worse — here's how
Paul Manafort will testify on Russia before House Intelligence Committee