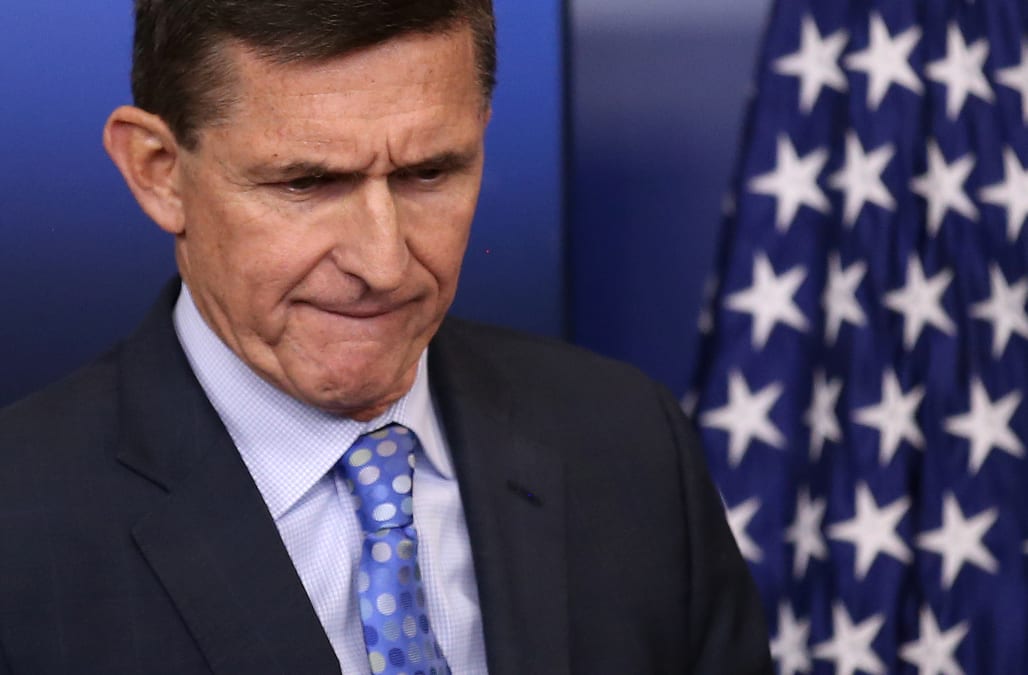 Mike Flynn, who served as the president's national security adviser for three weeks, says he is willing to be interviewed about the Trump campaign's possible ties to Russia in return for immunity from prosecution.

"The image I have in my head of the White House is a runaway train," Jeremy Bash, chief of staff at the CIA and then the Department of Defense under former President Barack Obama, said on MSNBC late Thursday. "The brakes are out ... that is how much trouble we're in."

Bash told The 11th Hour with Brian Williams that authorities would only grant Flynn immunity in exceptional circumstances. The Harvard Law School graduate pointed to the Iran-Contra affair under the administration of President Ronald Reagan in the 1980s as an example of how hard this process can be.

Authorities "would have to want to make a deal" with Flynn, Bash said. "You can only give somebody immunity, full immunity, if it's worth it. They have to believe it's worth it in this case."

He also noted that granting immunity would involve the Justice Department.

"And for the Justice Department to agree to give somebody like him immunity it means they want him to turn and testify against someone higher up in the food chain," Bash said. "Who is higher up in the food chain, higher than the national security adviser? There's really only one person. And so this shows that the jeopardy of criminal liability actually extends all the way to the top."

Flynn, a retired Lt. Gen. who headed the Defense Intelligence Agency before being pushed out by the Obama administration, advised the Trump campaign beginning in 2015.

He served as President Trump's national security advisor for a few weeks before resigning for what the Trump administration said was misleading Vice President Mike Pence about his contacts with Russian Ambassador to the U.S. Sergey Kislyak.

In September, Flynn told Chuck Todd on Meet the Press: "When you are given immunity that means you've probably committed a crime." He was talking about aides to Trump's opponent in the general election, Hillary Clinton.

A Congressional official told NBC News on Thursday that Flynn is willing to be interviewed by the Senate Intelligence Committee about the Trump campaign's possible ties to Russia in return for immunity. In a statement, Flynn's lawyer, Robert Kelner, confirmed that discussions had taken place with the House and Senate Intelligence Committees, and said "General Flynn certainly has a story to tell, and he very much wants to tell it."

A statement by counsel to General Flynn. pic.twitter.com/JQs90OI2OY

Bash, who is a NBC News/MSNBC national security contributor, said there were big questions of the nature of Flynn's request of legal protection. "Immunity from what? What is he in jeopardy of being prosecuted for?" he said.

Bash said in the most serious instance it could involve allegations of "conspiring with a foreign power to provide them national defense or national security information. That's under the Espionage Act, that is a major felony, and that is essentially treason."

Bash said it could also involve Flynn working as a lobbyist for the Turkish government while attending secret intelligence briefings with then-candidate Donald Trump.

"It would not surprise me at all if what the prosecutors said to Flynn's lawyers is, 'We haven't reached any conclusions on the Russian matter but we have your guy dead to rights for not registering under the laws requiring registration as a foreign agent and second of conspiring to engage in kidnapping. You better come in and make a deal,'" he said.

More from NBC News:
How Trump The Dealmaker Failed On Health Care
Tillerson to Visit NATO in March, After News He Could Skip Meeting
Nunes Had Secret White House Meeting Before Trump Monitoring Claim