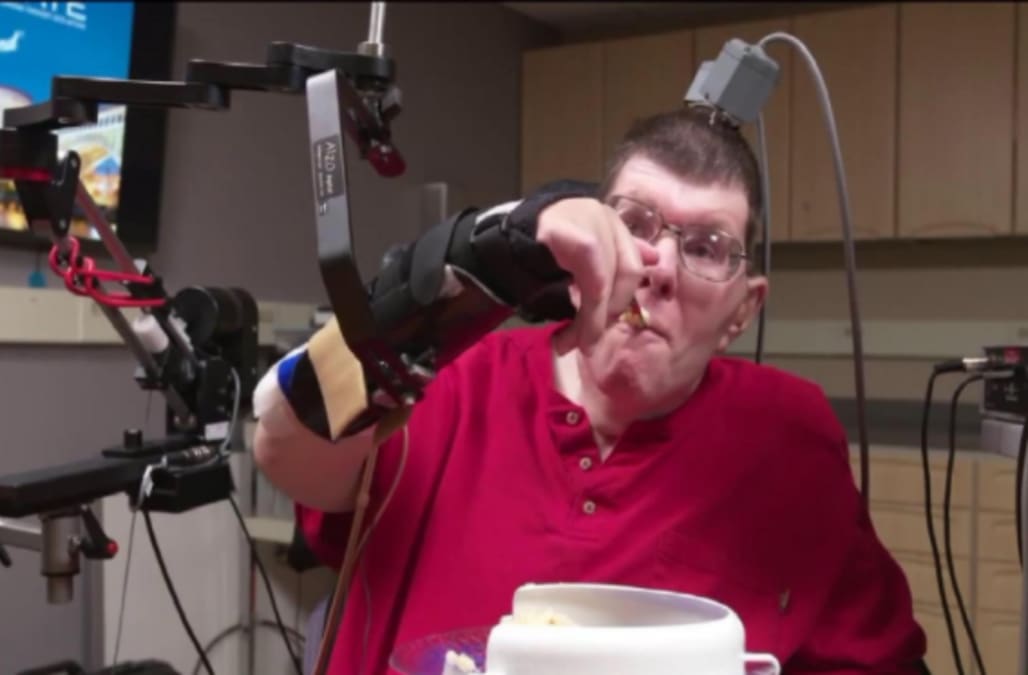 CLEVELAND, Ohio (WJW) -- Restoring movement to the body with just a simple thought.

Bill Kochevar, 56, of Cleveland became paralyzed from his shoulders down, after a bicycling accident in 2006.

"It was raining really badly and I was following a mail truck and I was keeping my distance, everything was fine. But it stopped to deliver a package and I didn't see that it had stopped and I hit right into it head first," said Kochevar.

The quadriplegic hadn't moved his limbs for 8 years...that is, until now.

Kochevar becoming the first person in the world to have arm and hand movements restored, with the help of a new clinical trial called "BrainGate," the brain child of scientists and engineers at Case Western Reserve University and conducted at the Louis Stokes Cleveland VA Medical Center.

Lead study author and biomedical engineer and professor Bolu Ajiboye, Ph.D. said, "For people who have high level spinal cord injury, it represents an opportunity to really consider being able to control things in their environment."

This is how this groundbreaking procedure works: Through electrodes currently implanted just underneath Mr. Kochevar's skull, his brain activity is then sent to this computer, which then deciphers that brain activity into the movement he'd like to make.

To prepare him to use his arm again, Kochevar first learned how to use his brain signals to move a virtual reality arm on a computer screen.

"After we were sure that he was able to control his movements, then we implanted the stimulating electrodes for his muscles and we've been working with him over the last year, year and a half to improve the ability to control those movements," said Robert Kirsch, Ph.D., another study author and biomedical engineer and professor.

And now, the former IT professional is able to grab a mug of water to drink from a straw and eat forkfuls of mashed potatoes; simple tasks many of us take for granted.

While the study is only temporary, Kochevar is hoping to make it permanent.

But he is grateful to be part of history, giving many people just like him hope in restoring a sense of independence.

Kochevar adds, "It helps me, you know, lead a productive life and be happy all the time. And at the end of the day, that's all that matters in life. Yup."

While the clinical trial has already proven effective, advances are still needed to make the technology usable outside of a lab, which would ultimately make the brain implant wireless and permanent.