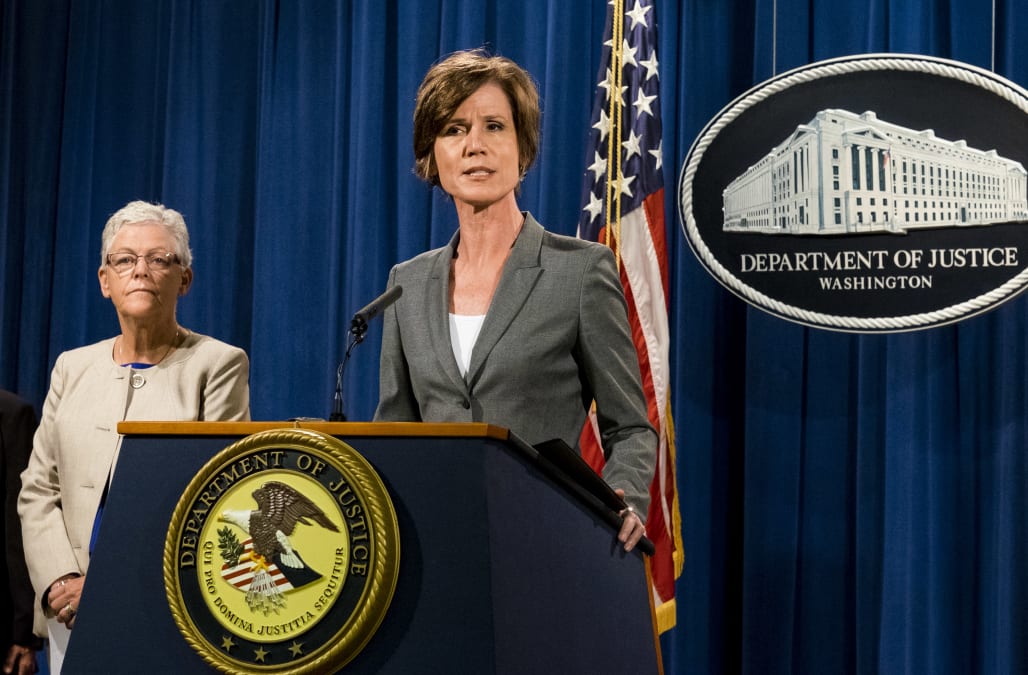 The White House on Tuesday denied a Washington Post report that outlines a White House attempt to prevent the testimony of former Deputy Attorney General Sally Yates before the House Intelligence Committee on Russia's alleged interference in the 2016 election.

"The White House has taken no action to prevent Sally Yates from testifying and the Department of Justice, specifically told her that it would not stop her and to suggest otherwise is completely irresponsible," deputy press secretary Sarah Sanders said in a statement, according to CNN.

According to the Washington Post, the Trump administration sought to block Yates from testifying this week before Congress during an open hearing. A letter obtained by the publication shows the Justice Department informed Yates earlier this month that topics she planned to discuss were considered by the White House to be "covered by the presidential communication privilege."

Deputy Attorney General Sally Q. Yates speaks during a press conference at the Department of Justice on June 28, 2016 in Washington, DC. Volkswagen has agreed to nearly $15 billion in a settlement over emissions cheating on its diesel vehicles.

U.S. Deputy Attorney General Sally Quillian Yates (L) and FBI Director James Comey are sworn in to testify at a Senate Judiciary Committee hearing on "Going Dark: Encryption, Technology, and the Balance Between Public Safety and Privacy" in Washington July 8, 2015.

Flanked by Environmental Protection Agency Administrator Gina McCarthy and Federal Trade Commission Chairwoman Edith Ramirez , Deputy Attorney General Sally Q. Yates speaks during a press conference at the Department of Justice on June 28, 2016 in Washington, DC. Volkswagen has agreed to nearly $15 billion in a settlement over emissions cheating on its diesel vehicles.

U.S. Attorney General Loretta Lynch (2nd L) delivers closing remarks to the Justice Department Summit on Violence Crime Reduction with Deputy Attorney General Sally Quillian Yates (3rd L) and other Justice Department officials at the Washington Plaza Hotel October 7, 2015 in Washington, DC. Lynch invited mayors and police chiefs from 20 cities and other federal officials to the conference to discuss the root causes of crime and strategies for reducing it.

Deputy Attorney General Sally Yates, in her office at the Justice Department, May 15, 2015, in Washington, DC. Yates, who was confirmed by the Senate yesterday, is a former career prosecutor from Atlanta.

WASHINGTON, DC - MAY 08: Former acting U.S. Attorney General Sally Yates (R) and Former Director of National Intelligence James Clapper testify before the Senate Judicary Committee's Subcommittee on Crime and Terrorism in the Hart Senate Office Building on Capitol Hill May 8, 2017 in Washington, DC. Before being fired by U.S. President Donald Trump, Yates had warned the White House about contacts between former National Security Advisor Michael Flynn and Russia that might make him vulnerable to blackmail. (Photo by Chip Somodevilla/Getty Images)
Former Deputy Attorney General Sally Yates is sworn in prior to testifying before a Senate Judiciary Committee hearing on ?Russian interference in the 2016 U.S. election? on Capitol Hill in Washington, U .S., May 8, 2017. REUTERS/Jim Bourg TPX IMAGES OF THE DAY
Former Acting Attorney General Sally Yates and former Director of National Intelligence James Clapper are sworn in before the Senate Judiciary Committee on Capitol Hill, Washington, D.C., U.S. May 8, 2017. REUTERS/Aaron P. Bernstein
Up Next

SEE ALSO: Top Dem tears into House Intel chair Nunes: 'This is what a cover-up to a crime looks like'

"Today's hearing would also have provided the opportunity for former Acting Attorney General Sally Yates to testify about the events leading up to former National Security Advisor Flynn's firing, including his attempts to cover up his secret conversations with the Russian Ambassador," Schiff said in a statement, reports POLITICO.