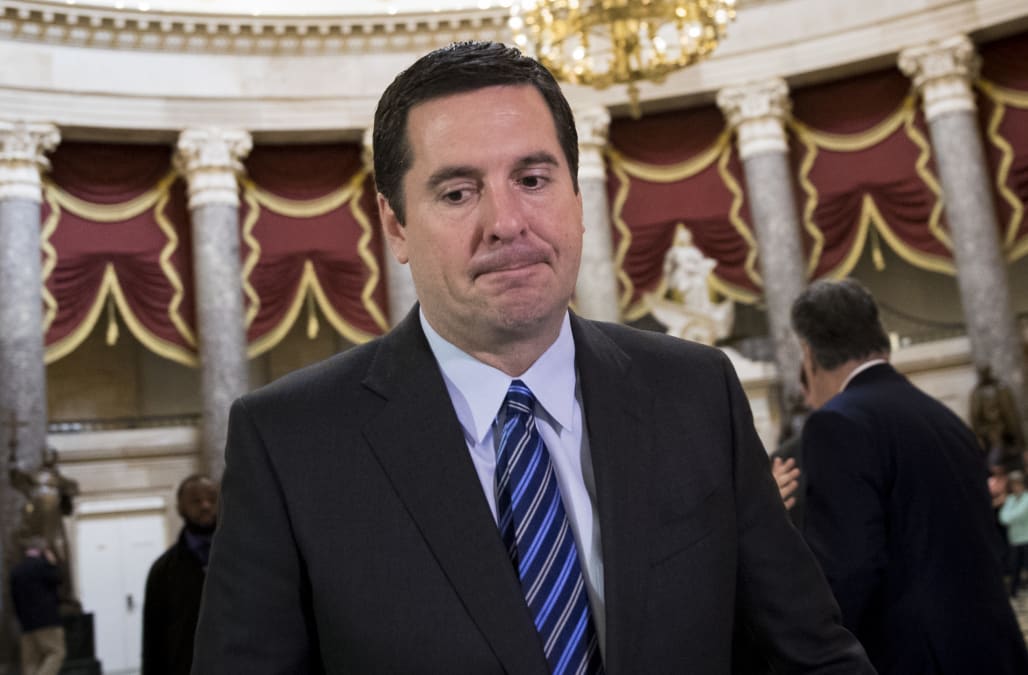 The House Intelligence Committee has scrapped the rest of its meetings this week as calls intensify for Chairman Devin Nunes to step down following his admission that he met with a secret source at the White House to review intelligence reports.

The decision to cancel the meetings was confirmed on MSNBC's "Morning Joe" by Rep. Jim Himes — among the Democrats on the committee demanding that Rep. Nunes recuse himself from the inquiry into alleged Russian meddling in last year's election.

Himes said an intelligence committee meeting Monday was canceled, as well as an open hearing set for Wednesday and an unrelated meeting Thursday.

"Not only has this investigation sort of had a shadow cast on it, but the committee's been put into suspended animation," Himes said

On Monday, Nunes' spokesman confirmed that the chairman met with a source at the White House grounds to look at reports purportedly showing President Donald Trump or his aides were "incidentally" swept up in foreign surveillance by American spy agencies.

Nunes, a California Republican who was a member of the Trump transition team, initially told reporters last week that he had seen such reports, but didn't elaborate on the source.

He's now under criticism for failing to tell the top Democrat on the intelligence committee about his White House visit. It's also unclear why Nunes would even go to the White House to seek a secure location to view classified material when he can do that at the Capitol.

More from NBC News: What Does It Mean That Trump May Have Been 'Incidentally' Surveilled?

Congress is investigating Trump's unverified claim earlier this month that Trump Tower was wiretapped and a larger probe into whether Russia interfered in the presidential election and may have colluded with members of the Trump campaign.

Nunes' visit to the White House has clouded the already complicated inquiry.

Sen. Lindsey Graham said Tuesday on TODAY that Nunes at the very least has "put his objectivity in question" and "lost his ability to lead."

"He's gone off on a lark by himself, a sort of Inspector Clouseau investigation here," Graham said, referring to the bumbling detective of "The Pink Panther" series.

Rep. Eric Swalwell, a Democratic member of the House Intelligence Committee, said on "Morning Joe" that Nunes has compromised the investigation by not properly sharing information.

"It's time for Devin Nunes to leave this investigation, let alone lead it. He should be gone," Swalwell said, adding, "This is what a cover-up to a crime looks like, we're watching it play out right now."