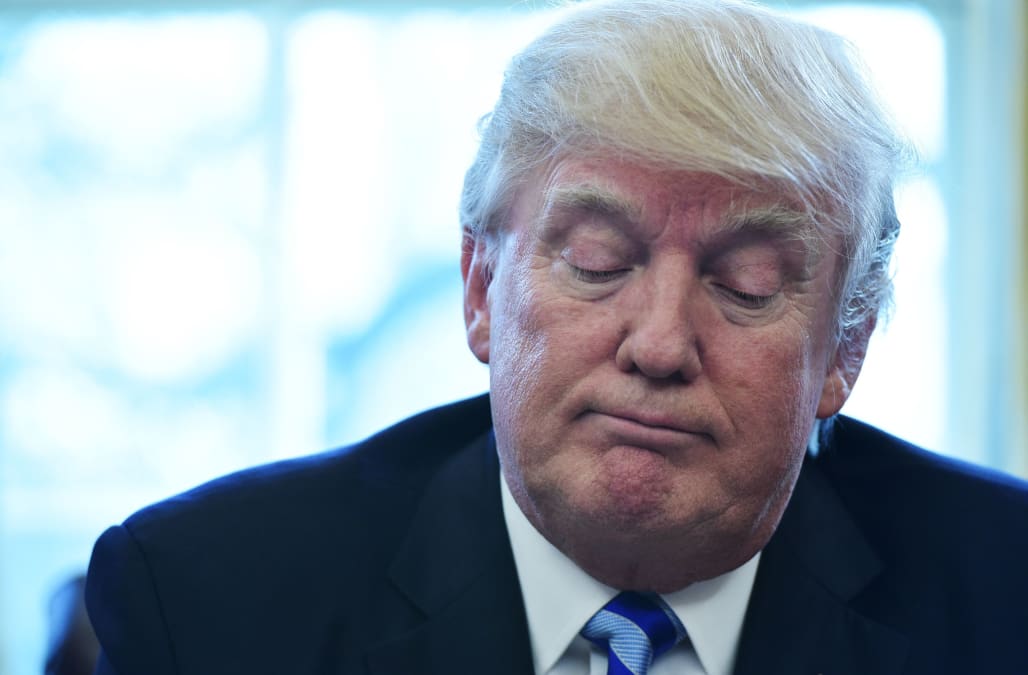 Following a week that many called the worst of his presidency, the president's job approval rating is once again on the decline.

According to the latest Gallup poll, President Donald Trump's approval rating has fallen down to 40 percent. That is a three-point improvement from last week's record low of 37 percent, but Trump's approval number had been on the rise over this past week before diving again over the weekend.

Twitter chuckles at Trumpcare's failure to launch
unsurprisingly, the Trump administration is forcing the GOP to carry this unwanted vote to term
President Trump just called me. Still on phone. "We just pulled it," he tells me.
“You can’t con people, at least not for long. If you don’t deliver the goods, people will eventually catch on.” - The Art of The Deal
The Art of the Deal 1. Don’t learn abt the deal 2. Take someone else’s deal 3. Let 3rd party offer worse deal 4. Beg 5. Give up on the deal
I guess if you don't believe in contraceptives, you go for the pull out method. https://t.co/xUWpCQ2GYL
Source says "You can't always get what you want" is playing in the House conference meeting
https://t.co/MeeRHriEa0
Trumpcare is very popular. https://t.co/w3xFS3VDEF
Paul Ryan pitching TrumpCare today like https://t.co/bG0NGrEpgl
https://t.co/VS9daWXvzV
Key word "living." https://t.co/cE2Wo17dDq
I'm just a bill, 🎵 Yes, I'm only a bill🎵 and I'm sittin' here on- OH MY GODnoOO0MAKE IT STOP!!!!! https://t.co/bHIwD2LZYx
When it comes to the last 24 hours of #TrumpTruck and #TrumpCare, this is really all I can say... https://t.co/8enuOVdYTV
.@GOP https://t.co/kJbke16KqT
ooof the kicker on this New York Times story... https://t.co/YO6Wq3k5vK
imagine being angrier about the crowd size at your inauguration than legislation that affects millions of americans… https://t.co/zQatwphDZm
In Paul Ryan's defense, who could get a group this diverse to agree on anything? https://t.co/S1iua7IWpo
"Make empty threats. Ignore everyone. Hire incompetent people to do important jobs. Blow it all off and go golfing." - The Art of the Deal
Hey Republicans, don't worry, that burn is covered under the Affordable Care Act
Up Next

Trump's numbers do not fare well when compared to prior Republicans presidents either. Over 60 days into President George W. Bush's first term his job approval rating was at a steady 53 percent. President Ronald Reagan sat at 60 percent during that same point in his presidency.

Some polls also suggest the president may be losing core aspects of his base. According to a Quinnipiac University national poll released last week, Trump has begun to lose the support of some of the key demographic groups essential to his historic election victory.

More than half of men, 52 percent, now say they disapprove of Trump's job since taking office, according to the Quinnipiac survey. On March Trump's disapproval among men was only 45 percent.

Trump will be fighting uphill heading into his 10th week as president. Now seemingly at odds with House Republicans, and in the wake of being dealt his first major political blow of failing to repeal and replace Obamacare--a hallmark promise of his 2016 campaign--the president's numbers could sink even lower if the White House has another week like the last.