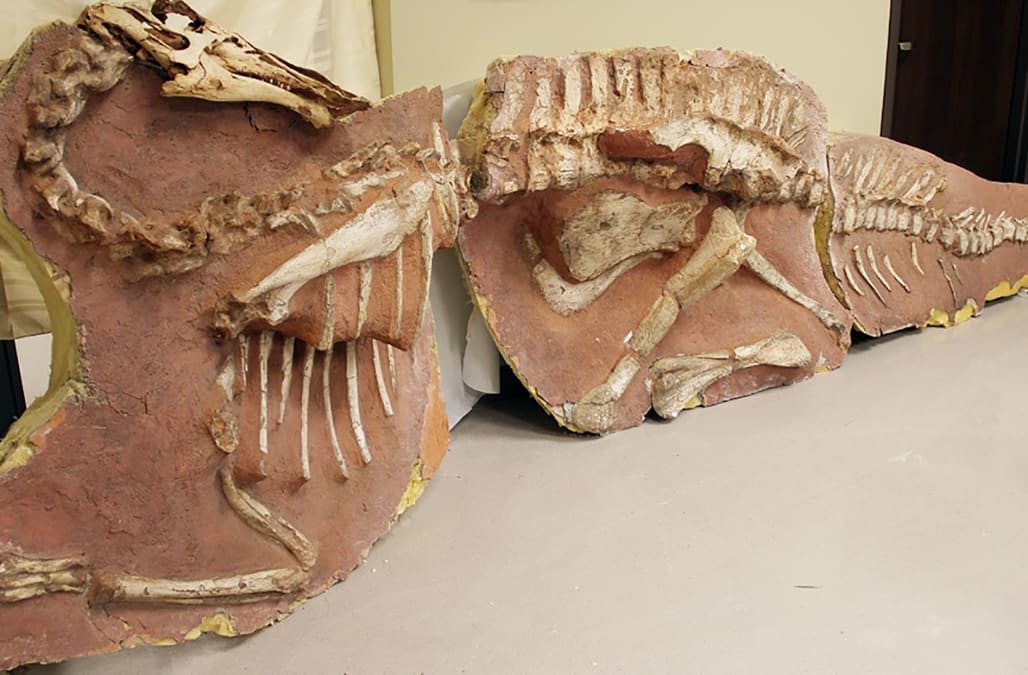 Dinosaurs might be getting a new origin story. And the new theory turns 130 years of dino doctrine on its head.

Scientists have assumed dinosaurs originated somewhere in the southern hemisphere. But researchers writing in the journal Nature think a Scottish fossil better fits the bill for the dinosaurs' common ancestor.

SEE MORE: New Dinosaur Fossil Has A Lot In Common With Its Bird Relatives

But the scientists noticed many dinosaurs in the two categories shared a lot more similarities than differences. That could mean some lizard-hipped dinos need to be relabeled.

The new theory also helps iron out some wrinkles in dino evolution. Now, the dinosaurs that birds likely evolved from are grouped with bird-hipped dinosaurs.

Various dinosaur fossils and skeletons
The Titanosaur, the largest dinosaur ever displayed at the American Museum of Natural History, is unveiled at a news conference January 14, 2016 in New York. The dinosaur was discovered in 2014, in Argentinas Patagonia region. / AFP / DON EMMERT (Photo credit should read DON EMMERT/AFP/Getty Images)
JOHANNESBURG, SOUTH AFRICA NOVEMBER 10(SOUTH AFRICA OUT): Some of the newly discovered fossil seen at the Evolutionary Studies Institute, on November 10, 2015 in Johannesburg, South Africa. The institution's senior researcher, Dr Jonah Choiniere will announce the latest discovery of fossil thought to belong to a 200-million-year-old dinosaur that was discovered in the Karoo basin. (Photo by Simone Kley/Foto24/Gallo Images/Getty Images)
TRENTON, CANADA SEPTEMBER 29: The Wankel Tyrannosaurus Rex shown standing at 12-feet-tall devouring a triceratops is a work in progress at Research Casting International, in Trenton, Canada, on Tuesday, September 29, 2015. The installation will be the centerpiece display at Smithsonian National Museum of American History when the fossil hall reopens in 2019. (Photo by Nikki Kahn/The Washington Post via Getty Images)
TORONTO, ONTARIO, CANADA - 2015/08/21: Close up of the skeleton of a dinosaur on display at the Royal Ontario Museum. The Royal Ontario Museum is a museum of art, world culture and natural history in Toronto, Canada. It is one of the largest museums in North America and attracts over one million visitors every year. (Photo by Roberto Machado Noa/LightRocket via Getty Images)
This photo taken on July 28, 2015 on the archaeological site of Angeac-Charente, southwestern France, shows fossilised dinosaur bones during their unearthing process, a Sauropod dinosaur's femur (R) and an Ornithomimosaur (Ostrich Dinosaur, a new dinosaur species identified on the site, where at least 43 specimen have been inventoried) dinosaur's shinbone (still in a clay gangue). The Angeac dinosaur fossil deposit is unique in France by its abundance; of the thousands of fossils unearthed there, two species until then unknown have been identified. AFP PHOTO / THIBAUD MORITZ (Photo credit should read Thibaud MORITZ/AFP/Getty Images)
TORONTO, ON - JUNE 2: A fossil cast of an Archaeopteryx lithographica, which lived in the Late Jurassic period, 148 million years ago. A new study suggests feathers were less common among dinosaurs than previously believed. Interview with the ROM's Dr. David Evans about his new research that could shake up how we imagine dinosaurs. (Bernard Weil/Toronto Star via Getty Images)
A member of staff poses next to the world's most complete Stegosaurus skeleton at the Natural History Museum in London on December 3, 2014. The fossil is 560cm long and 290cm tall and is made up of over 300 bones. AFP PHOTO / JUSTIN TALLIS (Photo credit should read JUSTIN TALLIS/AFP/Getty Images)
Photo taken on July 29, 2014 shows a 34 cm long phalanx of a Sauropoda dinosaur, discovered during excavations in Angeac-Charente, central-western France. A student in paleontology found the fossil on July 25. The world's largest Sauropoda thigh bone was found on this site in summer 2010. The site was discovered in 2008 and is actively searched since January 2010. AFP PHOTO / JEAN PIERRE MULLER (Photo credit should read JEAN PIERRE MULLER/AFP/Getty Images)
7.5 inch solid resin cast from a Giganotosaurus dinosaur tooth, the U shaped groove along the root shaft of the tooth is where the replacement tooth have been growing. (Photo by: Independent Picture Service/UIG via Getty Images)
Fossilized skull of a Pachycephalosaurus wyomingensis, thick headed lizard, dinosaur from the Cretaceous Period. (Photo By: Education Images/UIG via Getty Images)
UNITED STATES - MARCH 15: Dinosaur fossils preserved in rock, Dinosaur Quarry, Dinosaur National Monument, Utah-Colorado, United States of America. Detail. (Photo by DeAgostini/Getty Images)
LAS VEGAS - SEPTEMBER 30: One of the world's largest set of shark jaws comprised of about 180 fossil teeth from the prehistoric species, Carcharocles megalodon, which grew to the size of a school bus, is displayed at the Venetian Resort Hotel Casino September 30, 2009 in Las Vegas, Nevada. Auctioneers Bonhams & Butterfields hope the fossil will fetch about USD 900,000-1.2 million when it is auctioned off on October 3 at the Venetian as part of their Natural History auction. The centerpiece of the lot of 50 fossils being auctioned is a 66-million-year-old Tyrannosaurus rex skeleton dubbed 'Samson.' The 40-foot-long female dinosaur fossil, excavated in South Dakota in 1992, contains about 170 bones and is said to be the third most complete T. rex skeleton ever unearthed. Bonhams & Butterfields is hoping Samson will fetch more than USD 6 million at the auction. (Photo by Ethan Miller/Getty Images)
Dinosaur Footprint in Rock, Otjihaenamaparero, Namibia, Africa (Photo by Hoberman Collection/UIG via Getty Images)
UNSPECIFIED - AUGUST 14: Mongolia, Gobi Desert, Bayanzag Valley, fossilized dinosaurs egg in desert (Photo by DEA / CHRISTIAN RICCI/De Agostini/Getty Images)
NEW YORK - MAY 10: A fossil of a Microraptor from a 130-million year old forest that existed in what is now Liaoning Province, China is displayed at the new exhibit 'Dinosaurs: Ancient Fossils, New Discoveries' at the American Museum of Natural History May 10, 2005 in New York City. The exhibit, which will open to the public on May 14 and run to January 8, uses recent fossil finds, computer simulations and life size models to trace changes in the thinking about dinosaur biology over the past two decades. (Photo by Spencer Platt/Getty Images)
Up Next