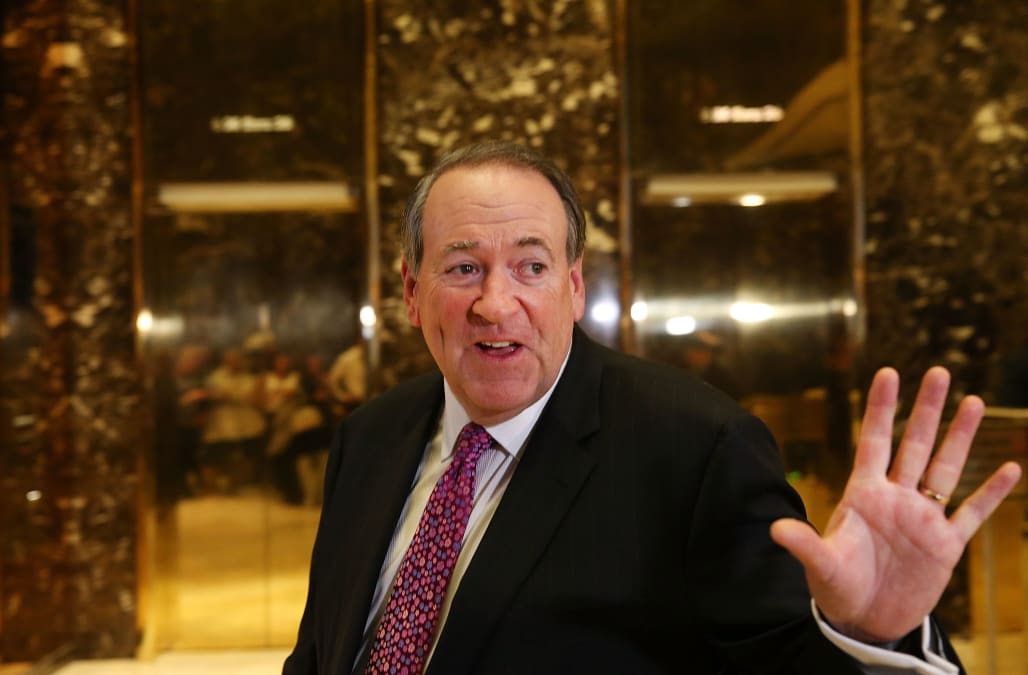 Mike Huckabee has been firing off quite a few tweets recently.

The former governor of Arkansas and noted bass guitarist posted a joke that had the internet up in arms on Tuesday:

The violence the tweet implies reminded a few social media users of a story about how Huckabee's son, David, once allegedly killed a dog at Boy Scout camp.

Poop Dogg has nephew named Bow Wow; both bad dogs who advocate murder and sex slavery for @POTUS and First Lady;Who let the dogs out?

Huckabee has been sharing his humorous political commentary on Twitter for quite some time now -- it started when he suspended his presidential campaign on Feb. 1, 2016.

Hillary Clinton is one of his favorite targets:

Leahy at Gorsuch hearing is more effective than Ambien in inducing sleep; He makes Hillary look like a candidate for Dancing w/ the Stars!

Trump may be a car wreck, but at least his car is pointed in right direction. Hillary is a drunk-driver going the wrong way on the freeway.

Actually, no opposing politician can escape the heat:

At museum in Oslo--wasn't sure if this was Edward Munch's "The Scream" or Nancy Pelosi at Trump speech last week. pic.twitter.com/0ImsZr2kQz

Dems select ticket for 2020. A match made in Transylvania pic.twitter.com/iKLJxPTdVx

Sorry, Russia! You're not safe from the silliness either:

Full disclosure:I have NOT met with Russian AMB, but did have Russian dressing on a salad last September. I'll recuse from salads for a week

Think he won't make a joke about you because you're not a politician? Think again:

Watch celebs spew ignorant political venom at Oscars?? Nah...think I'd rather have a colonoscopy. Both happen from same location.

He likes Lady Gaga, though:

Lady Gaga left politics out but added some high octane talent. She needed to drop the mic. She crushed it.

Even though he isn't holding elected office right now, he still has quite a few hot takes about policy decisions:

And of course, he loves meat:

Friend sent T'giving recipe: How to prepare Tofu:
a. Throw it in the trash
b. Grill, smoke or deep fry some meat

Like it or not, Huckabee is going to keep firing off political puns:

I Tweet for my amusement and your amazement. To haters trolls and humorless people-you really shouldn't follow me. It's way over your head!

Read more of his tweets:

Mike Huckabee loves Twitter
WEATHER ALERT: D.C. Government offices shut down by #Snowzilla & that means no work is being done. How's that any different than normal?
CNN launching its own social media platform to rival Zuckerburg's-Zucker vs. Zuckerburg. CNN will call their new site "FakeBook."
If someone @McDonaldsCorp tweeted hateful remark re: @POTUS and not fired & apology given, then hope stock goes down as badly as the burgers
Crack journalists at CNN have "fake journalist" guest saying Trump sneaked his own taxes to him. Best comedy on TV! How low can they go??
Rachel Maddow will release HER tax returns on her show tomorrow. Or maybe not. Why not? Might show how much the Russians paid her!
Don't miss it! Rachel Maddow will reveal who shot J. R. Ewing on the series "Dallas." Sure it was the 80's, but it's RACHEL MADDOW!
Tomorrow night Rachel Maddow solves the Kennedy Assassinaton. Will name Oswald as assassin. Don't miss REAL JOURNALISM!
News flash! Rachel Maddow knows who won the 2016 World Series and will spend 30 minutes of her next show teasing the winner.
Grab the Garden Hose of Reality and spray cold water on the Chihuahuas!Trump right to get resignations of those who won't support his agenda
Liberals end CA drought by crying river of tears cause mean ol' @realDonaldTrump fired Obama political appointees! Kleenex stocks up 400%!
Some goon on CNN going postal because new administration is replacing US attorneys like it's unusual. CNN-Crazed Newsless Nuthouse.
Up Next