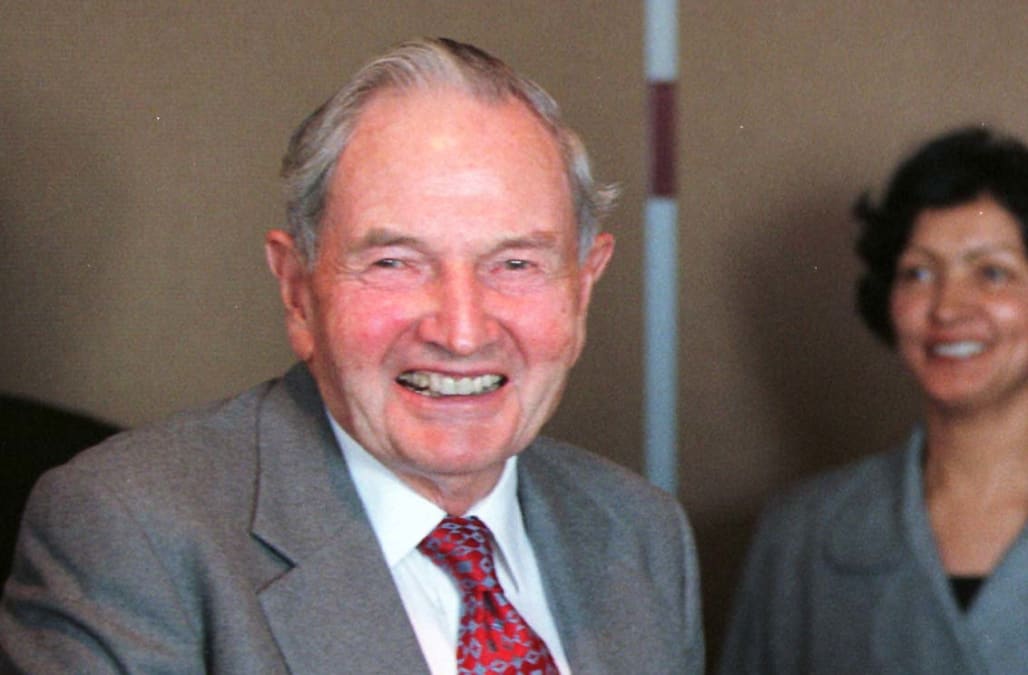 NEW YORK, March 20 (Reuters) - Billionaire philanthropist David Rockefeller, former head of Chase Manhattan Corp and patriarch of one of the most famous and influential American families, died on Monday, a family spokesman said. He was 101.

Rockefeller, who reportedly gave away nearly $2 billion in his lifetime, died in his sleep of congestive heart failure at his home in Pocantico Hills, New York, spokesman Fraser Seitel said in a statement.

One of the few remaining links to the U.S. "gilded" era of robber barons, he was the son of John D. Rockefeller Jr., who developed New York's Rockefeller Center, and was the last living grandson of oil tycoon John D. Rockefeller, founder of Standard Oil and the family dynasty. He also embodied an era when globe-trotting bank chiefs worked with the world's most powerful politicians.

During his time as head of Chase from 1969 to 1981, Rockefeller forged such a network of close relationships with governments and multinational corporations that observers said the bank had its own foreign policy.

RELATED: David Rockefeller through the years

The Rockefeller name came to symbolize unpopular U.S. banking policies in debtor countries, and Rockefeller was scorned on the left for working with Chile's Augusto Pinochet and the shah of Iran.

He also was viewed with anger on the right for pushing to open trade with China and the Soviet Union during the Cold War. The Trilateral Commission, a group Rockefeller founded in 1973 to foster relations between North America, Japan and Western Europe, came to be a regular target of the far-right and conspiracy theorists who said it was trying to create a one-world government.

Rockefeller became embroiled in an international incident when in 1979 he and long-time friend Henry Kissinger helped persuade President Jimmy Carter to admit the shah of Iran to the United States for treatment of lymphoma, helping precipitate the Iran hostage crisis.

Born in Manhattan as the youngest of six siblings, Rockefeller spent his childhood in New York City and at the family's estates, and recalled meeting such luminaries as Charles Lindbergh, Admiral Richard Byrd and Sigmund Freud.

His ties to the internationally famous continued throughout his adulthood, symbolized by his famed 100,000-card Rolodex, housed in its own room next to his office in Manhattan's Rockefeller Center.

The site of the nine-story mansion where he was born, then New York's largest residence, is now part of the Museum of Modern Art, which his mother, Abby, helped found in 1929.

Rockefeller collected beetles as a lifelong hobby and also acquired art - a Mark Rothko painting he bought in 1960 for less than $10,000 was auctioned for more than $72 million in May 2007.

His fortune, investments in real estate, share of family trusts and other holdings were estimated at $3.3 billion in March 2017 by Forbes magazine. Seitel said Rockefeller had donated nearly $2 billion in his lifetime to organizations including the Museum of Modern Art in New York and Rockefeller University.

RELATED: The Rockefeller Center Christmas tree through the years

In May 2015, he made a rare public appearance in Maine to mark his approaching 100th birthday by donating 1,000 acres (405 hectares) for preservation on exclusive Mount Desert Island.

Chase Manhattan grew from a $4.8 billion institution in 1946 when he joined to a bank with $76.2 billion in assets when he stepped down in April 1981. But it slipped from its standing then as No. 3 in the world and was purchased by Chemical Bank of New York in 1996. Today it is part of JPMorgan Chase & Co.

He published his autobiography, "Memoirs," in 2002 and continued going to work every day into his 90s.

He remained a lifelong member of the moderate "Rockefeller Republicans" wing of that party, including his 2006 co-founding of Republicans Who Care, to support the party's moderates.

Rockefeller earned a degree from Harvard University in 1936 and did graduate work at the London School of Economics, where he met future President John F. Kennedy and dated his sister Kathleen. He was awarded a Ph.D in economics from the University of Chicago in 1940.

From 1940 to 1941 he was secretary to New York Mayor Fiorello LaGuardia and in 1942 he enlisted in the U.S. Army, serving in military intelligence in North Africa and France. Rockefeller was awarded the French Legion of Honor.

Rockefeller's wife, Peggy, died in 1996. They had six children and 10 grandchildren.

More from AOL.com:
Father shares heartbreaking photos of daughter who hung herself due to bullying
Young children die while visiting their grandfather
Toddler dies in house fire blamed on hoverboard