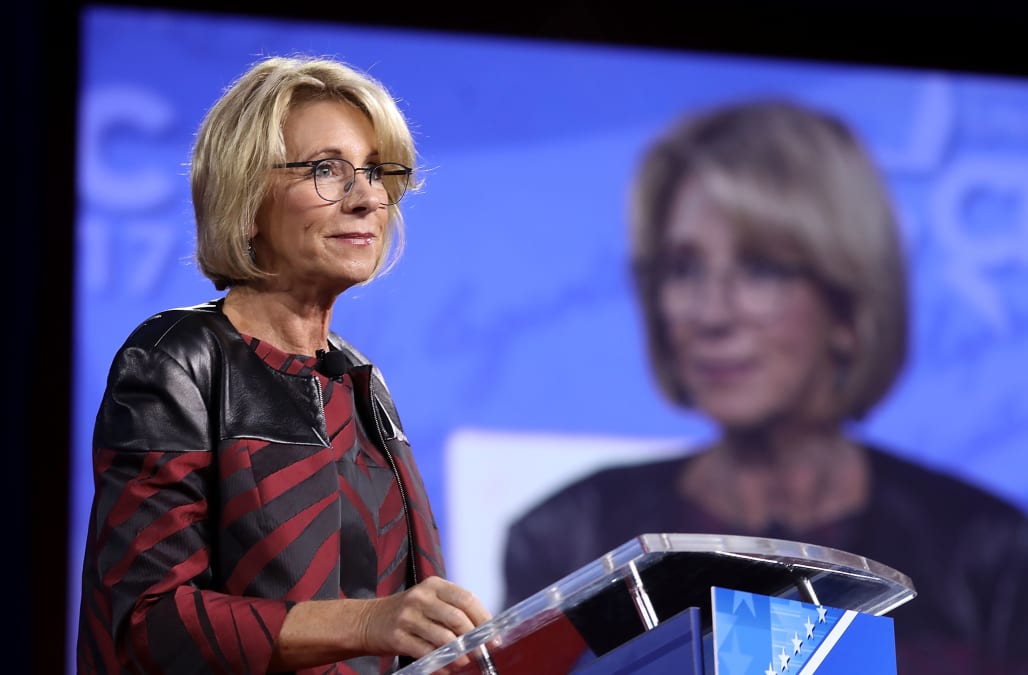 "The president promised to invest in our underserved communities and our increased investment in choice programs will do just that," said DeVos, discussing the president's fiscal 2018 budget proposal publicly for the first time since its release last week.

Betsy DeVos through the years

"This budget maintains our department's focus on supporting states and school districts with the goal of providing an equal opportunity of a quality education for all students," she said, speaking at the National Association of State Boards of Education's legislative conference in Washington. "This budget also continues support for our nation's most vulnerable populations, including students with disabilities."

Trump's spending blueprint would pour $1.4 billion into school choice policies while shrinking overall discretionary spending for the department by 13 percent, from $68 billion to $59 billion.

The billion-dollar increase aimed at expanding school choice would come in the form of a proposed $168 million boost for charter schools, $250 million for a new school choice program centered around private schools and a $1 billion increase for Title I, the largest federal K-12 program that provides school districts with funding for poor students.

The budget proposal provides no details about the new private school program, but says the boost to Title I would be used to encourage adoption of an education funding system that allows students to use funding to go to a public school of their choice – a category that ostensibly includes charter schools.

Organizations including teachers unions, civil rights groups and groups that represent school boards, superintendents and principals slammed the president's spending plan last week, arguing its drastic cuts would be disastrous for the country's most disadvantaged students.

The president would eliminate some 20 department programs, including the $2.4 billion Title II program for teacher development and preparation.

"Taxpayers expect that their dollars will be spent efficiently and effectively," DeVos said Monday. "This budget reflects an intention to invest in education programs that work while reducing duplicative programs and empowering states and localities."

Her speech, which contained word-for-word parts of recent addresses she has given to the Council of the Great City Schools and the National Lieutenant Governors Association, also focused on states' ongoing implementation of the new federal education law, the Every Student Succeeds Act.

The law, she stressed, should provide states with the opportunity to create accountability systems that fit their individual, unique needs.

Moreover, she said, states should provide the Department of Education "only what's absolutely necessary" in regard to reporting requirements for student outcomes.

"Under ESSA, we hope you will heartily embrace policies that best fit the needs of your students," she said.