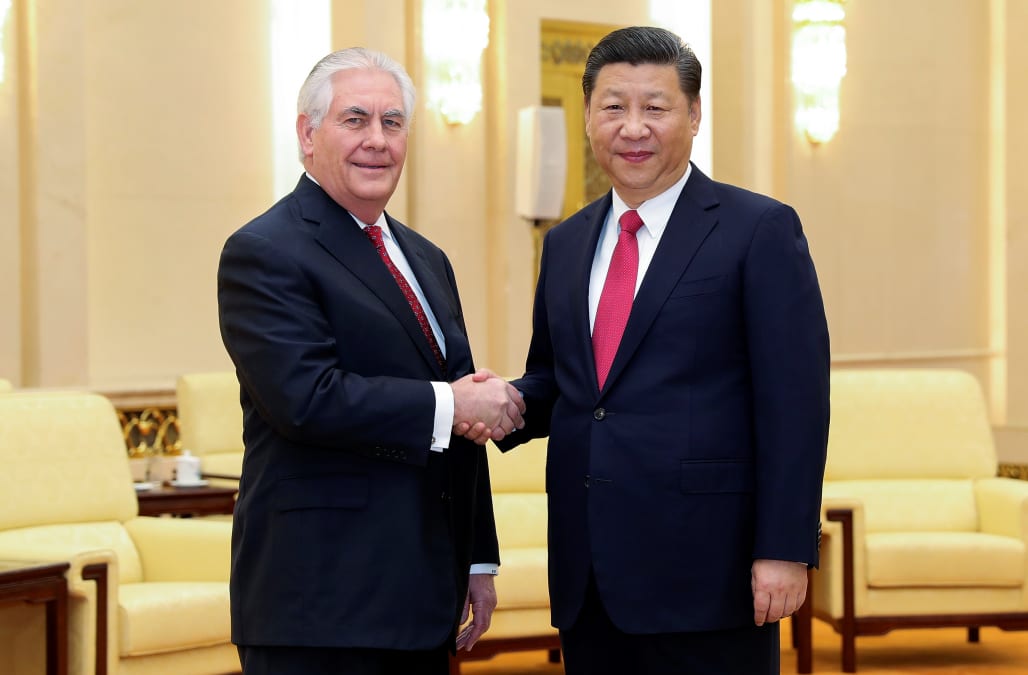 BEIJING, March 19 (Reuters) - With warm words from Chinese President Xi Jinping on Sunday, U.S. Secretary of State Rex Tillerson ended his first trip to Asia since taking office with an agreement to work together with China on North Korea and putting aside trickier issues.

China has been irritated at being repeatedly told by Washington to rein in North Korea's nuclear and missile programs and the U.S. decision to base an advanced missile defense system in South Korea.

Beijing is also deeply suspicious of U.S. intentions towards self-ruled Taiwan, which China claims as its own, with the Trump administration crafting a big new arms package for the island that is bound to anger China.

But meeting in Beijing's Great Hall of the People, those issues were brushed aside by Xi and Tillerson, at least in front of reporters, with Xi saying Tillerson had made a lot of efforts to achieve a smooth transition in a new era of relations.

"You said that China-U.S. relations can only be friendly. I express my appreciation for this," Xi said.

Xi said he had communicated with President Donald Trump several times through telephone conversations and messages.

"We both believe that China-U.S. cooperation henceforth is the direction we are both striving for. We are both expecting a new era for constructive development," Xi said.

"The joint interests of China and the United States far outweigh the differences, and cooperation is the only correct choice for us both," Xi added, in comments carried by China's Foreign Ministry.

China and the United States must strengthen coordination of hot regional issues, respect each other's core interests and major concerns, and protect the broad stability of ties, Xi said.

Tillerson replied that Trump looks forward to enhancing understanding with China and the opportunity for a visit in the future.

Tillerson said Trump places a "very high value on the communications that have already occurred" between Xi and Trump.

"And he looks forward to enhancing that understanding in the opportunity for a visit in the future," Tillerson said.

"We know that through further dialog we will achieve a greater understanding that will lead to a strengthened, strengthening of the ties between China and the United States and set the tone for our future relationship of cooperation."

Trump has so far been an unpredictable partner for China, attacking Beijing on issues ranging from trade to the South China Sea and in December by talking to Taiwan President Tsai Ing-wen.

Before Tillerson arrived in Beijing on Saturday, Trump said North Korea was "behaving very badly" and accused China of doing little to resolve the crisis over the North's weapons programs.

Speaking in Seoul on Friday, Tillerson issued the Trump administration's starkest warning yet to North Korea, saying in Seoul that a military response would be "on the table" if Pyongyang took action to threaten South Korean and U.S. forces.

Still, China and the United States appeared to have made some progress or put aside differences on difficult issues, at least in advance of a planned summit between Xi and Trump.

RELATED: Chinese President Xi Jinping in the US

Both Tillerson and Chinese Foreign Minister Wang Yi struck a more conciliatory tone in their meeting, with Tillerson saying the United States and China would work together to get nuclear-armed North Korea take "a different course."

Underscoring the tensions, North Korea conducted a test of a new high-thrust engine at its Tongchang-ri rocket launch station and leader Kim Jong Un said the successful test was "a new birth" of its rocket industry, Pyongyang's official media said on Sunday.

North Korea has conducted five nuclear tests and a series of missile launches, in defiance of U.N. sanctions, and is believed by experts and government officials to be working to develop nuclear-warhead missiles that could reach the United States.

Washington wants China, the North's neighbor and main trading partner, to use its influence to rein in the weapons programs.

China says it is committed to enforcing U.N. sanctions on North Korea, but all sides have a responsibility to lessen tensions and get back to the negotiating table.

Chinese official also repeatedly say they do not have the influence over North Korea that Washington and others believe, and express fears poverty-struck North Korea could collapse if it were cut off completely, pushing destabilizing waves of refugees into northeastern China. (Writing by Ben Blanchard; Editing by Raju Gopalakrishnan)