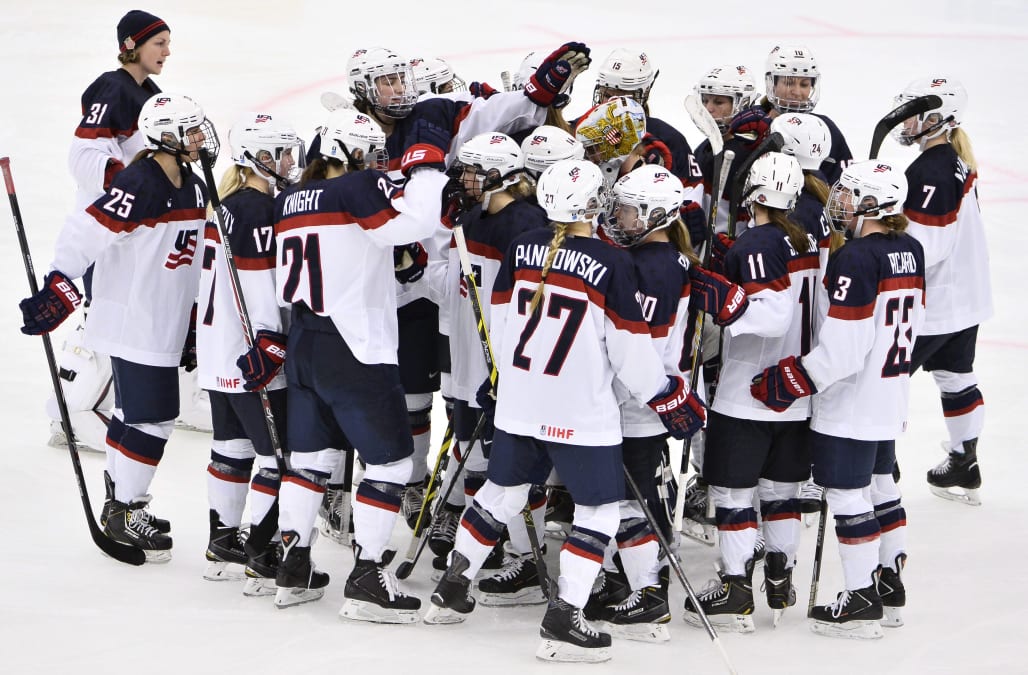 The United States women's national ice hockey team announced on Wednesday that it will not play in the upcoming IIHF World Championship unless "significant progress has been made on the year-long negotiations with USA Hockey over fair wages and equitable support."

The tournament begins on March 31 in Plymouth Michigan, but the Americans said that after a year of stalled negotiations with USA Hockey they are prepared to not show up to training camp in Michigan on March 21.

The team is currently the defending world champion, and have won six of the last eight World Championships. However, they feel that USA Hockey has not compensated them accordingly.

"We are asking for a living wage and for USA Hockey to fully support its programs for women and girls and stop treating us like an afterthought," captain Meghan Duggan said, according to ESPN. "We have represented our country with dignity and deserve to be treated with fairness and respect."

Women in hockey
TAMPA, FL - SEPTEMBER 23: Goalie Manon Rheaume #33 of the Tampa Bay Lightning sits on the bench during an NHL preseason game against the St. Louis Blues on September 23, 1992 at the Expo Hall in Tampa, Florida. (Photo by B Bennett/Getty Images)
2 Feb 2001: Cammi Granato #21 of the USA holds her hockey stick during the game against Canada at the 2001 Womens Challenge at the Pepsi Center in Denver, Colorado. Team USA beat Team Canada 3-2Mandatory Credit: Brian Bahr /Allsport
TORONTO, ON - NOVEMBER 07: Angela James #8 of the Canada Legends skates against the USA Legends at the Legends Classic Hockey Game at the Air Canada Centre on November 7, 2010 in Toronto, Canada. (Photo by Bruce Bennett/Getty Images)
06/22/10 - RICHMOND HILL, ONTARIO - Angela James will be the first Canadian, and one of the first two women, elected to the Hockey Hall of Fame. She's seen in her Richmond Hill home with her 3 kids and partner, Angela McDonald. (Photo by Rick Madonik/Toronto Star via Getty Images)
Laura Schuler of Canada congratulates teammate Geraldine Heaney after she scored goal 08 February during the women's preliminary round at the Nagano Olympics 08 February. Canada won 13-0. AFP PHOTO/OLIVIER MORIN (Photo credit should read OLIVIER MORIN/AFP/Getty Images)
TORONTO, ON - NOVEMBER 08: Geraldine Heaney, who will enter the Hockey Hall of Fame on November11, is honored prior to the game between the Toronto Maple Leafs and the New Jersey Devils at the Air Canada Centre on November 8, 2013 in Toronto, Canada. (Photo by Bruce Bennett/Getty Images)
TORONTO, ON - FEBRUARY 25: Canada's Olympic flag bearer and four-time Olympic gold medalist Hayley Wickenheiser returned to home soil at Toronto Pearson Airport Tuesday afternoon and waved to cheering fans. (Lucas Oleniuk/Toronto Star via Getty Images)
TURIN, ITALY - FEBRUARY 20: Krissy Wendell #7 of the United States controls the puck during the women's ice hockey bronze medal match against Finland during Day 10 of the Turin 2006 Winter Olympic Games on February 20, 2006 at the Palasport Olimpico in Turin, Italy. (Photo by Brian Bahr/Getty Images)
Toronto, Canada - March 21 - Toronto's Natalie Spooner smiles and looks around during the national anthem. Toronto Furies beat the Montreal Stars 2-1 in a shootout in the semi-final game of the Clarkson Cup in Markham. The Clarkson Cup is the Canadian Women's Hockey League's Championship. March 21, 2014 (Richard Lautens/Toronto Star via Getty Images)
US Hilary Knight (L) and US Kendall Coyne celebrate after teammate US Alex Carpenter (not seen) scores during the Women's Ice Hockey Gold Medal Game between Canada and USA at the Bolshoy Ice Dome during the Sochi Winter Olympics on February 20, 2014. AFP PHOTO / JONATHAN NACKSTRAND (Photo credit should read JONATHAN NACKSTRAND/AFP/Getty Images)
Up Next

In the past, the women on the team have earned $1,000 a month during the six-month residency period leading up to the winter Olympics. But the players say that they are paid virtually nothing by USA Hockey during the rest of the time, and instead make the bulk of their money from the U.S. Olympic Federation.

"It is a full-time job and to not get paid is a financial burden and stress on players obviously. That is the conversation my husband and I are having right now," said team member Jocelyne Lamoureux-Davidson. "Is playing going to be more stress than we can handle? Sadly it becomes a decision between chasing your dream or giving in to the reality of the financial burden."

As ESPN noted, national governing sports bodies are required to provide equal support for men's and women's teams. The women's hockey team does not feel this is the case. From ESPN:

"The Ted Stevens Olympic and Amateur Sports Act requires national governing sports bodies to "provide equitable support and encouragement for participation by women where separate programs for male and female athletes are conducted on a national basis," as is the case in hockey. According to the players, USA Hockey spends approximately $3.5 million annually to support a schedule of more than 60 games a season for boys participating in its national team development program. There are no comparable development opportunities for girls."

USA Hockey supports the equitable treatment of our female athletes, a commitment going back decades: https://t.co/fTfFM8g24Apic.twitter.com/s6w4kLDFiu

The women's hockey team cited the women's soccer team as pioneers for their boycott.

"We are fortunate to have strong pioneers who have changed the landscape of their sport. Figures such as Billie Jean King or teams like U.S. women's soccer have built a foundation not only for hope, but for action. As leaders in the sport of hockey, we are asking for equitable support and encouragement for participation for women," said player Hilary Knight. "This is another important step for women in sports, but also for women at large and for generations to come in our fight for equal pay and support."

"It's hard to believe that, in 2017, we still have to fight so hard for basic equitable support. But when I think about the women who paved the way for our team — and when I see girls at rinks around the country who are dedicated to pursuing big dreams and look to us to lead by example — it's well overdue for us to speak up about unfair treatment, even if it means sacrificing an opportunity to represent our country. We owe the next generation more than that. We owe it to ourselves to stand up for what is right."

USA Hockey was not immediately available for comment at the time of publication.

NOW WATCH: This is why fighting is allowed in pro hockey — and why the NHL has no plans to ban it