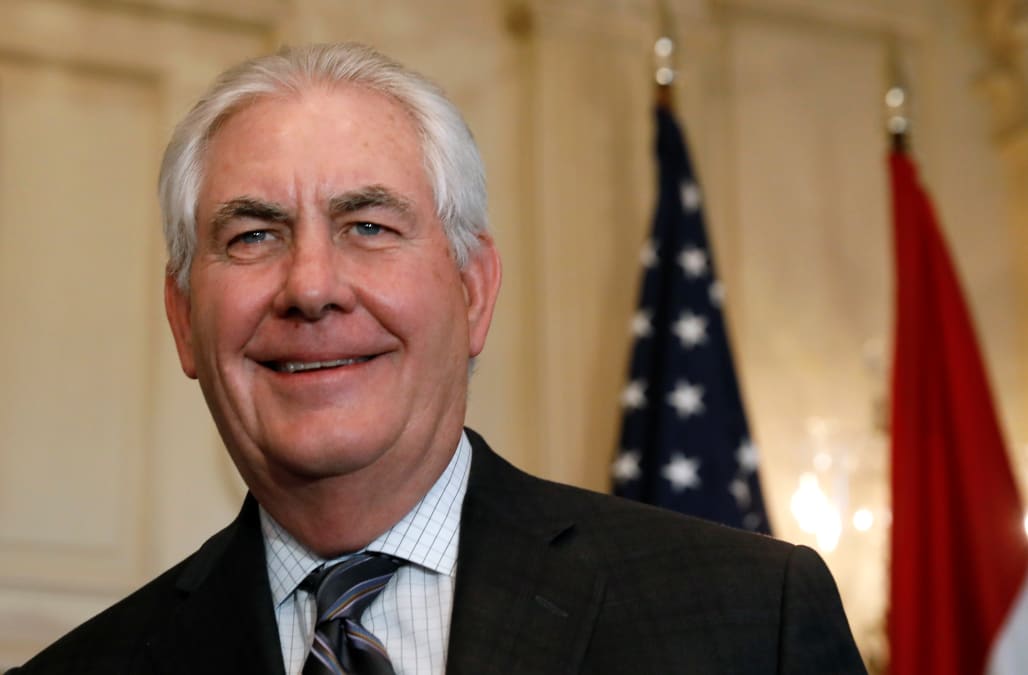 OVER THE PACIFIC OCEAN, March 15 (Reuters) - U.S. Secretary of State Rex Tillerson is traveling to Asia this week accompanied by only one reporter, a White House correspondent from the Independent Journal Review (IJR), a digital news outlet founded in 2012 by former Republican political operatives.

The IJR said in a statement late Tuesday the State Department last week offered one of its reporters, Erin McPike, a place aboard the Secretary's aircraft on his trip this week to Asia.

State Department officials did not immediately respond to requests for comment on why IJR and McPike were chosen to travel with Tillerson.

The State Department had previously told reporters covering Tillerson's trip to South Korea, Japan, and China that he would not be taking reporters on his plane and that they would have to fly commercially, breaking with decades of precedent stretching back to Henry Kissinger.

McPike is a White House correspondent for IJR, and previously reported for CNN, Real Clear Politics, NBC News, and National Journal, according to a statement on IJR's website when she joined the site in February. She also briefly covered the 2016 election campaign for Reuters.

"We don't take this opportunity lightly and recognize the controversy surrounding press access for the trip," Alex Skatell, IJR's founder and chief executive, said in a statement on Tuesday.

"Last week, the State Department officially offered McPike an opportunity to cover the secretary's upcoming trip to Asia. An official explained that the delegation would be flying on a smaller plane than normal and that press access would be limited. After editorial consultation, McPike accepted the seat."

Thus far, McPike has not filed any "pool reports" that reporters traveling with a Secretary of State customarily file, to inform colleagues not with the secretary of statements or actions by the top U.S. Diplomat.

The State Department Correspondents Association, which represents reporters who cover U.S. diplomacy, said in a statement that it was "disappointed" Tillerson chose to travel to Asia without a full contingent of media "or even a pool reporter."

"After saying it was unable to accommodate press on the Secretary's plane to Asia due to space and budget constraints, the State Department offered a unilateral seat to one reporter," the statement said.

A spokesman for IJR, Matt Manda, did not immediately respond to a request for comment on whether McPike would file pool reports to colleagues, or whether IJR had any comment on the SDCA's statement.

For decades, secretaries of state have nearly always invited media to travel with them. In rare cases, particularly late in a secretary's tenure, some outlets have declined the invitations, such as for former Secretary John Kerry's December 2016 trip to Saudi Arabia.

Republican secretaries of state Alexander Haig, George Shultz, James Baker, and Condoleezza Rice routinely took 10 or more journalists on their overseas trips, even to conflict zones such as Lebanon and Central America.

Up through Tuesday, just hours before Tillerson was scheduled to leave, the State Department declined to confirm whether there would be any reporters on Tillerson's plane.

Acting State Department spokesman Mark Toner said in a phone briefing with reporters on Tuesday that the agency was considering "having a seat available" on his plane.

News organizations that travel with U.S. officials pay the U.S. government for the cost of their air travel.

The conservative-leaning outlet, which bills itself as a digitally savvy news source for millennials, has 35 million monthly readers and more than 50 reporters, according to its website. Skatell told the New York Times in 2014 that he wanted to start a site after observing a gap in reaching "a more mainstream center-right audience."

IJR reports on a wide range of political and national news, specializing in short items with punchy headlines. Trending Tuesday headlines on the site included "Planned Parenthood Executive Makes Bigtime Humiliating Mistake of Going on Tucker Carlson's Show" and "Dem. Congressman Warned Not Once, Not Twice, But Three Times — Then Officers Put Him in Handcuffs."

(Reportng by Yeganeh Torbati on a flight from San Francisco to Seoul; Additional reporting by Arshad Mohammed in Washington; Editing by Sam Holmes)