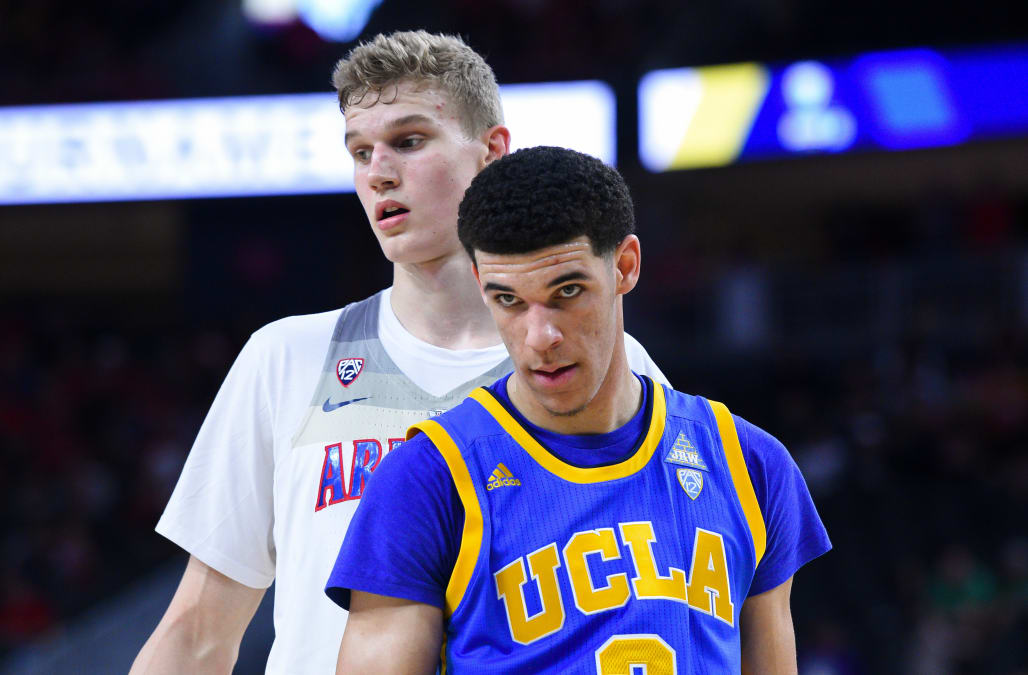 The NCAA Tournament represents the perfect platform for future NBA stars to improve their draft stock for the scouts watching and raise their name recognition with casual fans. Guys like Carmelo Anthony and Kemba Walker have made March Madness their personal coming out party by carrying their teams to the promised land.

There's a handful of freshmen phenoms set to battle in this year's Big Dance who could win over America's hearts and minds by orchestrating a championship run for the ages. That might seem like a tall task for men who aren't even legally allowed to consume alcohol yet, but their opponents should underestimate these future NBA standouts at their own peril.

Unfortunately, Lonzo Ball's considerable talent has occasionally been overshadowed this season by his father Lavar's absurd grabs at attention -- the former college benchwarmer recently claimed he could have beaten Michael Jordan in one-on-one at the peak of his powers.

Last week, Lavar also opined that his freshman son is better than two-time reigning NBA MVP Steph Curry. Somehow, even though Ball's shooting motion is an eyesore compared to Curry's silky-smooth release, the possibility of that assertion echoing true one day isn't as crazy as it sounds.

Lonzo Ball ends a ridiculous half of basketball with a 30-footer. pic.twitter.com/7vOa7UfPLe

Ball has been the catalyst for a team that won just 15 games last year, averaging 14.6 points, 7.7 assists and 6.3 rebounds per game. The 20-year-old has an unteachable feel for passing, just like the greats do. And he's made a crisp 41 percent of his three-point shots this season.

Truthfully, there's no arguing that Ball is a better prospect than Curry was at his age. Curry leapt into the national consciousness by carrying Davidson to the Elite Eight as a sophomore back in 2008 -- and then stayed in college for another year to hone his point guard instincts. Ball is already undoubtedly ready for a jump to the professional ranks, yet there's more at stake for him this March. He could lay his claim as the No. 1 overall pick in the 2017 NBA Draft if he guides the Bruins through a region full of blue bloods in Kentucky and North Carolina, then through the Final Four gauntlet into the history books.

Hopefully, for all our sakes, Lavar lets his son bask in the spotlight for the next few weeks.

Duke is peaking at the right time, having just won the ACC tournament after a chaotic season rife with head-scratching losses, facepalm-worthy moments from Grayson Allen and even a back surgery for coach Mike Krzyzewski.

The most obvious reason for the Blue Devils' sudden course correction is freshman forward Jayson Tatum's timely maturation. He topped 20 points in three of Duke's four ACC tourney victories (and scored 19 in the final against Notre Dame) after only reaching that threshold four times in the squad's 31 regular season games.

A projected top 10 pick in the 2017 NBA Draft, Tatum is the most heralded prospect in Duke's decorated freshman class. He might be the best one-on-one player in the collegiate ranks, possessing incredible athleticism and scoring ability off the dribble while also showcasing defensive potential. The only piece missing from his offensive repertoire is a reliable three-point shot.

When a team's offensive flow is disrupted, it needs a go-to guy who can make something out of nothing and get buckets. Tatum is that guy for the odds-on favorite to take home the hardware.

This Kentucky team has flown under the radar compared to most of their predecessors this decade. There's no DeMarcus Cousins or Anthony Davis on this roster who can control the post night in and night out.

That's put more pressure than usual on the team's backcourt, but freshman Malik Monk has largely handled that extra responsibility with aplomb. He's scored 20.4 points per game while sinking 40 percent of his three-pointers, and has made it known he's not afraid of the big moment.

Monk has the highest ceiling of any guard to come through Big Blue since John Wall. That's no small advantage in a tournament that's usually decided by ball handlers who aren't afraid to let it fly.

Lauri Markkanen, and his status as a projected lottery (top 14) pick in this summer's NBA Draft, is a symbol of the sport's modern affinity for spacing and positionless basketball.

The seven-footer from Finland possesses the range of a sniper, having converted a whopping 43 percent of his shots from downtown. His magnum opus was a 29-point outburst against UCLA in the Pac-12 conference semifinals, in which he launched a season high 10 three-pointers -- making four of them -- while also showcasing soft hands and athleticism down low. The Bruins didn't have a big man who could capably cover Markkanen on the perimeter, and it badly cost them in the 86-75 defeat.

Let that serve as a warning to whoever lines up opposite Arizona. In fact, one of the Wildcats' potential Sweet 16 opponents features a superb defensive prospect who could find himself guarding Markkanen in an intriguing matchup of contrasting styles.

Unlike Markkanen, Jonathan Isaac doesn't represent much of a spot-up shooting threat. Not yet, anyway -- the consensus is he'll eventually develop a respected "3-and-D" skill set in the NBA even though he's averaging a relatively modest 11.9 points per game for the Seminoles.

For now, Isaac's biggest impact is on the defensive side of the court. But don't let that temper your excitement. With his 6-foot-10 frame, 7-foot-1 wingspan and bouncy yet tactful approach in the paint, the Naples, Fla. native gives Florida State a stretch forward who routinely racks up soul-shattering blocks above the rim.

Isaac's signature game this year saw him score 23 points on 7-of-9 shooting against Notre Dame on Jan. 18. He also posted a career-high seven blocks. an absurd number for someone Isaac's size. That included two in the final three seconds, as the Fighting Irish desperately tried to claw back in the final seconds.

Instead, they were met by Isaac's unrelenting flyswatters-for-hands. You can bet the youngster will make some overmatched foe look similarly silly this weekend.

Heck, maybe we'll get the chance to see that happen for a few more weekends. Crazier things have happened in March Madness.