Boy brings balloon to his twin's grave, sings to his brother on their 10th birthday 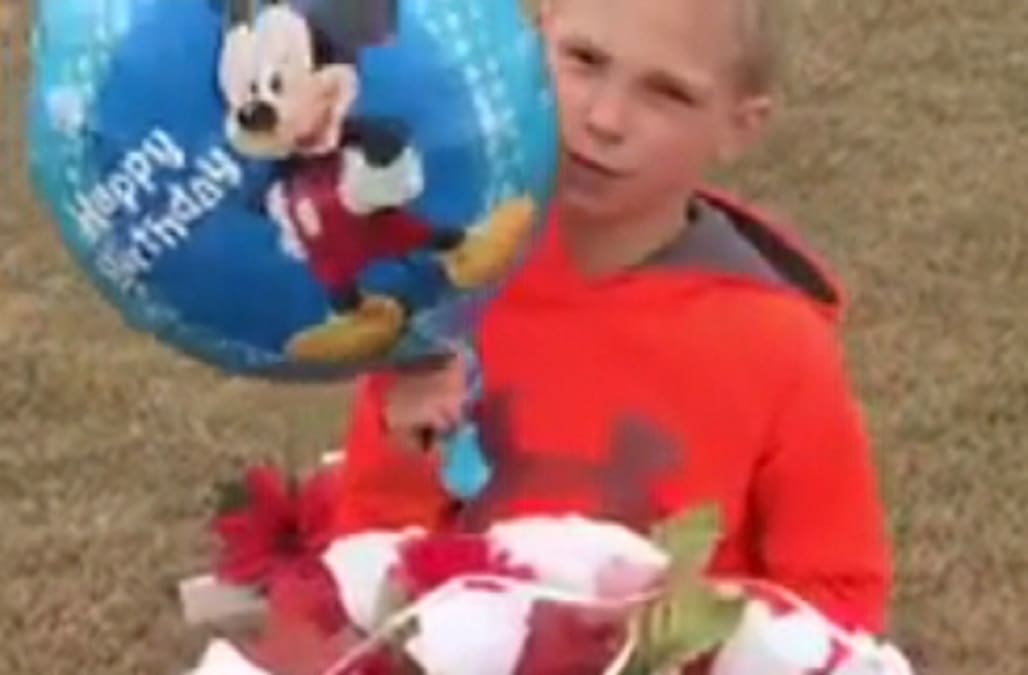 An Alabama boy opted to spend his 10th birthday with his twin by visiting the brother who should have been celebrating alongside him in the only place he could: His grave.

Walker Myrick rang in his milestone birthday by bringing a Mickey Mouse balloon to the final resting place of his brother Willis, his mother Brooke Myrick told InsideEdition.com.

She and Walker sang "happy birthday" at their loved one's headstone, which Walker embraced after saying, "Love you, Willis."

The pair had gone to see The Lego Batman Movie before visiting their late son and brother, she said.

"It was just me and him in the whole theater," Myrick told InsideEdition.com. "We laughed and just spent time together."

Boy talks to twin's grave in heart-wrenching photo
9-year-old Walker Myrick is a twin but his brother died during mom's pregnancy.
Walker and his mom visit his brother Willis at his grave for every holiday.
The two, even though they never met, still share a brotherly bond.
Willis died from a rare condition called Twin Transfusion Syndrome where both babies share a placenta.
Now every year their family participates in the 'Walker and Willis Birthday Walk' to help raise awareness about its complications.
Up Next

Much of the day was spent talking about Willis, who passed away in the womb from twin to twin transfusion syndrome (TTTS), a disease of the placenta that affects identical twin pregnancies.

"So many people know now about it," Myrick said of the tragic disease, which she has spoken out about. "We just hope babies across the world might be saved and it will all be worth it to our family."

Walker often visits his brother, and in 2012, he was photographed leaning against Willis' grave chatting about his first day of kindergarten.

"It gave me a sense of peace to see he picked up a connection with his brother," Myrick previously told InsideEdition.com of that day. "He feels like his brother watches over him. He's always felt that way."

Taking to social media to write her sons a letter on what should have been both their birthdays, Myrick wrote: "I promise Willis we will never exclude you or forget you... You are part of the family, and ten years later I know you have been missing but sometimes, even just for a second I almost forget. Because your name is [spoken] daily."

More from Inside Edition:
Uncles and Brothers Step In During 'Dad-Daughter Dance' for Bride Who Lost Her Father
Alligator Proudly Trots Across Golf Course With Massive Lunch Of Fish in Its Jaws
Sister Jumps Into Army Brother's Arms as He Surprises Her After 3 Years Deployed Overseas