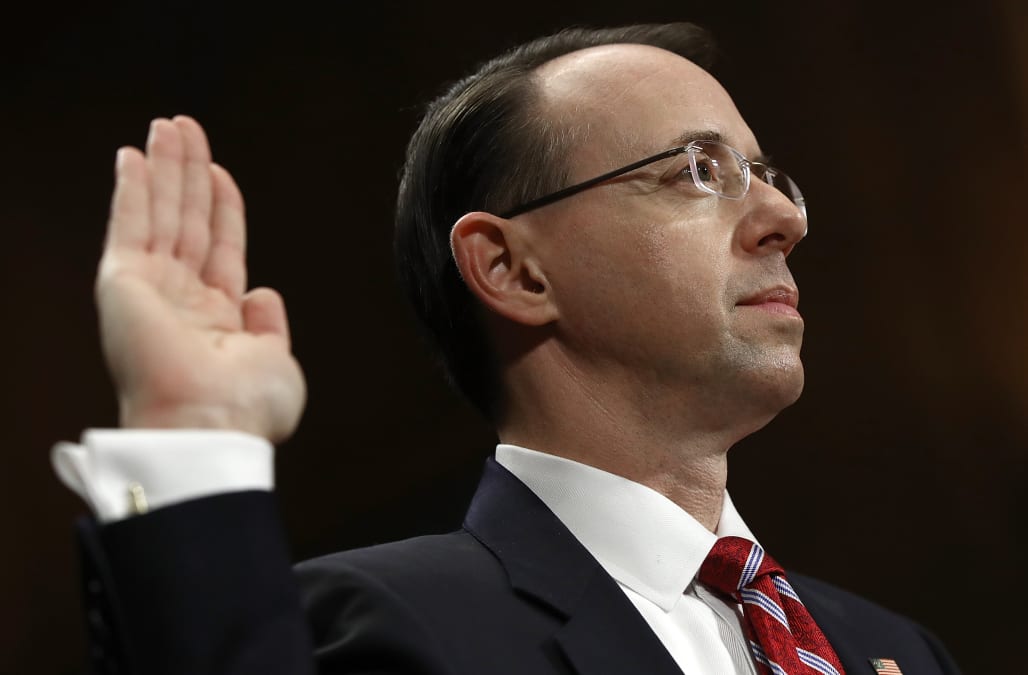 The Justice Department nominee who would oversee federal investigations involving Russia's meddling in the 2016 election refused Tuesday to commit to recusing himself and appointing a special prosecutor to lead such inquiries.

U.S. Attorney Rod Rosenstein, who was nominated by President Donald Trump to become deputy attorney general – the No. 2 spot at the Justice Department – testified at his confirmation hearing that he would "defend the integrity and independence" of the department.

But he said he lacked the information needed to determine whether an independent prosecutor was necessary.

"If I were confirmed, I would need to familiarize myself with the facts, I would need to consult with experts in the department," Rosenstein, the top federal prosecutor for Maryland, told the Senate Judiciary Committee. "I'm not aware of any requirement for me to recuse at this time. But as a lawyer I would need to know what I am recusing from."

Attorney General Jeff Sessions recused himself from any investigations related to last year's presidential campaigns under bipartisan pressure last week, after reports revealed that he had at least two previously undisclosed meetings with Russia's U.S. ambassador during the 2016 campaign. Sessions, a former GOP lawmaker from Alabama, was the first sitting senator to endorse Trump.

The developments spurred congressional Democrats' calls for an independent special counsel that would place distance between the Justice Department and the Trump team regarding a probe of Russian activities.

"It's vitally important that the American people have trust in this investigation and that there is not even the appearance of a conflict of interest or political influence," Sen. Dianne Feinstein of California, the Judiciary Committee's top Democrat, said in her opening remarks Tuesday. "I do not say this because I question the integrity or the ability of Mr. Rosenstein. I do not. But this is about more than just one individual. This is about the integrity of the process and the public's faith in our institutions of justice."

Congressional Republicans, meanwhile, have been more circumspect, though a chorus pushed for Sessions' recusal.

For example, Sen. Lindsey Graham of South Carolina – a senior Republican on the Judiciary Committee – allowed last week ahead of Sessions' announcement that a special prosecutor may be needed depending on whether the FBI finds evidence of illicit connections between the Trump campaign and Russian officials. But he stopped short of calling for one outright.

Rep. Darrell Issa of California, a member of the House Oversight and Government Reform Committee, went further, making headlines late last month when he told Bill Maher that a special prosecutor should investigate Russian interference in the election.

Rosenstein on Tuesday hinted that he may not choose to recuse himself. Former Attorney General Loretta Lynch, he pointed out, resisted calls in the final weeks of Obama's presidency in January to appoint a special counsel to investigate Russian interference.

"My understanding is that at least one of your colleagues called for a special counsel for something related to this matter while the attorney general was in office in early January, and she rejected the request," Rosenstein said in response to a question from Feinstein. "She said what I said, that she had confidence in the career professionals in the department."

He added that "if there was a need for a special counsel," Acting Deputy Attorney General Dana Boente, an Obama administration appointee, "has full authority to appoint one."

Rosenstein continued, "The answer is I'm simply not in a position to answer the question" about whether to appoint a special prosecutor.

"When I am in that position, I don't presume that Attorney General Lynch and Acting Deputy Attorney General Boente weren't correct," he said, noting that if he felt they did make a mistake, however, he would overrule them.

Rosenstein said that he has not had any communication with Sessions since the former senator became attorney general, and that the pair last spoke Nov. 28, when he received a call from Sessions.