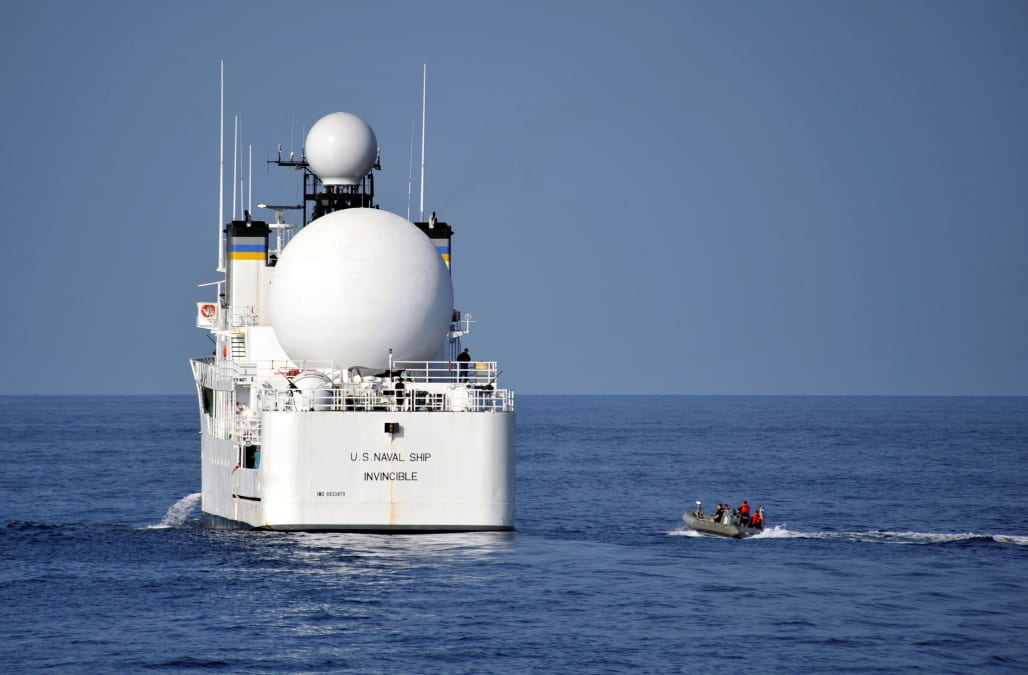 Multiple fast-attack vessels from the Iranian Revolutionary Guard Corps came close to a US Navy ship in the Strait of Hormuz on Saturday, forcing it to change direction, a US official told Reuters on Monday.

The official, speaking on the condition of anonymity, said the IRGCN boats came within 600 yards of the USNS Invincible, a tracking ship, and stopped.

The Invincible was being accompanied by three ships from British Royal Navy and forced the formation to change course.

RELATED: The US Navy through history

36 PHOTOS
The US Navy through history
See Gallery

The US Navy through history

In the decades after the Civil War, America began a new era of foreign intervention with the Navy leading the way. This 1899 photo shows sailors eating on the USS Olympia, which was the US's flagship during the Spanish-American War of the previous year.

The USS Holland, seen in this photo from 1900, was the Navy's first commissioned submarine.

President Theodore Roosevelt ordered a fleet of US ships to circumnavigate the globe from 1907-1909.

As the first World War raged in Europe, America rushed to build more and better ships, as seen in this 1917 photo ...

... and grew the ranks of sailors, as seen in this 1917 picture of graduation exercises at the Naval Academy.

The last of the US Navy's rigid airships, the USS Macon performed scouting missions from 1933 to 1935.

(Photo via US Naval Historical Center)

Since 1935, American ports have hosted "Fleet Week," a celebration of the sea services including sailors, Marines, and coast guardsmen. Here, sailors arrive in Manhattan in 1941.

Sailors at Pearl Harbor worked to salvage their ships and restore the base. This picture shows the recovery of a Japanese midget submarine abandoned during the Pearl Harbor attack.

Meanwhile, on the mainland, recruits signed up for the Navy and other armed services by the millions.

The US Navy led the war against the Japanese in the Pacific. This 1942 photo shows the torpedoed Japanese destroyer Yamakaze photographed through the periscope of USS Nautilus.

One of the most famous incidents in Navy history occurred at 2:30 am on August 2, 1943, when 25-year-old John F. Kennedy's patrol torpedo boat was hit by a Japanese destroyer. Two of Kennedy's men were killed in the crash.

The Navy also fought the Nazis, as seen in this 1944 photo showing the capture of a German U-Boat.

On August 14, 1945, Japan surrendered to the Allies, effectively ending World War II. The highly anticipated "Victory over Japan Day," gave way to some uninhibited celebrations — like this classic sailor's kiss in Times Square.

Only five years after WWII, America was fighting another war, this time in Korea. This 1950 photo shows the USS Missouri bombarding Korea's communist-held Northern coastline in order to cut enemy communications.

The Navy has planes too, about 3,700. This 1950 photo shows Boeing B-29 Superfortresses dropping 500 pound bombs on a chemical plant during the Korean War.

The US Navy's Douglas Skyraider was known for being able to take hits and keep flying. Here's a Skyraider deploying bombs in 1952 over Korea.

Beginning in 1964 and lasting for most of the next decade, the Vietnam War was the next major US conflict. This Navy jet fighter shoots Zuni rockets while flying over South Vietnam.

A crewman sits behind a machine gun while on patrol on the Go Cong River. Fighting in dense jungle against well-supplied Viet Cong left American troops frustrated with combat conditions. It was after this war that "Post Traumatic Stress Disorder" was officially identified.

The Navy played a major role during the Cuban Missile Crisis, enforcing a blockade to prevent Soviet weapons deliveries to Cuba. This 1962 photo shows a Navy seaplane and destroyer ship shadowing a Soviet submarine.

Operation Desert Storm, the US-led mission to liberate Kuwait from Iraq, deployed 14 destroyers and 2 battleships. In 1991, the battleship USS Missouri fires at Iraqi targets stationed along the Kuwaiti coast.

Here is one Navy pilot's stats marked on the side of his attack aircraft while deployed in support of Operation Desert Storm. They show combat missions flown, missiles launched, and bombs dropped.

In response to the terrorist attacks of September 11, 2001, the US entered into a "War On Terror" to eliminate al Qaeda. The Navy's amphibious assault ship, deployed in Operation Enduring Freedom in Afghanistan, is shown dropping off a 5-ton truck.

A Navy sailor working in an expeditionary command tests his night-vision goggles before setting off on another night patrol through Iraq’s waterways in 2007.

A Navy Seahawk helicopter returns to the USNS Mercy hospital ship after completing a humanitarian mission in the Pacific in 2008.

This F/A-18C Hornet is the nation's first strike-fighter jet and has a top speed of 1,190 miles per hour — and comes in at a cost of $39 million per plane. A typical Navy air wing has about 14 of these on hand.

The US Navy provides air, land, and sea support to the military. These divers search the sea floor during a salvage recovery exercise in 2010.

Navy SEALs leap from the ramp of an Air Force transport aircraft during parachute training over a Marine Corps base in Hawaii. Exercises like this show collaboration between military branches.

The US Navy submarine force consists of four vessel classes, all of which are nuclear-powered. In this 2004 photo, the crew of the USS Portsmouth enjoy the waters of the Pacific Ocean while deployed.

The USS Enterprise, or "Big E," is the world's first nuclear-powered aircraft carrier and has more steel construction than the Empire State Building. Though decommissioned in 2012, the Enterprise was once the Navy's largest vessel — with a 1960 price tag of $451 million.

The US Naval Academy Class of 2015 celebrates their graduation and commissioning ceremony. Many new officers will head to one of the 11 carrier strike groups the US has posted around the globe.

An AV-8B Harrier, from the 22nd Marine Expeditionary Unit, takes off from the flight deck of the amphibious assault ship USS Wasp on August 29, 2016.

The official said attempts were made to communicate over radio, but there was no response and the interaction was "unsafe and unprofessional."

Lawrence Brennan, a former US Navy captain and an expert on maritime law said the Invincible is a scientific research vessel and was unlikely armed except for "small arms for self defense."

Part of the Invincible's mission is to record sonar emissions from ships and record them, so as to devise countermeasures to disrupt adversary communication should a time of war arise.

The Invincible carries out a similar mission to the Russian spy ship that sat outside a US submarine base in Connecticut.

"This generic type of unarmed ship has been a target a number of times," said Brennan citing attacks on the USS Liberty and Pueblo as examples of similar harassment.

However, the Iranian navy and IRGC Navy have made a habit of harassing US ships near the Strait of Hormuz, and experts contacted by Business Insider believe that Iran provided Yemeni Houthi rebels the means to carry out a suicide boat attack on a Saudi Arabian navy vessel that killed two sailors.

This attack made the US Navy acutely aware of the danger from Iran's swarming ships, which the US Navy has had to resort to firing warning shots at before.

The US recently tested the efficacy of using A-10 Warthog guns and percision-guided munitions dropped from jets on Iranian fast-attack craft like the ones that harassed the Invincible on Saturday.

NOW WATCH: The US spends more on its military than the next 8 countries combined

SEE ALSO: US military test shows the A-10 'Warthog' can obliterate the small-boat swarms that Iran uses