Rubio: White House 'will have to answer' to Trump's wiretapping accusations 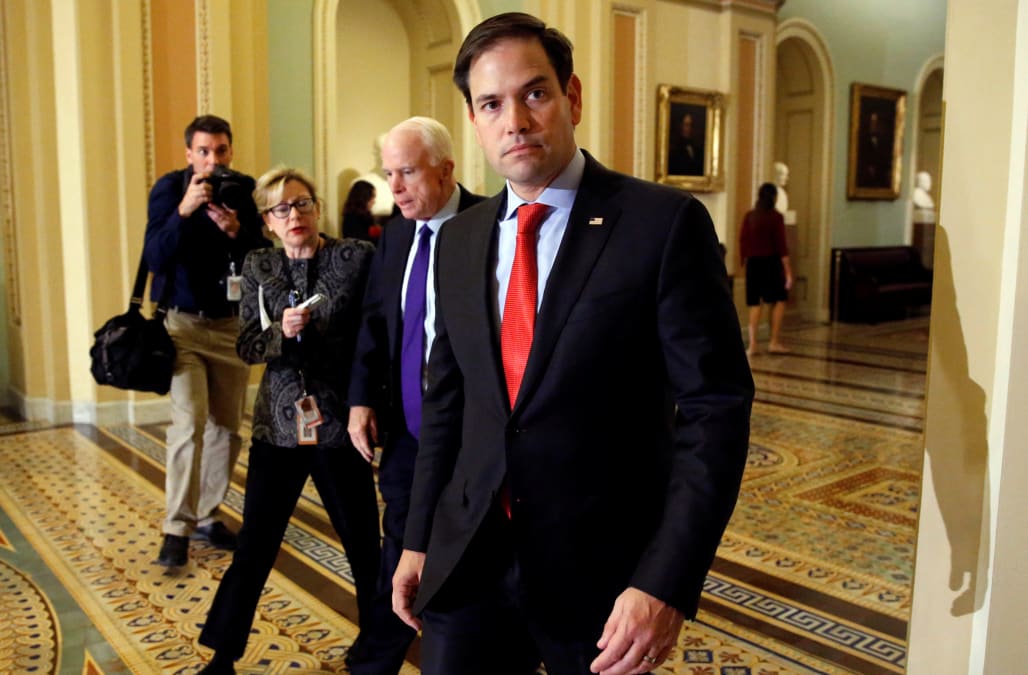 WASHINGTON — Florida Republican Sen. Marco Rubio flew down to Florida with President Donald Trump one day before the president sent a series of tweets claiming — without evidence — that former President Barack Obama wiretapped his phones at Trump Tower prior to the election.

Rubio told host Chuck Todd on Sunday's "Meet The Press" that he has "no insight" into what the president was referring to or what the motivation was for sending the tweets.

"Suffice it to say I don't have any basis, I've never heard that allegation made before by anybody," Rubio said. "I've never seen anything about that anywhere before. But again, the president put that out there, and now the White House will have to answer as to exactly what he was referring to."

Rubio's comments come on the heels of NBC News' reporting Saturday that a senior U.S. official in a position to know said he and others had no idea what the president was talking about regarding allegations that Obama ordered a wiretap of communications at Trump Tower.

Later on Sunday's "Meet The Press," former Director of National Intelligence James Clapper said that to his knowledge, there was no wiretap of Trump Tower.

U.S. President Barack Obama delivers a statement accompanied by Director of National Intelligence James Clapper (R) and Chairman of the Joint Chiefs of Staff General Joseph Dunford after a meeting with Obama's national security team at the Treasury Department in Washington, U.S., June 14, 2016.

Director of National Intelligence James Clapper (L) and United States Cyber Command and National Security Agency Director Admiral Michael Rogers prepare to testify before the Senate Armed Services Committee in the Dirksen Senate Office Building on Capitol Hill January 5, 2017 in Washington, DC. The intelligence chiefs testified to the committee about cyber threats to the United States and fielded questions about effects of Russian government hacking on the 2016 presidential election.

Director of National Intelligence James Clapper testifies about 'world wide cyber threats' during an open hearing of the House (Select) Intelligence Committee at the U.S. Capitol Visitors Center September 10, 2015 in Washington, DC. Clapper said that the budget uncertainty of sequestration has posed a challenge to how the United States faces cyber attacks from countries like China that could undermine U.S. economic competitiveness and national security.

James Clapper (L), Director of National Intelligence listens to testimony during a Senate Judiciary Committee hearing on Capitol Hill, October 2, 2013 in Washington, DC. The committee is hearing testimony on oversight of the foreign intelligence surveillance act.

Director of US National Intelligence James Clapper (L) and Homeland Security Director Janet Napolitano (R) share a few words before US President Barack Obama speaks in the Rose Garden at the White House in Washington on June 21, 2013 to announce his nomination of Jim Comey to be the next director of the Federal Bureau of Investigations (FBI). Comey, a deputy attorney general under George W. Bush, would replace Robert Mueller, who is stepping down from the agency he has led since the week before the September 11, 2001 attacks.

In this photo provided by The White House, (L-R) National Security Advisor Tom Donilon, Secretary of State Hillary Clinton and Director of National Intelligence James Clapper listen as Leon Panetta, Director of the CIA speaks during a meeting in the Situation Room on May 1, 2012 in Washington, DC. President Barack Obama's national security team held a series of meeting to discuss Osama bin Laden.

US Director for National Intelligence James Clapper (L) speaks with FBI Director Robert Mueller at the launch of the strategy to combat transnational organized crime at the White House in Washington on July 25, 2011. The United States Monday unveiled a series of sanctions aimed at cracking down on international organized crime, including gangs from Russia, Japan and Mexico and the Italian Mafia.

Director of National Intelligence James Clapper testifies during a hearing before the Senate (Select) Intelligence Committee February 16, 2011 on Capitol Hill in Washington, DC. The hearing was to discuss the U.S. intelligence community's assessment of threats to national security.

Federal Bureau of Investigation Director Robert Mueller, Office of National Intelligence Director James Clapper, Centeral Intelligence Agency Director Leon Panetta testify before the the House (Select) Committee on Intelligence at the U.S. Capitol February 10, 2011 in Washington, DC. While testifying to the committee, Panetta confirmed that he had intelligence that Egyptian President Hosni Mubarak may be stepping down today. The U.S. intelligence leaders testified to the committee in an open hearing about 'world wide threats' before moving into a closed briefing.

US President Barack Obama stands alongside retired General James Clapper, Obama's nominee for director of national intelligence, in the Rose Garden of the White House in Washington, DC, June 5, 2010.

The Senate Select Intelligence Committee holds a confirmation hearing to hear the testimony of nominee James Clapper to fill the vacancy of director of National Intelligence (DNI), on Capitol Hill Tuesday July 20, 2010.

Rubio, a member of the Select Committee on Intelligence, said that he remains confident in the committee's ability to conduct a fair inquiry into Russia's activities to influence the last election and that a special prosecutor isn't yet necessary.

"Not now," Rubio said. "I certainly don't think we are at that point at this moment."

The senator added that he "would be the first person to tell you" and not sign his name if he did not have strong faith in the Senate committee's report.

"No one is there looking for a political angle," he said, declaring that members understand that "the credibility of the committee is on the line."

Responding to a question about whether Trump's use of the word "witch hunt" to describe questions about his administration's ties to Russia is fair, Rubio told Chuck Todd that the president has every right to defend himself.

"He obviously feels very strongly that he's being accused of things that he hasn't done and that there's hysteria out there in the media," Rubio said. "He has a right to express himself, just as people are out there basically saying that he won his election simply because of the Russians."