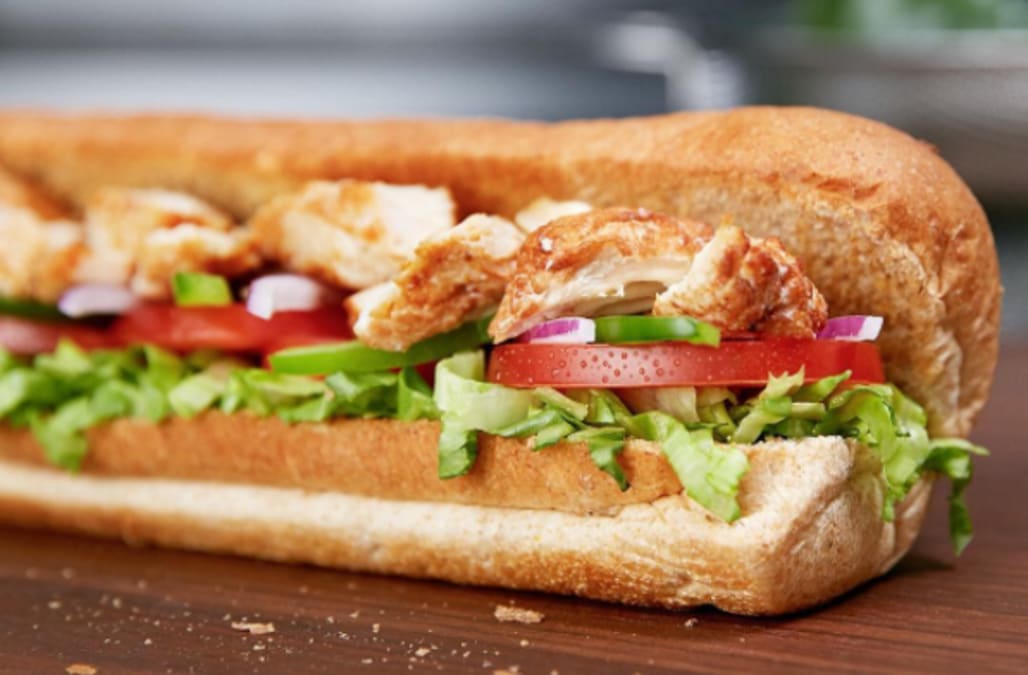 An unsettling study led by the Canadian Broadcasting Corporation (CBC) uncovered information about fast-food chicken that consumers may find hard to swallow.

The CBC teamed up with researchers at Trent University's Wildlife Forensic DNA Laboratory to test the chicken at five major fast-food restaurants -- and the results were harrowing.

Luckily for fast-food lovers, a majority of the meat came back between 85 and 90 percent chicken DNA -- except for Subway's.

Subway's results were apparently such an outlier that the team tested them again, "biopsying five new oven roasted chicken pieces, and five new orders of chicken strips" only to come up with similar results.

DNA testing reveals it's soy -- a common additive in the fast-food industry, according to Ben Bohrer, a food scientist at the University of Guelph.

In a process called "restructuring," smaller pieces of meat are bound together with other ingredients to make them last longer, taste better and, as Bohrer puts it, "add value" -- i.e. help the restaurant make more money off less quality meat.

While this process may have a plethora of benefits to be reaped by the restaurant industry, the negatives fall entirely on consumers.

According to the CBC, fast food chicken with fillers (like soy) have about a quarter less protein than consumers would get in a home-cooked equivalent.

Also notable are the higher sodium levels of "restructured" meat, which the CBC found to be between seven and 10 times what they would be in a piece of unadulterated chicken.

Subway Canada released a statement saying they "cannot confirm the veracity of the results of the lab testing," and claiming "all of our chicken items are made from 100% white meat chicken which is marinated, oven roasted and grilled."

"However, we are concerned by the alleged findings you cite with respect to the proportion of soy content," Subway continued. "Our chicken strips and oven roasted chicken contain 1% or less of soy protein. We use this ingredient in these products as a means to help stabilize the texture and moisture."

In the mean time, if you're looking for an alternative lunch spot, Wendy's grilled chicken sandwich had nearly 90 percent chicken DNA.

Or maybe just fire up your oven and make some at home.

A Subway representative reached out to AOL.com to provide the following statement, including information on two additional testings that have discredited the aforementioned CBC study:

Test results from laboratories in Canada and the U.S. clearly show that the Canadian chicken products tested had only trace amounts of soy, contradicting the accusations made during the broadcast of CBC Marketplace.

Subway representatives immediately contacted the program and the lab that conducted the tests to inquire about the methodology and the testing process. The program and the lab declined to engage with Subway except to share the results. In response, Subway sent samples of the Canadian products that Marketplace claimed contained 50% soy protein to Maxxam Analytics in Canada and Elisa Technologies, Inc., in Florida.

The results from both labs found soy protein below 10 ppm, or less than 1%, in all tested samples. These findings are consistent with the low levels of soy protein that we add with the spices and marinade to help keep the products moist and flavorful.

"The stunningly flawed test by Marketplace is a tremendous disservice to our customers. The safety, quality and integrity of our food is the foundation of our business. That's why we took extra caution to test and retest the chicken. Our customers can have confidence in our food. The allegation that our chicken is only 50% chicken is 100% wrong," said SUBWAY President and CEO Suzanne Greco.

Dave Theno, Subway's Chief of Food Safety & Quality, said, " Our chicken is 100% white meat with seasonings, marinated, cooked and delivered to our restaurants. The chicken has no artificial colors, flavors or preservatives. Through years of testing, we've never seen results like the program claimed."

Subway has shared the results of the independent tests with Marketplace and the lab that conducted the flawed test. The company is demanding a retraction and apology.

Here are some chicken recipes to get you started:

"Hawaiian Shoyu Chicken is marinated in a soy, brown sugar marinade with a little bit of spice from the cayenne pepper.  It’s easy to whip up the marinade in the morning, head off to work and saute the chicken in under 30 minutes when you get home. {gluten free}" - Seasonal Cravings

"While these skewers are really good on their own, with some rice and grilled veggies, I could easily see the meat removed and piled high on a sandwich with Asian sub fixins like cucumber, carrot, and cilantro with a little extra of the sauce on top." - Wit and Vinegar

"This recipe basically calls upon the lord of all things moist, buttermilk, to produce fried chicken that is juicy as all get out." - Probably This

"After three months of crunching on salads I’m yearning for the tenderly cooked vegetables and poached chicken in the perfect bowl of soup." - Hola Jalapeno

"A hearty and comforting Brazilian Paprika Chicken Stew is possibly one of the best ways to warm up this fall/winter. It is also very easy to make and done in one pot!" - Olivia's Cuisine

"Tequila Honey Lime Chicken – juicy chicken marinated in a smoky chipotle, a touch of honey and chili powder then finished with a super quick and fresh red pepper salsa!" - With Salt and Wit

"I love how quick it comes together and it really tastes like a giant hug! There's something so comforting about stews, right? And this chicken stew is my jam." - Fix Feast Flair

"It is so incredibly easy to make – just toss everything into an ovenproof dish and throw it in the oven." - The Wanderlust Kitchen

"Jon’s secret is to broil both sides of the meat until charred. He swears it keeps the meat from becoming soggy & after trying just one bite, we knew it was how we’d be cooking meat from here on out!" - Public Lives Secret Recipes

"Most of these ingredients are already in your cupboard. If not, get them. You’ll be able to throw stir fry and fried rice together like a boss. Let’s do this." - Displaced Housewife

"This easy, flavorful pasta dish is a favorite of ours for a quick weeknight meal. It features tender strips of boneless chicken tossed with spaghetti, sweet tomatoes and a simple, light sauce flavored with garlic, onion and fresh lemon." - My Gourmet Connection

"Add cilantro, sliced tomato and about a teaspoon of Chipotle mayo to each tortilla. Add a squeeze of lime juice onto each taco." - Nutrition by Mia

"I love this soup for oh so many reasons. First of all, it's insanely easy to make. The ingredients are simple and easy to find and it's insanely comforting." - Fix Feast Flair

"Lighter pan-fried chicken breast with cherry and arugula salad is the perfect weeknight meal that is light, nutritious, and delicious!" - Cooking and Beer

"These Thai inspired quesadillas have a super quick but unbelievably addicting peanut sauce that gets tossed with the chicken and then drizzled all over the top." - The Whole Bite

"A whole roasted chicken is always going to be a seriously low faff, delicious meal to feed a whole bunch of people- and it's usually far cheaper than buying prepared chicken breasts." - Holly Likes to Cook

"The curry is infused with delicious coconut milk and a blend of aromatic spices. I've tried to make it simple by skipping out several steps where the spices need to be fried with the onions and removed the oil completely." - A Brown Table

"When I first made this chicken pot pie recipe, it almost didn’t make it to the point of getting topped with the puff pastry.  The filling was THAT good, I keep tasting spoonful after spoonful, so I knew it was only a matter of time before it just became chicken pot pie soup." - A Happy Food Dance

"I’ve lived as second fiddle to the other chicken soup my whole life. Heck, I know the other soup is special – there is an entire book series named after it." - Simply Sated

"I’ve made a variety of sweet potato noodle recipes recently—usually while listening to the Hamilton soundtrack (I was also late to that party)—but this Spicy Chicken and Sweet Potato Noodle Bowl remains my favorite." - Domesticate Me

"This recipe for Bourbon Chicken is much more flavorful than any food court offering, plus the spice level can be easily adjusted to suit your tastes, you can use better quality chicken, and it is quick and easy to make at home." - Kitchen Joy

"It has powerful healing properties that can help to boost your immune system, alleviate joint pain, brighten skin and go as far as making your hair shiny and bright." - Kitchen Living with Coryanne

"Napa Valley Chicken is baked in a sweet and savory tomato, onion, and garlic sauce and is one of my absolute favorite recipes from my childhood." - Garnish and Glaze

"Hawaiian Chicken Kebabs can either be a simple weeknight supper or the hit of a barbecue!" - Souffle Bombay

"It is no surprise that I love using crescent rolls for dinner.  I used them in my super popular Chicken Ranch Club Roll Ups And my new favorite Cheesesteak Crescents, which are to die for!! Seriously a dinner I turn to ALLL the time!" - Life With The Crust Cut Off