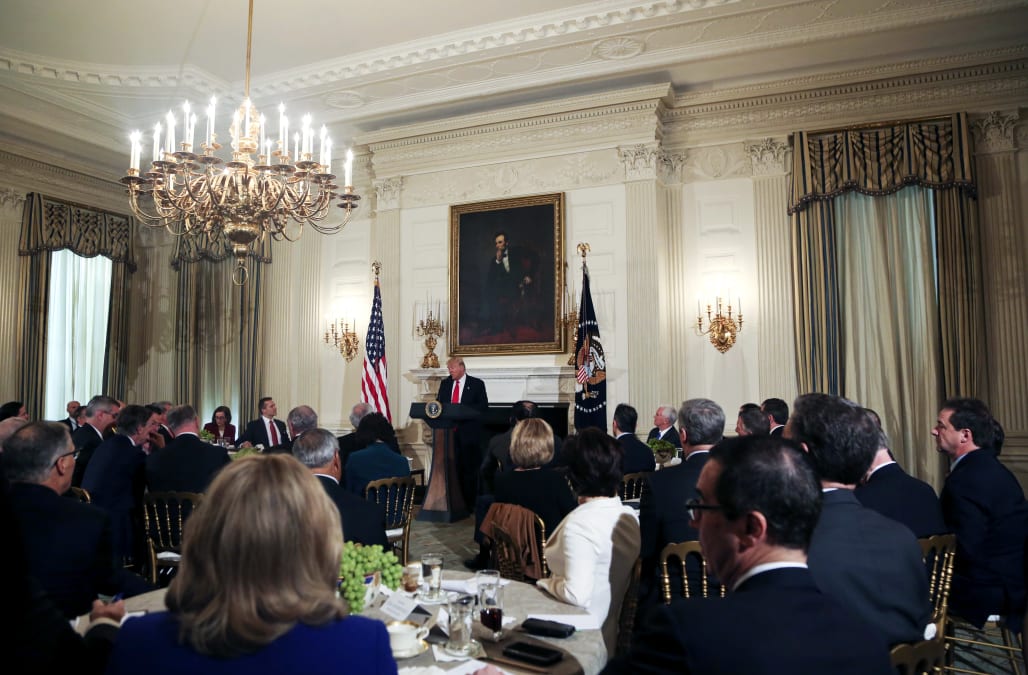 As pressure mounts on the Trump administration and congressional GOP leaders to come up with a replacement for Obamacare that won't lead to huge losses in health care coverage for Americans, a new study presented at the National Governors Association over the weekend suggests that millions would be hurt under an emerging House GOP plan.

The analysis prepared by the health research firm Avalere Health and the consulting firm McKinsey and Company doesn't offer nationwide projections for declines in coverage if the House Republican plan were approved by Congress as a replacement for the Affordable Care Act. However, the analysis -- first reported Saturday by VOX -- indicates that there could be reductions of 30 percent to 50 percent in the number of individual market enrollees based on hypothetical state models. As it stands, the average retention rate of Obamacare insurance is 76-80 percent or a 16- 20 percent drop annually from signup to paying for premiums.

Still, if those projections are extrapolated nationwide, it suggests that many of the 7.7 million people who obtained health coverage through the exchanges would no longer be able to afford it.

Preventative health care costs under Trump
Up Next

President Trump last month boasted that the GOP replacement plan would provide health care coverage for "everybody," but he and his senior advisers subsequently backed away from that. Republicans now say that their approach would provide "universal access" to affordable health care, but without guaranteeing that everyone currently enrolled can hang on to their insurance.

The White House on Sunday refused to say whether Trump would guarantee that the 7.7 million of Americans currently enrolled in Obamacare would continue to have coverage under a Republican substitute plan. During an appearance on the ABC News show This Week, Deputy White House press secretary Sarah Huckabee Sanders said, "the goal is that we make sure that people don't lose their coverage and we have to put a high priority on the people who need it most."

"But at the same time, we cannot survive under the current system," she added. "We have to make a massive overhaul to the health care system in America . . . Nobody would argue that we're on a path that we can maintain."

Related:A First for Obamacare: Majority of Americans Now Support It

The House plan drafted by Speaker Paul Ryan (R-WI) and other GOP leaders may be formally introduced as early as Monday when Congress returns from a week-long recess. The past week has been marked by angry protests at town hall meetings and marches in Washington, D.C., and other cities involving Democrats and some Republicans who are fearful of losing their health insurance coverage.

If Trump and GOP leaders have their way, Congress will vote in the coming weeks to repeal key elements of the Affordable Care Act, including income-based tax subsidies for mostly low and moderate income people to help cover their premium costs and expanded Medicaid coverage in 31 states and the District of Columbia.


In place of Obamacare, the House plan would offer a series of free-market based measures, including age-adjusted tax credits that would benefit older, wealthier people far more than younger, poorer Americans. The Republicans would also gradually replace Medicaid with a program of block grants or per capita payments to the states that would save the federal government billions in the coming years but reduce coverage for lower-income people.

The consultants' report to the governors outlines what would happen under the GOP approach in a hypothetical state that has 300,000 people enrolled in the individual health care market and expanded Medicaid for the poor. Enrollment in the individual market would decline by 30 percent, resulting in 90,000 people losing their coverage. According to the report, the loss of coverage would be far worse in states that refused to expand their Medicaid programs under the ACA. Many of those states are run by Republican governors or GOP-dominated state legislatures. The report presents a hypothetical model of a state with 235,000 currently enrolled in the individual market. It estimates that coverage would decline by 120,000 people or about 50 percent.