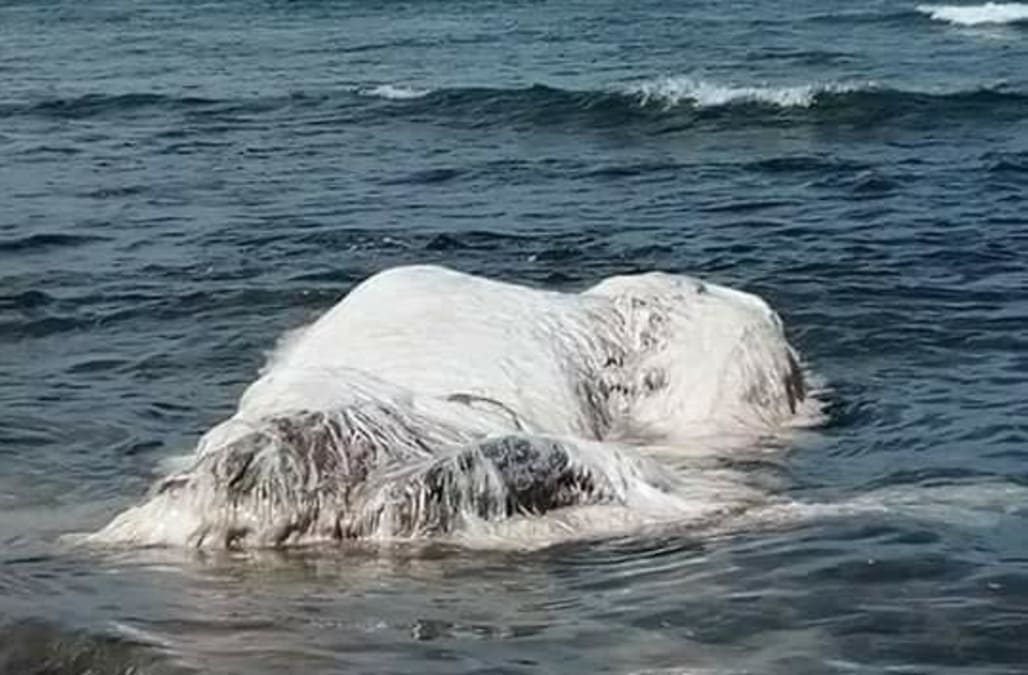 Scientists and locals are baffled after a "hairy" sea creature measuring in at almost 20 feet long washed up on a shore in the Philippines this week.

Similar unidentified carcasses have been discovered on beaches in the region for years -- but it's still not entirely clear sea creature they might be.

Some locals speculate that the sea animal, known by some as a "globster," is a new species scientists have not yet discovered, but experts remain unconvinced of the "new" finding.

The head of science and conservation for the animal charity Orca, Lucy Babey, says she's certain the blob is the carcass of a large dead animal.

See photos of the 'globster'

"It's definitely a very decomposed sea creature in the later stages of decomposition," Babey tells Newsbeat.

"The carcass is about six meters long, but that's obviously not the whole carcass - there's no tail so it would have been bigger than that," Babey says. "That would suggest that it was probably a whale."

"They have numerous whale species in the Philippines such as the blue whale, fin whales and humpback whales as well as smaller whales such as minke whales."

SEE ALSO: Divers bump into a creature so big it could inhale a human being

But Babey says there is a possibility that the carcass was once a manatee.

"Unfortunately with this animal it is far too decomposed to be able to get a confident identification on what animal it was," she says.

But people are still curious as to why the creature is "hairy."

RELATED: 10 Weird Fish You Should Eat to Protect the Earth

10 Weird Fish You Should Eat to Protect the Earth
Also known as sablefish, Alaska cod, butterfish, gindara, or sable, black cod is a light, soft-textured fish that is similar to Chilean sea bass. It primarily comes from the Pacific Northwest, where it is very carefully, responsibly farmed.
Catfish is a great example of how where a fish comes from can make a big difference in its environmental impact. Seafood Watch promotes the consumption of U.S. farm-raised catfish for its vegetarian diet, sustainability, and the fact that farm-raised fish reduce the demand for wild-caught catfish.

Speaking as someone who has wild-caught more than a few croakers, there's something alarming about these fish: Simply put, it's a little weird to hear a fish making frog sounds when you pull it out of the ocean. But there's nothing weird about their flavor: mild and delicious, they can be cooked with minimal seasoning. And, given that they're on Seafood Watch's "best choice" list, they're also a definite guilt-free choice.

Known by a wide variety of names, yellow perch is a freshwater lake fish that is commonly found in the U.S. and Canada. Once heavily overfished, it has rebounded in the U.S., especially Lake Erie, where Seafood Watch lists it among their best choices.
Remember those pictures with the big-eyed kids that were so popular in the seventies? Well, if they ever made you hungry, this is the fish for you. The big-eyed scad has a huge, sad gaze vaguely reminiscent of owls, Dobby from "Harry Potter," or Mitch McConnell. If you can get past that, however, it makes a delicious, sustainable entree.
If you like smoked salmon, a great alternative is smoked whitefish. Native to the Great Lakes, it's a delicious, mild fish that tastes great when made into a salad. Personally, I like to substitute it in this smoked trout recipe, which uses celery, dill and walnuts.
By now, tilapia no longer officially counts as a "weird" fish: It has been widely available and popular for years, and it is already a well-known choice for those seeking to eat sustainably. But, well-known or otherwise, it's still ranked as one of Seafood Watch's favorite choices. And with a mild, light flavor, it's a great choice for dishes that use a strong marinade or sauce.
Up Next

Babey explains that the perceived hairs on the carcass are likely to be muscle fibers, as the animal's body is in the later stages of decomposition.

"Other creatures could have sped up the decomposition process, but it looks like a normally decomposing carcass," she says.

More from AOL.com:
China finishing South China Sea buildings that could house missiles: US officials
Delta is bringing back a free perk that it got rid of years ago
Wellness Wednesday: Mini green egg (no ham) frittata bites