Where to go in the US to see a giant pandas 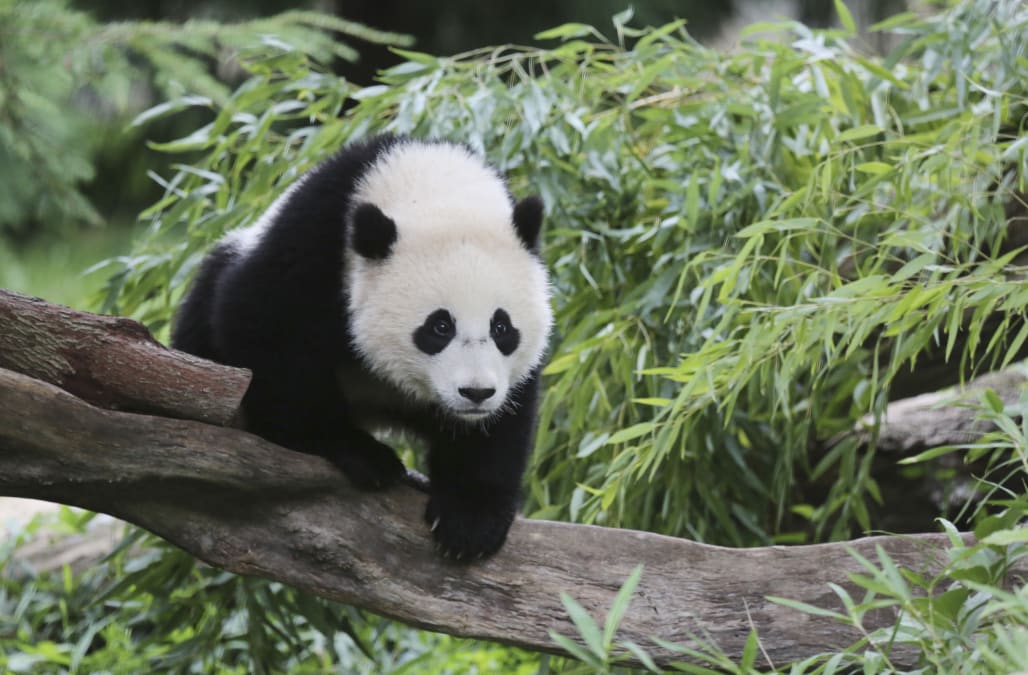 Giant panda Bao Bao's new home is in Chengdu, China. But there are 12 other giant pandas in the U.S. you can still visit.

There are three pandas at the San Diego Zoo. Bai Yun and Gao Gao are successful panda parents: Xiao Liwu is their fifth cub.

SEE MORE: The Panda Population Is Perking Up, But It Still Has A Long Way To Go

Memphis Zoo in Tennessee has two pandas, Ya Ya and Le Le. Keepers have been trying to help them have a cub for more than a decade now.

And in Washington, D.C., the Smithsonian National Zoo is still home to three pandas: Mei Xiang, Tian Tian and their cub Bei Bei, who was born in 2015. When he is 4 years old, he will follow his sister Bao Bao to China.

A zoo employee holds three-month-old female giant panda cub, born to mother Liang Liang and father Xing Xing, on display to the public for the first time at the national zoo in Kuala Lumpur, Malaysia, November 17, 2015.

A baby panda plays in a enclosure at the Giant Panda Research Base in Chengdu, southwest China's Sichuan province on June 24, 2012, as thousands of visitors gather for the Duanwu festival or better known as the Dragon Boat festival. China engages in 'panda diplomacy', using the endangered but iconic bears as diplomatic gifts to other countries, and also runs a lucrative trade hiring the animals out to foreign zoos, as only around 1,600 remain in the wild in China, with some 300 others in captivity.

This picture taken on September 23, 2013 shows new-born panda cubs displayed on a crib during a press conference at the Chengdu Research Base of Giant Panda Breeding in Chengdu, southwest China's Sichuan province. 14 giant panda cubs born in 2013 were presented to the public at the press conference, during which the research base introduced the global breeding situation of giant pandas this year.

EDINBURGH, SCOTLAND - APRIL 10: Yang Guang, the male Panda at Edinburgh Zoo, eats bamboo inside his enclosure on April 10, 2013 in Glasgow, Scotland. Zoo experts can now say that the giant pandas Tian Tian and Yang Guang are likely to meet for the breeding season imminently. The Royal Zoological Society of Scotland has announced that scientific testing has identified that female panda Tian Tian could possibly now be as little as 10 days away from her 36 hour fertile window.

A Panda Bear in the Olympic Games Panda Bear enclosure at the Beijing Zoo on May 22, 2012. The zoo grounds were originally a Ming Dynasty imperial palace and finally opened to the public in 1908. The zoo's history states that during the WWII, most of the zoo's animals died of starvation with only 13 monkeys and one old emu surviving the war.

Giant panda Juxiao plays with her cub, one of the panda triplets at Chimelong Safari Park on December 9, 2014 in Foshan, China. The world's only live giant panda triplets (two boys and one girl) started living together with their mother, giant panda Juxiao, after taking turns living with her since their birth at the Chimelong Safari Park on Tuesday. The triplets were born on July 29 and after over 100 days they now all weigh over 8 kg and are doing well. They will stay with their mother and meet with visitors at 13:00 - 15:00 and 16:00 - 18:00 from Tuesday.

This picture taken on July 17, 2014 shows giant panda Ai Hin holding a bamboo twig at the Chengdu Giant Panda Breeding Research Centre in Chengdu, in southwest China's Sichuan province. Hopes that tiny panda paws would be seen in the world's first live-broadcast cub delivery were dashed on August 26, 2014 when Chinese experts suggested the 'mother' may have been focusing more on extra bun rations than giving birth.

A worker shows of one of the baby pandas at the Giant Panda Research Base in Chengdu, southwest China's Sichuan province on June 24, 2012, to attract visitors for the Duanwu festival or better known as the Dragon Boat festival. China engages in 'panda diplomacy', using the endangered but iconic bears as diplomatic gifts to other countries, and also runs a lucrative trade hiring the animals out to foreign zoos, as only around 1,600 remain in the wild in China, with some 300 others in captivity.

A feeder moves a giant panda cub in an enclosure as the panda triplets make their debut appearances to the public to celebrate their 100th days after birth, at Chimelong Safari Park in Guangzhou, Guangdong province November 5, 2014. The triplets was given birth by giant panda Juxiao (not pictured) at the park in July. The birth is seen as a miracle due to the low reproduction rate of giant pandas.

Giant Panda cub Fu Bao, meaning lucky leopard, sits on a tree stump in its enclosure at the zoo in Vienna January 10, 2014. It is the Panda's second public appearance outside of its tree cave since it's birth on August 14, 2013.

Two-year-old giant female panda Bao Bao licks honey off of a plastic crate after a press conference to announce the gender and paternity of the giant panda cub twins recently born to female panda Mei Xiang, at the zoo in Washington, D.C., Friday, August 28, 2015. Both the surviving and deceased twins are male and the father is Tian Tian, sharing parents with Bao Bao.

(Photo by Allison Shelley/For The Washington Post via Getty Images)

Bing Xing, father of Chulina, a female panda baby, that was born last August, eats bamboo side its enclosure at a zoo in Madrid, Spain, January 12, 2017.

A giant panda 'Bing Xing', who is father of female panda 'Chulina', which was born last August in Madrid, is seen at the zoo in Madrid, Spain on January 12, 2017.

Baby panda Fu Wa, its same name with Beijing Olympics' mascot, attends a ceremony at China Conservation and Research Centre for the Giant Panda in Wolong, in China's south western province of Sichuan, 10 February 2007. The ceremony marks the occasion of the 18 panda cubs which were all born in 2006 and been weaned and step into the garden of a nursery.

'Kai Kai', a male panda from China, walks around its enclosure during a media preview at the River Safari on October 29, 2012. Two giant pandas, aged four and five-years old and on loan from China for 10 years to the Wildlife Reserve Singapore (WRS) - the parent company to the city's Jurong Bird Park, Night Safari and Singapore Zoo, are being housed in a custom-built 16,145 square foot enclosure costing 6.9 million USD within WRS's newest attraction, the River Safari, will open to the public for a special preview on November 29.

Giant Panda, Kai Kai is seen in the Giant Panda enclosure during a media tour ahead of the opening of River Safari at the Singapore Zoo on March 25, 2013 in Singapore. The River Safari is Wildlife Reserves Singapore's latest attraction. Set over 12 hectares, the park is Asia's first and only river-themed wildlife park and will showcase wildlife from eight iconic river systems of the world, including the Mekong River, Amazon River, the Congo River through to the Ganges and the Mississippi. The attraction is home to 150 plant species and over 300 animal species including 42 endangered species. River Safari will open to the public on April 3.

A 5 1/2-month-old male panda named Xiao Liwu has its head measured during its weekly checkup at the San Diego Zoo on January 15, 2013. The 14-lb animal is still nursing and just learning to munch on a slice of apple. The healthy panda was born here at the zoo and along with it's mother has been on display for a limited number of hours since last week.

Giant Panda Mei Xiang guards her fruit-filled bucket of ice at Washington's National Zoo where she and mate Tian Tian were having a birthday party. Mei Xiang was born July 22, 1998 and Tian Tian was born Aug. 27, 1997. But sharing a party seemed the diplomatic thing to do in the nation's capital.