President of Iceland wants to ban pineapple on pizza 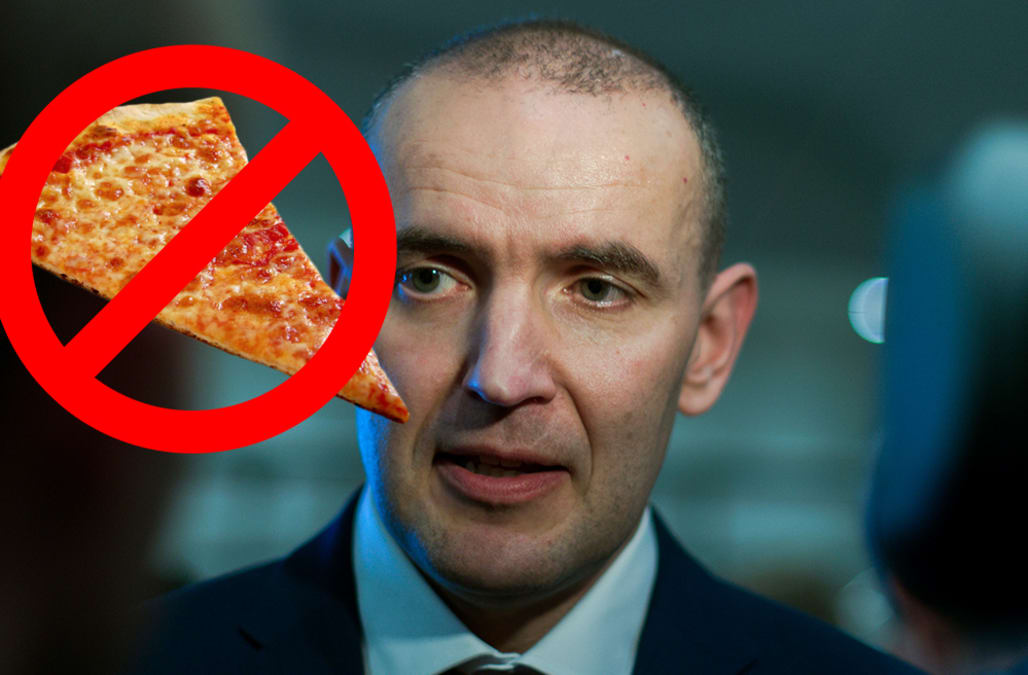 Have you ever hated something so much, you wanted it banned from your entire country? Guðni Th. Jóhannesson, the president of Iceland, knows how you feel -- but he would actually make it happen.

While visiting a high school in the town of Akureyri, in Northern Iceland, Jóhannesson expressed his views on a pretty controversial topping: pineapple on pizza. He is so against the topping, in fact, that he would ban it from the entire country.

What are some cheap pizzas?

20 PHOTOS
The 20 best pizzas for under $10 (GOBankingRates.com)
See Gallery

The 20 best pizzas for under $10 (GOBankingRates.com)

Pizza Hut has one of the best pizza deals, because it offers variety with its special dinner box. Every day of the week, you can get a medium pizza with one topping, five breadsticks and 10 cinnamon sticks for only $10.

Fortunately for you, coupon sites frequently have deals on the best cheap pizza chains, including Pizza Hut. If you use the promo code TEOMED3T6 via RetailMeNot.com, you can score a medium pizza with three toppings for just $6.

It's tough to beat the pizza deal that Domino's Pizza is currently running. Monday through Thursday, you can buy a large pizza with three toppings for $7.99 when you use coupon code 9174 at RetailMeNot. The only catch is that the deal is carry-out only.

You'll have to do a little math, but you can get a Papa John's pizza for under $10. Now through Dec. 31, 2017, you can take 25 percent off the price of your online order when you use promo code 25OFF through RetailMeNot. In order to stay under $10, however, you'll have to order a medium cheese pizza, which normally costs $13.

Cicis offers one of the best cheap pizza deals out there. At participating locations, you can buy two large, one-topping pizzas for just $10, through RetailMeNot.

Cheap pizza is great, but a cheap pizza combo is even better. At Little Caesars, you can get a Hot-N-Ready Lunch Combo for just $5, which includes four slices of deep dish pizza and a 20-ounce drink. Just be sure to get the pizza between 11 a.m. and 2 p.m. to get the deal.

If you're looking for great pizza on a budget, look no further than Blaze Pizza. You can get a Build Your Own Pizza for $8.45, which includes your choice of toppings.

You’ll have to use a little finesse to score the best cheap pizza deal at Donatos. Using the promo code 069-200 on RetailMeNot, you can take $2 off any medium pizza, which brings a medium pepperoni pizza down to just $9.99 from the usual $11.99.

Photo credit: Courtesy of GOBankingRates.com / Photo by Yelper Katelyn A.

If you're looking for quality, Chicago-style pizza, then Uno Pizzeria & Grill could be the best pizza for you. The Northside Cheese Chicago Thin Crust serves up mozzarella, aged cheddar, romano and tomato sauce all for just $9.99.

With locations throughout the Southeastern U.S., Gatti's Pizza has some solid deals on pizza. You can get a Build Your Own Pizza, with your choice of one topping, for just $3.49 when you order an individual, or pay just $9.99 for a medium pizza.

Not to be confused with Papa John’s, Papa Gino’s offers great pizza on a budget but is limited to the New England area. Despite the geographic restriction, Papa Gino’s still serves up one of the best cheap pizza deals.

By using the promo code 6077, you can save serious money on a great meal. Instead of paying $11.99, you’ll pay only $8 for a large cheese pizza when you use that coupon code to order a pizza, small boneless wings and cinnamon swirl pizza. The total for it all: $16.

You can get a large triple cheese or pepperoni pizza for $5.55, available around the clock, at 7-Eleven. You can download the coupon at Coupon Cabin. The deal expires July 31.

Godfather's pizza frequently has deals on pizzas. The best pizza deal you’ll find for under $10 is the mini pizza and side dish combo. When you use coupon code VALUE5, it’ll only cost you $6.99 for a Mini Specialty Pizza, with up to four toppings, and one side order.

A small pizza at Marco’s Pizza is 10 inches, which is pretty good considering it costs only $7.99. But you can make that deal even sweeter by using coupon code HD2939 from RetailMeNot. With that, you can get a small, one-topping pizza and 20-ounce drink for a mere $6.

Round Table is the 11th largest pizza chain in the U.S. Although family-size pizzas are over $10, Round Table packs a lot of value into its personal pizzas. For $8.49, you can snag the King Arthur’s Supreme: a personal pizza loaded with pepperoni, salami, mushrooms, peppers, onions, black olives, linguica and Italian sausage.

Instead of paying the usual $9.99, you can grab a hand-tossed, medium round pizza with cheese and one topping for just $7.49. Besides this deal, if you sign up for Jet's E-Club, you can get offers for great pizza on a budget.

Even without a special or discount, Hungry Howie’s offers great pizza on a budget with a large pizza going for $9. If you want to get an even better value, though, use the coupon code 6101 to get a large, three-topping pizza for $7.99.

Old Chicago Pizza & Taproom offers more than pizza. There are craft burgers, booze and even salads in addition to the quality pizza options. For $8.99, you can snatch up an individual-size Chicago Thick crust pizza for lunch.

You can get a large Papa Murphy's FAVES pizza for $5 — cheese, pepperoni or sausage. Bring the coupon, which can be found on RetailMeNot, to the store, printed or on your phone. Note that it's a "take n' bake" pizza, so don't forget to preheat your oven.

Located Southwest U.S., Peter Piper Pizza offers a great pizza on a budget, especially if you go small. You can get a personal 5 Meat Supreme, which comes topped with pepperoni, beef, ham, sausage and bacon, for just $4.29.

If you’re trying to find the best cheap pizza that’s also brick-oven cooked, Bertucci’s has it covered. Normally, a small cheese Bertucci’s pizza would run you $10.29, which isn’t too bad. Using the promo code FSI5AT, however, you can cut the price by $5 for some real savings.

According to local news source Visir, the president took questions from students. He answered questions about various topics like sports -- and then the pineapple question came up.

Not only did Jóhannesson speak against the food, but if he had the power to pass laws on it own, he would ban it.

The president has a 97 percent approval rating in his country ... but will this contentious statement change that?