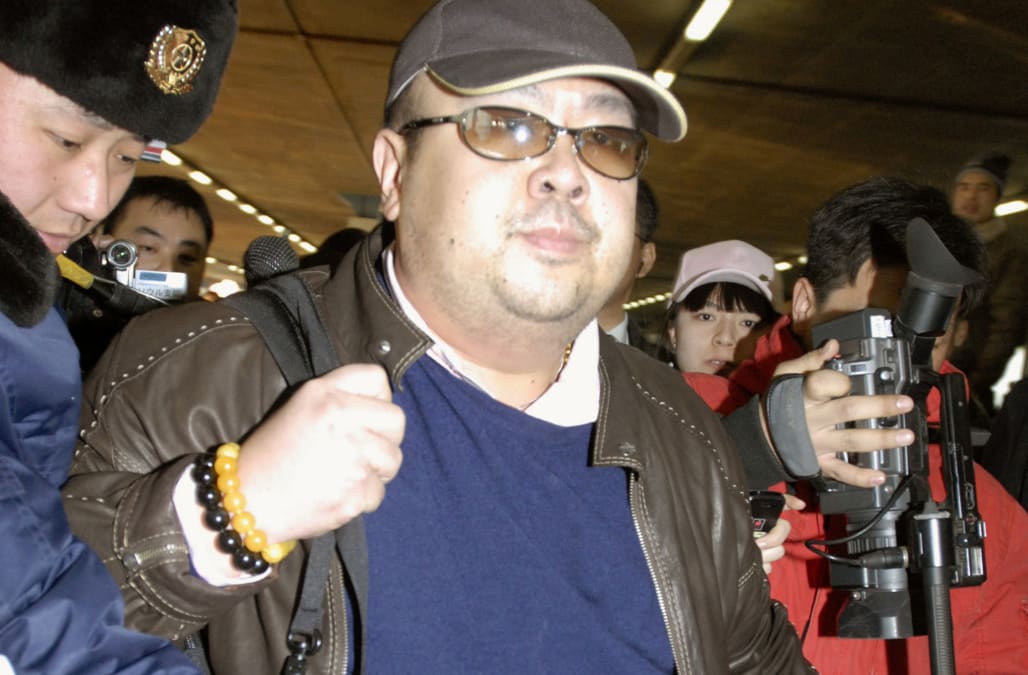 Video released Monday appears to show the moment that Kim Jong Nam was attacked and killed in a Malaysian airport.

The video, first aired by a Japan's Fuji TV, was shot by security cameras inside Kuala Lumpur airport.

It shows a woman coming up behind a man, believed to be Kim, putting her arms over him and apparently pulling something across his face.

This combo shows a file photo (L) taken on May 4, 2001 of a man believed to be Kim Jong-Nam, son of the late-North Korean leader Kim Jong-Il, getting off a bus to board an All Nippon Airways plane at Narita airport near Tokyo and a file photo (R) of his half-brother, current North Korean leader Kim Jong-Un, on a balcony of the Grand People's Study House following a mass parade in Pyongyang on May 10, 2016. The half-brother of North Korean leader Kim Jong-Un, who has been murdered in Malaysia, pleaded for his life after a failed assassination bid in 2012, lawmakers briefed by South Korea's spy chief said on February 15, 2017. Jong-Nam, the eldest son of the late former leader Kim Jong-Il, was once seen as heir apparent but fell out of favor following an embarrassing botched bid in 2001 to enter Japan on a forged passport and visit Disneyland.

A man (R) believed to be North Korean heir-apparent Kim Jong Nam, is escorted by police as he boards a plane upon his deportation from Japan at Tokyo's Narita international airport in Narita, Japan, in this photo taken by Kyodo May 4, 2001.

In a picture taken on June 4, 2010 Kim Jong-Nam, the eldest son of North Korean leader Kim Jong-Il, waves after an interview with South Korean media representatives in Macau. Kim Jong-Nam was in the limelight with Seoul's JoongAng Ilbo newspaper carrying a snatched interview with him at a hotel in Macau. Jong-Nam declined knowledge of the warship incident, it reported, and said his father is 'doing well'. North Korean Leader Leader Kim Jong-Il on June 7 attended a rare second annual session of parliament at which Kim's brother-in-law was promoted and the country's prime minister was sacked, state media reported.

This photo taken on February 11, 2007 shows a man believed to be then-North Korean leader Kim Jong-Il's eldest son, Kim Jong-Nam (C), walking amongst journalists upon his arrival at Beijing's international airport. The half-brother of North Korean leader Kim Jong-Un, who has been murdered in Malaysia, pleaded for his life after a failed assassination bid in 2012, lawmakers briefed by South Korea's spy chief said on February 15, 2017.

A man believed to be North Korean heir-apparent Kim Jong-nam emerges from a bus as he is escorted by Japanese authorities upon his deportation from Japan at Tokyo's Narita international airport May 4, 2001. Believed to be Kim Jong-nam, eldest son of North Korean leader Kim Jong-il, the man entered Japan with a forged passport on Tuesday, but was deported to China on Friday.

He was taken from the airport by ambulance after the incident on Feb. 13, but died on the way to hospital.

Malaysian police believe that he was poisoned, and South Korea has said it believes the killing was carried out by North Korean agents.

The killing has set off a diplomatic spat between Malaysia and North Korea. Pyongyang's ambassador has said it will refuse to accept the results of a Malaysian police investigation into Kim's death, accusing authorities of "colluding with outside forces" — a veiled reference to rival South Korea.

Meanwhile, Malaysia has recalled its ambassador from Pyongyang for consultations, and summoned the North Korean ambassador in the country to explain the allegations.

Here's what else we know about the case so far: