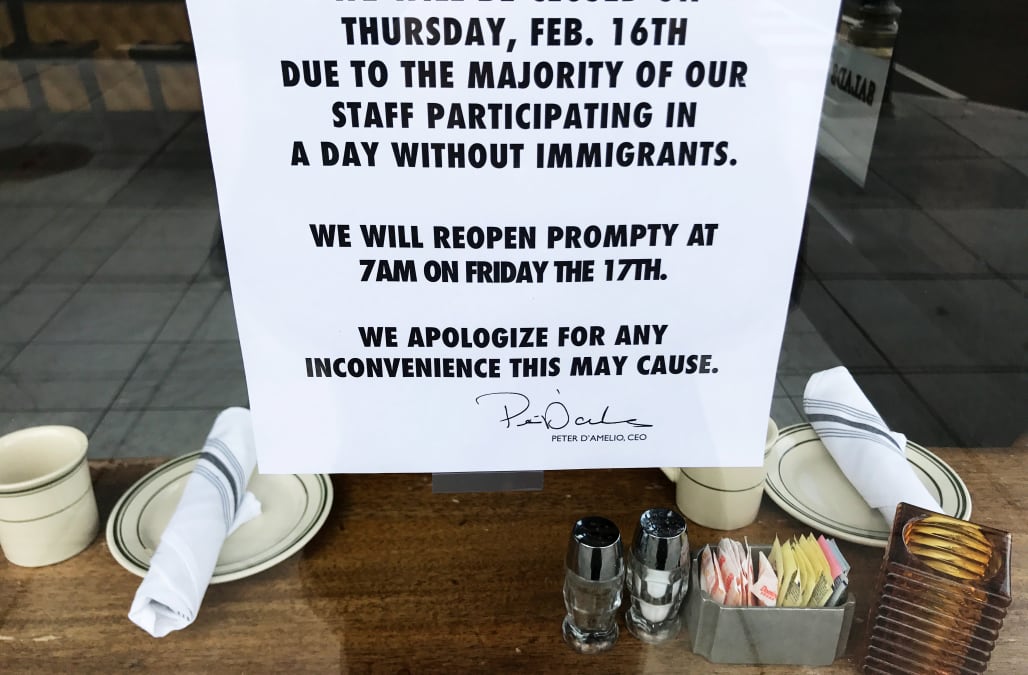 The call for support for "A Day Without Immigrants" has hit the restaurant community with tremendous impact.

The social justice movement, held Thursday to show just how much our society depends on an immigrant-based workforce, started in Washington DC but has spread to the restaurant industry on a more national level.

SEE ALSO: Why you can't get a Sweetgreen salad on Thursday in D.C.

We have made the decision to close the majority of our restaurants in NYC (Blue Ribbon Brasserie, Brooklyn, Sushi, Sushi Bar & Grill, Sushi Izakaya, Hi-Bar, and Downing Street Bar) tomorrow, 2/16 in solidarity with the #ADayWithoutImmigrants protests. We stand 100% behind our employees – whether they are immigrants or born in America, back of house or front of house. When employees who haven’t missed a day of work in nearly 25 years come to you and ask for a day off to march against injustice, the answer is easy. #ImmigrantsFeedAmerica @chefjoseandres

Celebrity chefs like Jose Andres, Rick Bayless and Eric and Bruce Bromberg have closed many of their restaurants in support of the cause.

Wbtv reports Andres is currently in embroiled in a lawsuit with Trump over a restaurant lease. Andres says, "I am an immigrant myself and a Hispanic Mexican myself[...]We have people that are part of the DNA. They are working on golf courses – maybe owned by Mr. Trump himself – in restaurants, in farms."

Andres expects to lose almost $100,000 as a result of today's closures, but the impact of the movement is more important to him than the cash.

In support of our people & #ADayWithoutImmigrants Thurs 2/16 we will not open @jaleo DC CC MD, @zaytinya or @oyameldc#ImmigrantsFeedAmerica

Other big names in the food business, like Tom Colichio and Mario Batali, are vocally supporting staff who are not coming into work today to call attention to the cause.

If members of my team decide to protest I will support their decision. https://t.co/v3mjoU7p85

We have a cultural mix in each resto. We are open but will not be fully staffed. We will honor all reservations but are in solidarity https://t.co/97MIwh7uIp

The reaction on social media has been largely, if not entirely, positive.

I'm so happy and proud you're a Chicagoan!!

Wbtv also reports,"Immigrants accounted for 7.1 million of U.S. restaurant workers in 2015, compared to 5.1 million who were born in the country."

And without any of them, it looks like the food industry in this country would be in dire straits.

The scene at 14th & V for #ADayWithoutImmigrantspic.twitter.com/Bdd5IYckBv

It's some food for thought.

More from Mashable:
Amazon's Echo Tap gets the one feature it should have had all along
Meanwhile, Australia's in the grip of an intense heatwave straight from hell
'Supernatural' star Ruth Connell previews Dean's memory loss and Rowena's brush with heroism