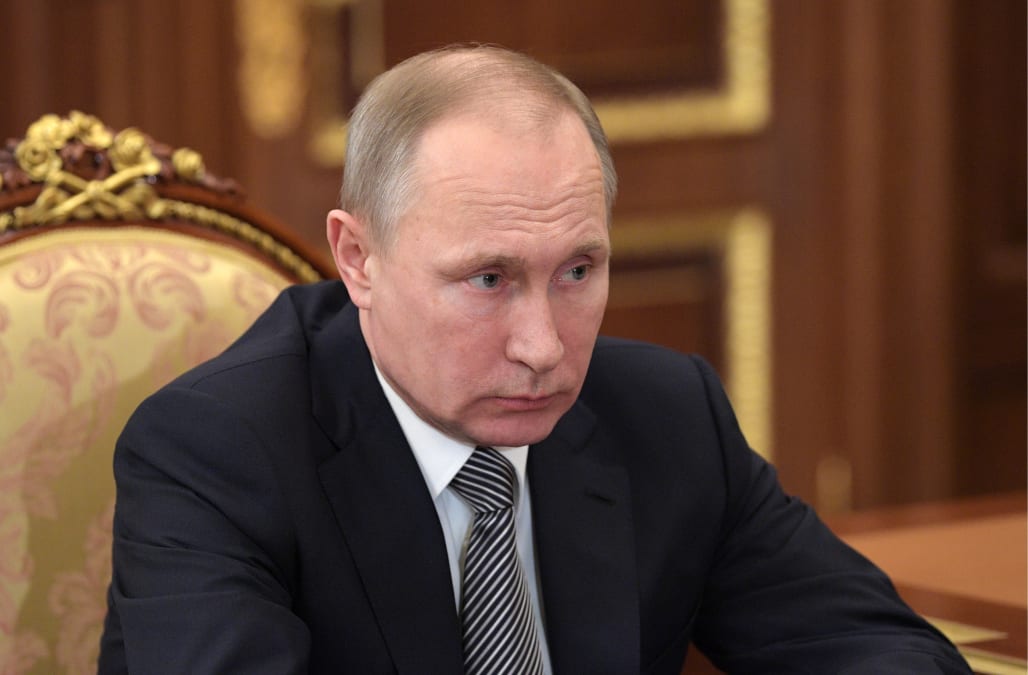 Russian opposition activist Vladimir Kara-Murza is on life support in Moscow for organ failure, and his wife has spoken out to say she believes he was poisoned.

In an interview with BBC's Sarah Rainsford, Evgenia Kara-Murza described her husband's symptoms of an accelerated heart rate and trouble breathing, before his organs began to fail at the hospital.

Kara-Murza is part of the Open Russia foundation, an organization of anti-Putin activists who call for open elections, civil rights reforms and a free press.

Kara-Murza's friend Boris Nemtsov was killed beside the Kremlin two years ago, but Kara-Murza carried on in his stead.

While the hospital will not comment publicly on his condition, Evgenia says their official diagnosis is an acute intoxication by an unidentified substance -- something she later put bluntly as "poisoning."

RELATED: The uncertain future of 2017

The uncertain future of 2017

RUSSIA'S GROWING INFLUENCE: Russian leader Vladimir Putin looks to position his nation as an alternate ally to countries such as the Philippines and Turkey who have been traditionally allied with the U.S.. Putin's Russia, accused of influencing the U.S. presidential election, could seek to cement their influence by providing support to other populists facing elections this year. REUTERS/Yuri Kochetkov/Pool

SYRIA'S SHAKY PEACE: A truce deal brokered by Russia and Turkey faces challenges as clashes between rebel and government forces continue. A lasting peace deal could prove elusive as the large number of warring factions seek to protect their own interests and territories. REUTERS/Khalil Ashawi

ISIS-INSPIRED ATTACKS CONTINUE: Following the highly orchestrated Islamic State attacks on Paris and Brussels, the world has witnessed a spate of attacks by individuals who appear to be inspired by the militant group, rather than in direct contact with them. 2017 looks set to see a continuation of these types of attacks as the year began with a mass shooting at a Turkish nightclub where the motive still remains unclear. REUTERS/Eric Gaillard

THE TRUMP BARGAIN: As President Trump takes office, the white working class that propelled him to the White House will be watching closely to see if he can bring back jobs as promised throughout the campaign. It remains to be seen if the divisive politics that characterized the bitter campaign will continue as Trump takes over the helm of a divided nation. REUTERS/Mike Segar

MERKEL'S POLITICAL FUTURE IN JEOPARDY: German Chancellor Angela Merkel's support for accepting refugees risks costing her re-election when Germans go to the polls later in 2017. Following the Berlin Christmas market attack and in the run-up to the election, Merkel will continue to face demands to take a much tougher line on immigration and security. REUTERS/Hannibal Hanschke

BREXIT IN REALITY: Britain will have to navigate how and when to trigger article 50 beginning the process to leave the European Union. How the decision affects immigration, trade and British citizens living in the EU member states should become clearer this year. REUTERS/Dylan Martinez

VENEZUELA CRISIS DEEPENS: The oil-rich but cash-strapped nation faces a dire economic panorama of worsening food and medicine shortages as its socialist system continues to unravel. With few signs of financial relief on the horizon, President Nicolas Maduro faces escalating street protests as patience wears thin even among his supporters. REUTERS/Carlos Eduardo Ramirez

RACE RELATIONS IN FOCUS: With the retrial of former police officer Michael Slager in the shooting death of Walter Scott slated for March, the Black Lives matter movement and other groups protesting racial injustice will be watching for a verdict. REUTERS/Jonathan Bachman

MIGRANTS ON THE MEDITERRANEAN: As temperatures rise, the number of migrants making the dangerous crossing to Europe could increase again despite a record number of deaths of those traversing the Mediterranean in 2016. REUTERS/Yannis Behrakis

PIPELINE DREAMS AND NIGHTMARES: The success of the Standing Rock protesters to halt the Dakota Access pipeline has set a precedent for how environmental groups could disrupt planned pipeline projects. REUTERS/Stephanie Keith

CLIMATE CHANGE DISCORD: Top scientists say Trump's vow to pull the United States out of the Paris climate-warming accord would make it far harder to develop strategies to lessen the impact of global warming. Though temperatures in 2017 are expected to dip from the record highs of 2016, how the world views climate change and what to do about it will remain a hot topic. REUTERS/Alister Doyle

RIGHT-WING RISING: France's National Front leader Marine Le Pen will likely compete in a presidential run-off election in May that will test whether her brand of populism resonates in a nation that has been hit with attacks on Paris and Nice. REUTERS/Pascal Rossignol

RAQQA OFFENSIVE ESCALATES: An operation by a U.S.-backed alliance of Syrian armed groups' to retake the northern city of Raqqa, the de facto capital of Islamic State in Syria, looks set to continue in tandem with the offensive on the militant group's Iraq stronghold of Mosul. Trump's campaign promise of a secret plan to fight Islamic State will be forced into the spotlight. REUTERS/Rodi Said

THE DOW'S CLIMB: U.S. stocks saw solid gains in 2016, buoyed by a post-election rally that fueled the Dow Jones Industrial Average to approach 20,000 points but whether the rally will contine in 2017 is up for debate. REUTERS/Brendan McDermid

A NEW ARMS RACE: With both Putin and Trump planning to modernize their nation's nuclear arsenal, the prospect of a looming arms race is back on the table. When asked to clarify a tweet on nuclear capabilities, Trump said "Let it be an arms race. We will outmatch them at every pass and outlast them all." REUTERS/Joshua Roberts

DROUGHT THREATENS FAMINE: Charities have repeatedly warned about the threat of renewed famine as Somalia continues to be plagued by poor rains and conflict, as well as shortages of aid. REUTERS/Feisal Omar

TURKEY'S MEDIA CRACKDOWN: Turkey now imprisons more journalists than any other nation following a crackdown in the wake of the nation's coup attempt, according to the CPJ. The extent of the crackdown has worried rights groups and many of Turkey's Western allies, who fear President Erdogan is using the emergency rule to eradicate dissent. REUTERS/Murad Sezer

SNAPCHAT DEBUT: Snapchat filed for an initial public offering in 2016 putting the messaging app a step closer to the biggest U.S. stock market debut since 2014. The Venice, California-based company could go public as soon as March and be valued at $20 billion to $25 billion, making it the largest IPO since Chinese e-commerce giant Alibaba Group Holding Ltd. REUTERS/Brendan McDermid

"This is poisoning," Evgenia wife said. "There are no other options left."

Evgenia says she has sent DNA samples to Israel and France for further toxicology testing.

"Anything can happen to people who choose to stand up to Putin," she said. "We are hoping to find some answers."

Sen. John McCain spoke in favor of Vladimir Kara-Murza on the Senate floor on Tuesday, as he slammed President Trump for defending Vladimir Putin over the weekend when he said he "respects" him and normalized the concept of nation state leaders as "killers."

"We got a lot of killers," Trump said. "What, you think our country is so innocent?"

Sen. Marco Rubio has also expressed concerned over Kara-Murza's illness, and believes Putin should be held accountable if any evidence is discovered of foul play.

"Vladimir Putin does not deserve any benefit of the doubt here, given how commonplace political assassinations and poisonings have become under his regime," said Rubio. "I am praying that Kara-Murza's condition improves."

RELATED: Vladimir Putin throughout the years

More from AOL.com:
Christopher Steele, Trump dossier author, is a real-life James Bond
Mikhail Gorbachev warns: 'Looks as if the world is preparing for war'
Russians suspected of aiding investigations into hacking are being arrested and possibly murdered