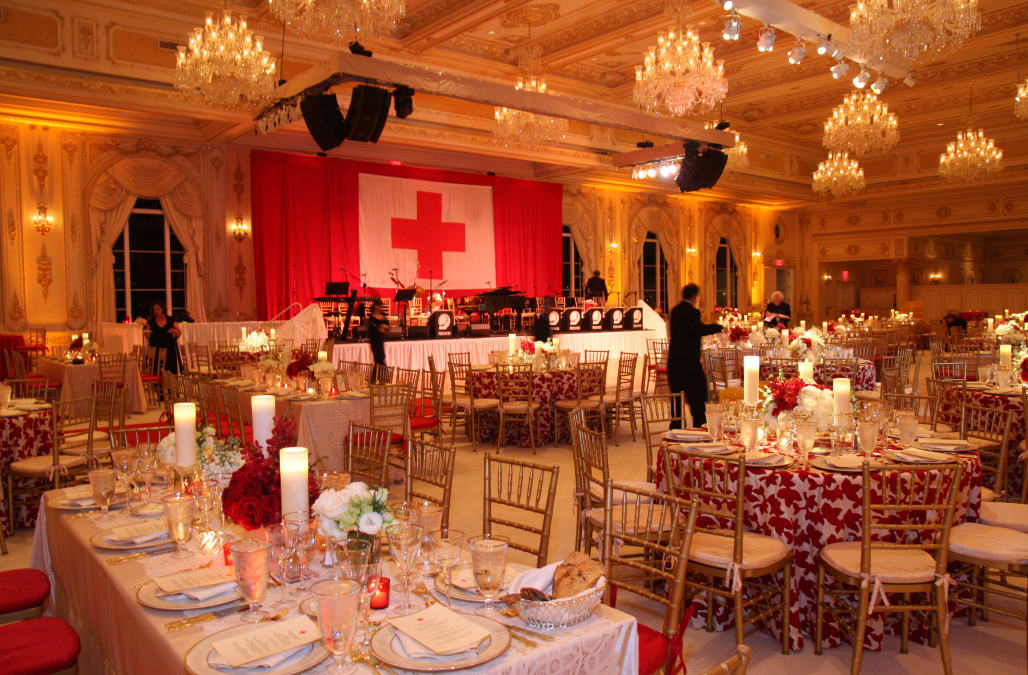 President Trump is scheduled to go to the Mar-a-Lago Club in Florida to attend the annual International Red Cross Ball this weekend. Despite the Trump family owning properties around the world, the Palm Beach resort has a special place in the businessman-turned-politican's heart. For over 20 years, Trump and his family have spent Thanksgiving in the ornately decorated dining hall. Trump's third wedding to Melania Knuss was held at the ocean-side estate, as well as the weddings of his sons, Donald Jr. and Eric. His mother's meatloaf recipe is even on the menu.

The Mar-a-Lago Club has the best meatloaf in America. Tasty. http://t.co/3GS8TRgM

Mar-a-Lago began as the personal property of Marjorie Merriweather Post, heiress of what would eventually become General Mills, Inc. She finished construction on the waterfront Palm Beach mansion in 1927 for $8 million. The U.S. Department of the Interior designated the 17-acre property as a historic site in 1969. The land's public ties continued upon Post's death in 1973, when she willed it to the Federal Government to be used as a retreat for presidents and diplomats.

According to Time Magazine, Congress was reluctant to maintain Mar-a-Lago at a $1 million per year upkeep and let it fall into disrepair. The government gave the property back to the Post Foundation, who subsequently sold it to Donald Trump in 1985.

American businessman Donald Trump talks with a group of Boy Scouts on a tour of the Mar-a-Lago estate, Palm Beach, Florida, 1999.

General view of the upper balcony area at The Mar-a-Lago Club November 12, 2005 in Palm Beach, Florida.

An American flag flies over Donald Trump's Mar-A-Lago club November 1, 2006 in Palm Beach, Florida. The town of Palm Beach has cited Donald Trump because the flag is too big and does not meet the town's specifications. A hearing is scheduled.

Trump's purchase was riddled in controversy. His original offer of $28 million was rejected so he bought the beachfront directly in front of the property and threatened to build a wall to wreck Mar-a-Lago's views and value. The price kept falling until Trump was able to buy it for a mere $8 million, including Post's antiques and furniture. Trump used it as his private residence for 10 years, until April 1995 when he established it as The Mar-a-Lago Club.

So, what do the select 500 members of Mar-a-Lago receive for the steep price?

Ten minutes from the Mar-a-Lago club is the International Golf Club-West Palm Beach, one of the top golf courses in eastern Florida.

Trump reportedly earned $15.6 million from Mar-a-Lago in 2014, according to financial disclosures filed prior to the start of his presidential campaign. While member fees do contribute to this number, the club also serves a secondary purpose as a event venue. Parties can be held outside by the pool, or in one of two ballrooms, including the Donald J. Trump Grand Ballroom, which has been coated in $7 million worth of gold leaf.

Or if you simply want a glimpse of Trump's Floridian life without fully committing, keep your eyes peeled for the Palm Beach social calendar.

Trump's kids and their spouses share romantic photos
Today is a special day for more than one reason....Happy Anniversary @erictrump 💜
The day before I became a "Mrs" 💗
What do you say after the most incredible weekend of your life? THANK YOU! Thanks to a team that made it all seem effortless! @jzevents and @prestonrbailey, you blew us (and everyone!) away!💐✨ My glam squad, @amykmua and @mattshair, thank you for making me feel like a supermodel! 💄 and, the one who captured every shot (including this one!), @donnanewmanphoto - you are all masters at your craft and we are so blessed to have had you as our team! @erictrump and I send you all of our gratitude and love. #thankyou 💗
Chasing waterfalls
Hawaii
Happy 7th anniversary Jared ❤️ I love you more than I could possibly express and am so grateful to have you by my side.
Happy #ValentinesDay to my one true love. I'm grateful for you daily—and can't wait to give you a very special gift in just a few more weeks!! ❤️ #GrowingFamily #Grateful #VDay
#throwbackthursday pic with Vanessa somewhere along the campaign trail during the primaries.
11 years and 5 little monsters down and still going strong. Happy anniversary Vanessa, I love you. #anniversary
A little #throwbackthursday to the first Christmas Vanessa and I spent together. Now with 5 kids every day is like a toddler version of Game of Thrones in our house. #tbt
#GoPack!!!!! 🙌🏽🐺🏈
BEAMING WITH PRIDE! My husband gave an incredible speech tonight! #RNCincLE ❤️🇺🇸
Best part about breaking your collarbone? Breakfast with your husband and mom coming to visit 💜
#flashback 2008 ⛸ 🏒
A romantic date night on vacation. 😘
...magical night at The Morgan Library celebrating the engagement of @claire_fivestory + Michael Olshan. Congratulations to the sweet, charming and generally perfect couple!
Date night! 😍
😘🇺🇸
#Throwback #yehaw ✨🇺🇸
Caucus kiss 💋 #caucusfortrump #iacaucus #Trump2016
Wishing a very happy birthday to my father-in-law @realdonaldtrump today - Cheers to the best year yet!
#tbt 💘
Vanessa and I are ready for #nerdprom aka The White House Correspondants Dinner... A long way from where I was in Indiana a few hours ago in camo. All in all I much prefer the camo!!! #mrsvanessatrump #makeamericagreatagain #trump2016 #WHCD
Haven't done the late night pizza run in a while but when the boss/wife is hungry you have to make it happen. Great day to be a New Yorker. #newyorkvalues #nyprimary
Also attending boys night out.... All of our wives!!! Here with @mrsvanessatrump
This time last year... #MetGala #throwback
Being silly at the #WhiteHouseCorrespondentsDinner 😜 Thanks for snapping this photo @karliekloss! #flashbackfriday #whcd
Last run! 🎿👏
Last night in Paradise #Maldives
Date night @eggshopNYC! 😊
NYC
A great long weekend spent with the people I love most in this world.
New Year's Eve!
Honeymoon safari in South Africa. #fbf #anniversary
Flash back from last night. I wonder at what point i thought it made sense to steal my husband's tie??? Hummm.. @emilyrebeccaward
Dinner at Kong. #paris
Morning on the Bosphorus. #istanbul
Up Next