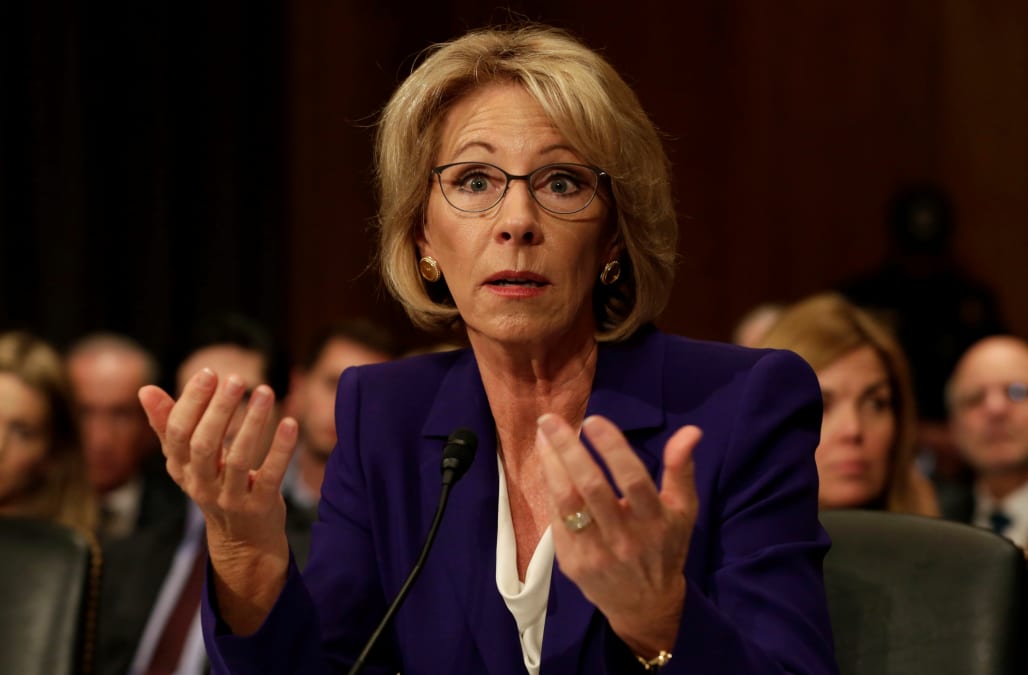 On Tuesday, it was revealed that some of the written responses that Donald Trump's education secretary nominee, Betsy DeVos, delivered to the Senate may have been lifted from other sources without attribution, as reported by the Washington Post. This revelation comes as DeVos' nomination cleared the Senate Health, Education, Labor, and Pensions Committee and now moves onto a full Senate vote.

DeVos's confirmation hearing was marred in controversy as she seemed to have difficulty answering standard questions regarding her role. And her inability to give straight answers in some instances earned the chagrin of Senator Elizabeth Warran, who refused to shake her hand. Senate Minority Leader Chuck Schumer also said she would "decimate" public schools. So, Democrats asked her to complete a questionnaire to further gain a grasp of her knowledge of the position. DeVos seemed to want to ace this proverbial test, so she answered them to the best of her ability, even possibly lifting quotes without attribution.

This could have been a simple mix up with an intern forgetting to properly attribute, but some of the lifting is quite blatant. CNN noted that there is one example with a lifted quote directing from the Department of Education's website. During the committee vote, Murray pointed out some of the discrepancies, which were rushed with their proofreading efforts:

"We just received responses to hundreds of written questions yesterday, less than 24 hours before this scheduled vote, and with no time to fully review and ask any follow-up questions. Though, I will say, upon initial review, many of the responses look copied and pasted from previous statements or are simple reiterations of the law and no true responses at all."

This is not the first time a Trump appointee to have plagiarism accusations tossed their way. Monica Crowley bowed out of a national security post appointment in January after it was revealed that her memoir and PhD dissertation contained many passages lifted from various uncited sources,