Chilling video surfaces of 'ghost' playing piano by itself 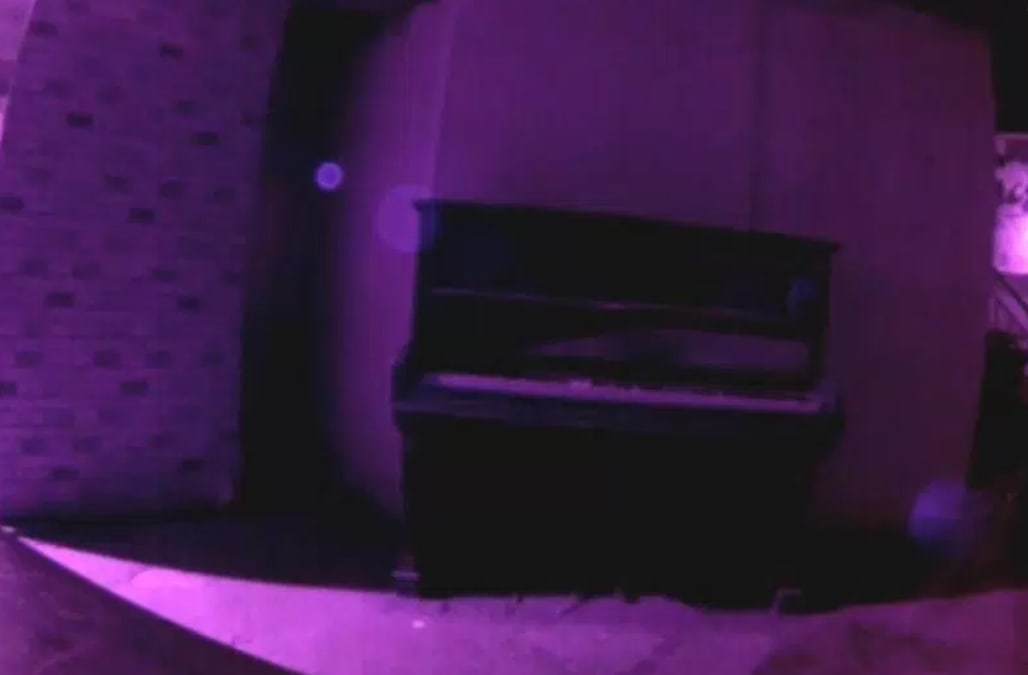 A ghostly presence was captured on an English ghost hunter's camera, which was installed to discover the truth behind an eerie phenomenon - a piano playing entirely by itself.

After seeing the eerie happening alone, experienced ghost hunter Lee Roberts set up a video camera to capture footage at The Village building in Mansfield, Nottinghamshire.

"The reason we had set up the camera at the piano is that on a few occasions people had heard it play these notes but never caught it so we had no proof," Roberts said.

"My first thought is from a scientific point of view to try to explain it. I have asked in the day time to see if anyone has heard it but no one has witnessed it – but then no one is down there in the day time near it."

He thinks a spirit or demon may be inhabiting the building after paranormal investigators held multiple seances there.

In the Nevada desert about 65 miles northwest of Las Vegas is an unexpected and uncanny sight: picture-perfect houses filled with mid-century furniture, cars in driveways, food on kitchen tables, and mannequins posed as though engaged in household tasks. Built by the Federal Civil Defense Administration, the site was used to test the impact of an atomic bomb (detonated nearby on May 5, 1955) on a "typical American community" of homes, a radio station, and other buildings made of wood, brick, and steel. What remains of the fake community, now called "Doom Town," is a reminder of the paranoia and fear of the Cold War years and a highlight of monthly tours of the Nevada National Security Site, which are free but must be reserved more than a year in advance -- there are no slots available until the end of 2017.

Built by a coal company in 1911, what is now called the Concrete City was a small settlement where coal miners could rent a seven-room house for $8 a month. Believed to be the first example of tract housing, the 22 homes were built entirely out of concrete. The damp climate and porous concrete meant every household needed a garden hose to regularly wash the "culm" from walls inside and out. The settlement was abandoned in 1924 when a new owner didn't want to pay to install a sewer system demanded by the township. Attempts to demolish the site were quickly given up after a hundred sticks of dynamite failed to topple even one of the concrete structures. A small wading pool in the town square is all that remains of a common courtyard that once included tennis courts, a baseball field, and a playground, and the homes are riddled with bullet holes after being used for training by the military and police and fire departments.

Garnet was born during the gold rush of 1895 and home to nearly a thousand miners and homesteaders at its peak. The mines were quickly depleted and most people were gone by 1912, but two dozen wood buildings persist, making this one of the best-preserved mining towns in the U.S. It looks almost like a movie set for an Old West boomtown. Today it is owned and managed by the U.S. Bureau of Land Management. Volunteers recruited to maintain the site give $3 tours and get free lodging in a rustic Garnet cabin, as well as a small stipend. Beware, though: They report paranormal sightings and unearthly noises in the night.

Rather than ghost stories and local legends, this coal mining town is the site of a real-life horror story. In 1913, thousands of miners went on strike to protest their living and working conditions, only to be kicked out by their employer. About 1,200 workers and their families built a makeshift tent city near the mine and continued to protest. In April 1914, when the miners were celebrating Greek Easter, militiamen surrounded the camp, peppering it with gunfire and setting the tents ablaze. Eleven children and two women huddled in a foxhole were among those who lost their lives as the camp burned to the ground. The Colorado Coal Strike has been called the deadliest in U.S. history, claiming between 69 and 199 lives. Today, those who visit the remains of the company town, near Trinidad, can see the foxhole and a monument to those killed in the massacre.

A zinc mining town, Rush hit its peak during World War I, when it had a population of 22,000. It was the second-largest city in the state, and one of the most prosperous. When zinc prices declined after the war, so did the town, and it was officially declared a ghost town in 1972. What makes Rush unique is that it is cared for by the National Park Service as part of the Buffalo National River park, which means the original buildings and mines are well-preserved. A number of hiking paths wind around the town and mines, with plaques telling the story of the town, making it a favorite spot for locals looking for a hike with a bit of history.

A reverend described Bodie in 1881 as "a sea of sin, lashed by the tempests of lust and passion." At its peak, the gold-mining town had more than 10,000 residents and 30 mines, as well as all the features of a Wild West boomtown: saloons, brothels, opium dens, gambling halls, and breweries. Hundred-gallon barrels of whiskey were rolled down the main street, where there were 65 saloons in just a mile. Street fights, shootouts, and killings happened on a daily basis, and the town earned a reputation for lawlessness and vice. The boom lasted just a few years, and by 1900 the town was in decline. Devastated by multiple fires over the years, the town had only a handful of residents by the end of World War II. Two were killed in a crime of passion, three died of mysterious illnesses, and Bodie was officially a ghost town by 1950. A number of ghosts supposedly inhabit the buildings, and it is also said that anyone who takes something from Bodie -- even a pebble -- will be cursed with misfortune. Today, about 10 percent of Bodie's original buildings endure, largely unchanged, and visitors can see a logbook recording all the missing items people have returned to try to lift their curses.

The town formerly known as Boston, Ohio, is cloaked in tales of Satan worship, children murdered by serial killers, cult rituals, and ghostly figures, but the real history of "Helltown" is compelling enough. In 1974, in response to concern over the destruction of the nation's forests, President Gerald Ford signed a bill to create a national park in Boston Township. Using the powers of eminent domain, the National Park Service began buying Boston piece by piece, forcing people from their homes -- prompting one resident to write on a wall, "Now we know how the Indians felt." By the time the town was emptied, plans for a national park had fallen by the wayside. What remains today are boarded-up houses, old farm equipment, crumbling bridges, and even an old school bus. Helltown now serves as a place for locals to go get creeped out by ghost stories.

This particular town, near Hildebran, has a unique claim to fame: It was used as the setting for District 12 in the "Hunger Games" movies. It was a classic American mill town that sprang up around a yarn manufacturer opened in 1905. As the economy and nature of manufacturing changed, towns like this one suffered. The mill finally shut down in 1973, and the last resident left in 1987.

Africatown represents a unique chapter in African-American history. The last slave ship arrived in America in 1860, more than 50 years after the African slave trade was outlawed. It was intercepted by authorities, and the 32 people brought over as slaves from Ghana were given land in Alabama. They created a self-governing society, living off the land and transplanting their culture and language to the settlement. Africatown flourished as emancipated slaves joined the community, and paper mills and other industry provided employment to residents. But the pollution also made Africatown less desirable. As the original settlers died and the following generations assimilated, it largely disappeared. Today, much of the area is part of Mobile, and the original homes and cemetery make up the Africatown Historic District on the National Register of Historic Places.

The inspiration behind many a creepy movie, Centralia was once home to more than 2,000 people. Nearby coal mines caught fire in 1962 and continue to burn. Today Centralia is a ghost town with sulfurous steam spewing out of the ground. It's best to visit in the fall and winter, when low temperatures make it easier to see the steam.

REUTERS/Lucas Jackson (UNITED STATES)
Up Next

He says the investigators are known to play with Ouija boards next to the piano.

Roberts' earlier footage at The Village captures members of his team becoming frightened by the instrument after hearing it play notes despite no one being behind it.

But Roberts remains open to non-supernatural explanations for why the piano is playing by itself.

"The scientific explanation could be that a change in temperature at night is making the piano keys sound," Roberts said. "However there are no windows down there and the temperature is roughly the same both day and night so I don't think that is the explanation."

"It could be something spiritual. A lot of people use the ledge table nearby for their experiments, whether it is with Ouija boards or other methods. But there are lots of people trying to contact spirits so one could be trying to respond by playing the piano to make them take notice."

Just to be sure, however, he and his team have already made plans to return in February to try to make contact.