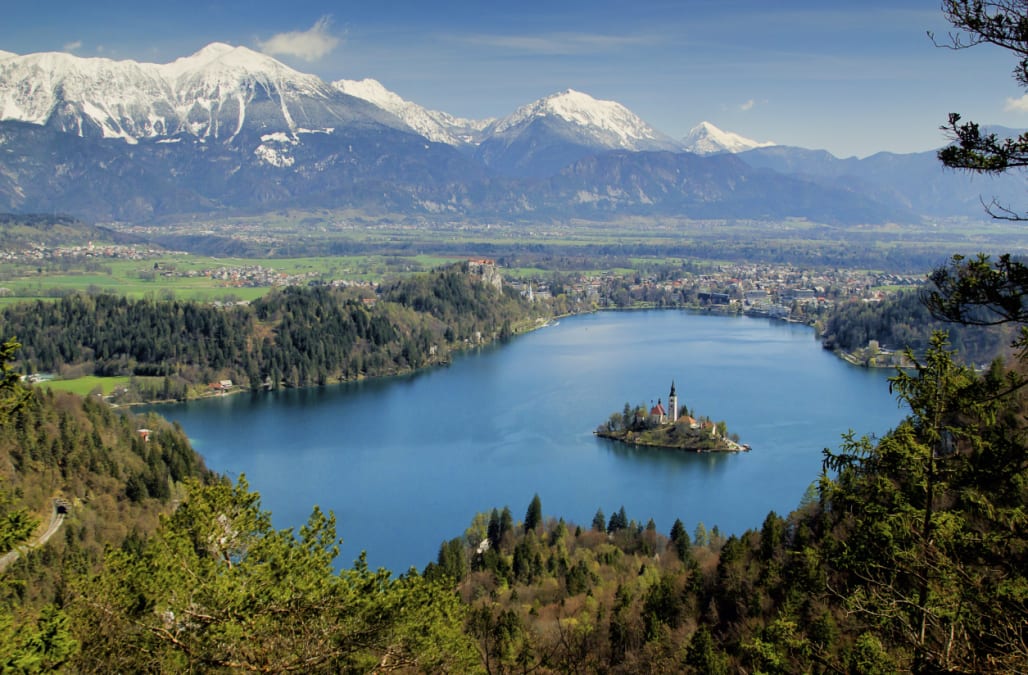 Imagine a place with Venetian canals, the terra-cotta roofs of Prague, rich vineyards of France, the castles and soaring mountains of Switzerland and natural beauty of Canada, all compact into an area smaller than New Jersey.

Slovenia feels deeply familiar, despite being relatively unknown to many Americans.

That is, until Donald Trump started his campaign last year, and all eyes turned to future first lady Melania.

The second-ever foreign-born first lady was born in 1970 in the picturesque town of Novo Mesto before moving to Sevnica, an Eastern bloc in former Yugoslavia. Since her husband's election victory, the two million-person country has been catapulted into the spotlight. According to TMZ, President Borut Pahor and Prime Minister Dr. Miro Cerar sent Melania a congratulatory letter after the election and thanked her for 'raising visibility of our central-European country.'

Stunning pictures of Melania Trump's homeland, Slovenia
Slovenia, Bled, Lake Bled and Julian Alps, church of the Assumption
Predjamski grad in winter, Slovenia
Bled Castle, located at the top a cliff, one of the oldest historic monuments in Slovenia. Was built in 1004. Alpine mountains can be seen at the background.
Ljubljana, Slovenia
Lake Bled in summer, beautiful island in the middle of a lake
Slovenia, Primorska, Piran, Church of St. George (Cerkev sv. Jurija)
Here is a Spring day with verdant Spring grape vines growing in the low hill vineyards outside the village of Brda in the Western region of Slovenia.
The river Ljubljanica runs through Ljubljana the capital of Slovenia.
Hiker stands admiring the view from the peak of the mountain he has hiked in Triglav National Park, in the Julian Alps, Slovenia
Mediterranean town of Piran on the Slovenian Coast
Aerial view on a city roofs, capital of Slovenia,
Slovenia, Primorska, Piran, Tartini Square at night
Picturesque karst features illuminated in the cave
Travelers or hikers in the mountains in the National Park Triglav. Nature landscape. Amazing view on Alps: valley and mountains at summer. Mangart, Julian Alps, Slovenia.
Elevated View of Lake Bled in the Autumn
Valley with the lake in the Triglav National Park. The water surface reflects the surrounding mountains in Julian Alps , Slovenia
Bohinj lake in Slovenian national park Triglav with Julian Alps reflecting on surface
Slovenia, Triglav National Park, Lake Bohinj and Church of St. John Baptist at dusk
The Predjamski grad or Predjama Castle is a Renaissance castle built within a cave mouth near the town of Postojna in Slovenia.
Slovenia, Lower Styria Region, Ptuj, town on the Drava River banks, the City Tower
Ptuj, Slovenia - February 7, 2016 - Traditional carnival on shrove sunday with traditional figures, known as kurent or korent in Ptuj, Slovenia
Slovenia, Primorska (aka Slovenian Littoral), Vipava Valley. The hamlet of Ipavei nestles in the hills of the Vipava Valley, an important fruit and particularly vine-growing region of western Slovenia.
sunset on mt Nanos above Vipava Valley Slovenia central Europe and church of st. Hieronim
Waterfall at the dam in Vintgar gorge near Bled, Slovenia
Slovenia, Gorenjska, National Park Triglav, Vintgar Gorge
The Pokljuka Gorge in Slovenia is a 2-km-long ravine, which is a remnant of a stream that cut up to 50 meters deep into the limestone during the end of the Ice Age. As a visitor of the gorge, you can encounter beautiful natural bridges, overhanging rock faces, and a cave with natural windows.
Dandelions field
Kanin Ski Area near Bovec, Slovenia shows a gondola and distant peaks of the Julian Alps.
Slovenia
at sunset reflected in floodwater, Kozarisce, Notranjska, Slovenia
Julian Alps, Slovenia
Mountains in Triglav National Park in Slovenia.
Soca Valley, Slovenia
Up Next

The charming little nation is preparing for a tourism boom, particularly Sevnica, where Melania spent her childhood before moving to the capital city of Ljubljana, then to Milan to pursue a modeling career. The 4,500-person town is home to a medieval castle and a salami festival.

In addition to beautiful castles perched on hills and built into mountains, the Alps extend into Slovenia, creating breath-taking hiking trails and gorges. The Slovenes' appreciation for nature continues in their cities. Ljubljana was even named the European Green Capital for 2016, which, with it's 5,834 square feet of public green space per resident and laws preventing cars from running in the city center, comes as no surprise.

Slovenia extends all the way into the Mediterranean, which gives the coast a distinct flavor. And best of all, most of these wonders are within driving distance of Ljubljana, making it an easy trip.

With the strong dollar-to-Euro exchange rate, low costs of flights to Europe and Slovenes celebrating the 2016 election results, there has never been a better time to put Slovenia on your bucket list and then cross it off immediately.