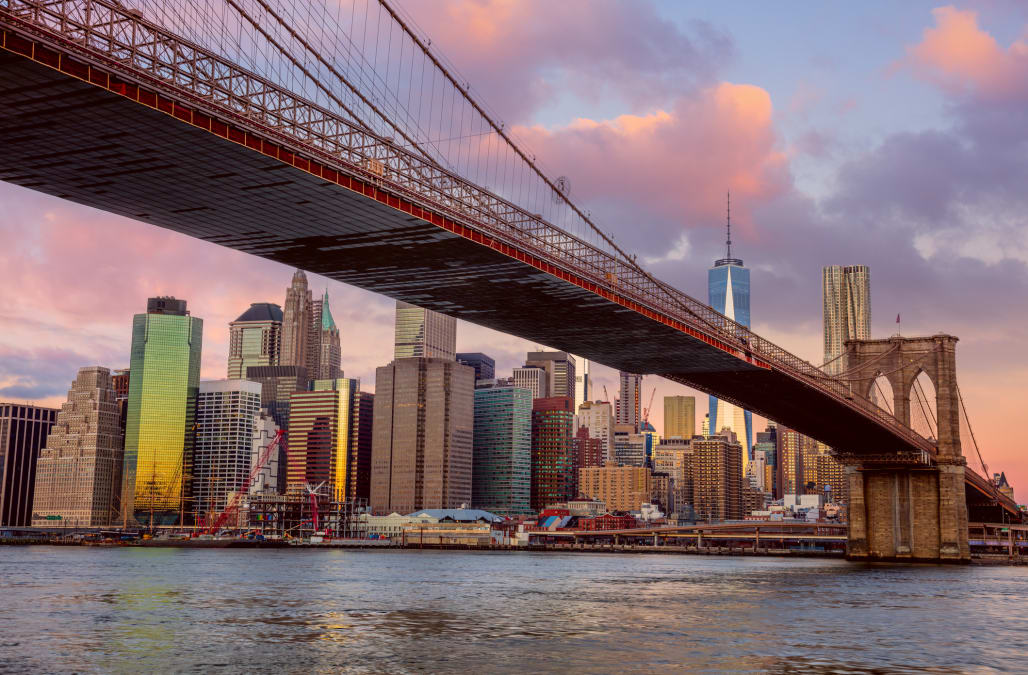 Last fall, New York governor Andrew Cuomo laid out a sweeping initiative for the bridges and tunnels of New York City. The "transformational plan," which is part of a larger, $100 billion infrastructure effort for the state, aims to "reimagine New York's crossings" for the 21st century and the future — a future that, in some aspects, looks to be straight out of Minority Report.

The plan calls for the installation of cameras equipped with advanced facial recognition technology in an effort to track everyone entering and exiting the city via the extensive network of tunnels and bridges. Those systems would be implemented in the name of increased security against terror threats, but its potential ramifications for privacy and abuse by law enforcement agencies has experts concerned.

Brooklyn bridge from East river at sunset with flare. Wall street area, Freedom tower and the Beekman tower are seen behind it.

The Hell Gate Bridge is a 1,017-foot (310 m) steel through arch railroad bridge between Astoria in the borough of Queens, Randall's/Wards Island (which are now joined into one island and are politically part of Manhattan), and The Bronx in New York City, over a portion of the East River known as Hell Gate.

This is an aerial photo of Brooklyn New York at sunrise with the Verrazano Narrows Bridge in the foreground.

(Jerry Trudell the Skys the Limit via Getty Images)

Cuomo's initial announcement was light on the details of how such a system might work, how it might be implemented and when.

But a Metropolitan Transit Authority (MTA) memo obtained by Vocativ though a Freedom of Information Act request provides some more insight into how the city might look to track the people inside the estimated 800,000 vehicles that cross through MTA tunnels and bridges every day.

The document, which was drafted by the MTA's Bridges and Tunnels division, was sent to contractors on Dec. 12, 2016 as a solicitation for "information of a Facial Detection and Recognition system," to be installed on nine MTA-controlled bridges and tunnels.

Specifically, the system the MTA is planning to implement will detect both individuals and their license plates using the tech.

According to Vocativ, another memo dated Dec. 23 extended the deadline for contractor submissions until Jan. 3 of this year. We don't know where the project stands at the moment, as Mashable's attempts to reach both the MTA and Governor Cuomo's office for comment were unsuccessful.

The implementation of this type of facial recognition system is troubling to Clare Garvie, a law fellow at Georgetown University's Center for Privacy and Technology and co-author of a report on law enforcement's unregulated use of facial recognition tech. Mashable spoke with her via phone about the issue (she also provided insight to Vocativ's report on the matter).

Since the system described in the MTA memo seems to be geared by counterterrorism, Garvie calls it "a law enforcement tool."

"Face recognition is a very unique surveillance tool because it's a biometric tool that can be used in secret, remotely without people knowing it's being used," she said. "That, and it can be used on a crowd of people passing by a particular point as opposed to just one individual at a certain time."

In Garvie's understanding, this system would theoretically check the scans of the faces it reads against a list of individuals identified as threats looking for a match. Given the current state of the tech, this list would have to be very small to work in real time — but as the systems improve, she says it's "very likely" that it would be feasible that those lists could grow.

Especially in light of the today's political climate and the current administration's statements about sanctuary cities, this type of targeted observation of the public on such a massive scale opens up the system to potential abuses — unless preemptive action is taken to set up safeguards.

"With the creation of a system like this, what really needs to be put in place is a prohibition on its use as a tracking tool," Garvie said. "New York needs to put in place public controls on who is enrolled in these systems to ensure that it won't be used to, for example, target immigrant communities for any reason in the future. The technology is improving rapidly so it's foreseeable that the systems will be able to do that in the future."

That said, the threat of potential abuse, along with the actual practical functionality of such a facial recognition system, is still in the future. Garvie believes these systems have to contend with too many variables to be effective today.

That's why she thinks it's so vital to implement policies that focus on the privacy and First Amendment rights of individuals before it can become a problem, rather than reacting to abuses after the fact.

"Imagine the worst case scenario of cameras that can identify people walking by and we might have that in the future," Garvie said. "We have law enforcement agencies really pushing to implement this technology, we have companies really pushing their realtime capabilities, and we don't have a similar move on the part of the public or the legislature, largely I think from lack of transparency about this."

BONUS: When does government regulation go too far?