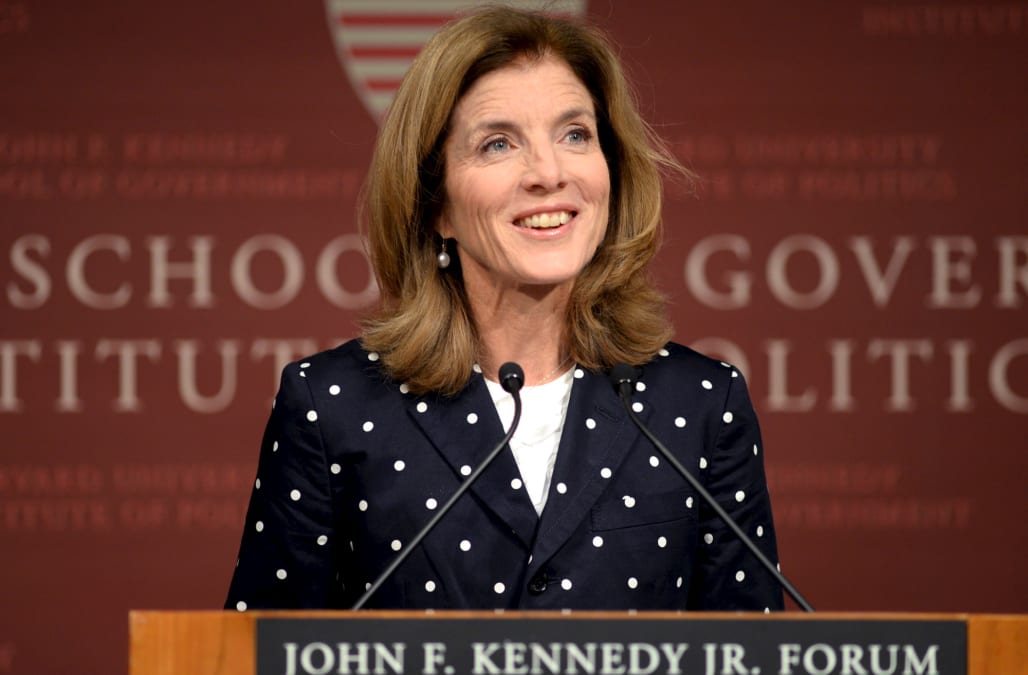 Caroline Kennedy may have some big political plans. The New York Post reports that Kennedy has her eye on a New York congressional or Senate seat.

She spent three years as U.S. Ambassador to Japan and 2018 is the earliest she could run for national office. Possible seats would be the seat of New York's junior Democratic Senator, Kirsten Gillibrand or Representative Carolyn Maloney who represents Kennedy's 12th District.

Caroline Kennedy Style Transformation
Caroline Kennedy was all dolled up in an adorable dress as she kissed her father John F. Kennedy on the cheek.
Caroline smiles in a white winter coat as she walks in front of her father, who holds one of her dolls in his hand.
Caroline, dressed in a sweet white dress, stood calmly next to her laughing brother and cousin outside of Buckingham Palace.
Jackie Kennedy watches proudly as Caroline christens the USS John F. Kennedy, dressed in a light blue dress.
Caroline and her mother step off a plane, both in very stylish double-breasted pea coats.
Caroline, dressed in white with high socks, with her mother to see "Sleeping Beauty" at the Metropolitan Opera House.
Caroline is dressed to ride at the 17th Annual Horse Show.
Sporty and comfortable, Caroline plays tennis in Central Park.
Caroline Kennedy and her friends at the Forest Hills Tennis Tournament, Caroline wearing a sundress.
Caroline attends a party at the Rainbow Room during the RFK Pro-Celebrity Tennis Tournament, wearing a flowing white maxi skirt.
Caroline attends the screening party for "Bobby Deerfield" in a patterned jacket.
Attending her brother's graduation from Phillips Academy, Caroline chose a lavender dress, matching her mother's white and purple ensemble.
At her own graduation from Harvard University, Caroline belts a floral dress with a hot pink accent.
Caroline looked lovely on her wedding day, standing with her new husband Edwin Schlossberg.
Caroline chose lots of pattern when she accepted the official painting of the 1995 Special Olympics.
Caroline smiles with her brother John F. Kennedy Jr., both in black and white.
Caroline attends the Jackie O Awards in a black gown with sheer paneling.
Caroline looked positively campaign-worthy in this white dress at the Democratic National Convention.
Caroline glows in this crimson gown as she and her husband attended a gala benefit for the American Ballet Theater.
The Kennedys would be proud of the grace and presence of their daughter as she presented the exhibition Jacqueline Kennedy: The White House Years.
Wearing a pearlescent dress and grey cardigan, we love the introduction of metallic hues into Caroline's wardrobe.
SJP (one of our favorite fashionistas) and Caroline Kennedy both look stunning and professional at the "Shop for Public Schools" event.
Caroline chose this youthful metallic-adorned black dress for the 2010 CFDA Fashion Awards.
Caroline looked stunning in this black gown, seeming to channel her mother at the 33rd Annual Kennedy Center Honors.
Caroline attends a signing for her book in a lovely patterned dress and cardigan.
Up Next

It's not the first time Kennedy has toyed with the idea of a political run.

In 2008, she was a prominent contender for Hillary Clinton's vacant New York Senate seat , but Kennedy suddenly dropped out and cited "personal reasons."

The Post report continues that Kennedy is seen in some circles as the next Hillary Clinton and her ambitions may include a White House run in 2020.