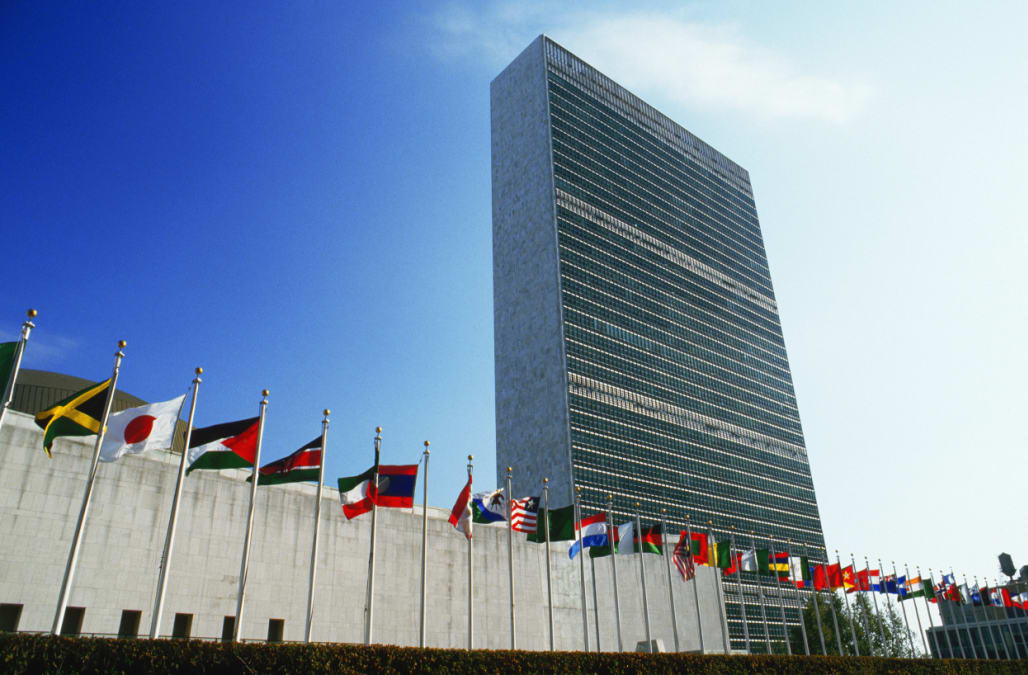 A bill introduced by Alabama Rep. Mike Rogers earlier this month calls on the US to "terminate" its membership in the United Nations (UN) and effectively sever all ties with the organization.

The offices of the congressmen did not immediately respond to requests for comment.

The bill proposes barring the US from committing funds or troops to UN peacekeeping operations worldwide, and stipulates that the UN must vacate property owned by the United States government. It would repeal the 1973 Environment Program Participation Act, strip UN employees of diplomatic immunity in the United States, and repeal the US' membership and participation in the World Health Organization.

Construction of the United Nations building in 1947
Ceremonial demolition of two stores on First Avenue and 42nd Street takes place in New York City to prepare for the construction of the United Nations Building, July 1947. Left to right: Assistant Secretary General of the UN, Byron Price (1891 - 1981), Manhattan Borough President Hugo Rogers and Mayor of New York City William O'Dwyer (1890 - 1964). (Photo by FPG/Archive Photos/Getty Images)
Aerial view of the excavation site for the United Nations Building, New York, New York, September 1948. The area is bounded by 42nd Street on the south, 48th Street on the north, First Avenue on the west, and Roosevelt Drive on the east. Visible at the far right is the Queensboro Bridge. (Photo by FPG/Getty Images)
UNITED STATES - OCTOBER 25: Workmen putting cornerstone of the United Nations Secretariat Building in place before start of dedication ceremony. Cornerstone is engraved with the name United Nations in English, French, Chinese, Russian and Spanish. (Photo by Hank Olen/NY Daily News Archive via Getty Images)
(Original Caption) Living so near to the site of the future home of the United Nations on the East side of Manhattan gave James Rath the idea of keeping a photographic record of the building there. Mrs. Rath, (above) knits as she looks at the steel structure of the U.S. Steel's American Bridge Company. From this fire escape on First Avenue, her husband takes his pictures of the gradual growth of the U.N. community.
(Original Caption) 12/8/1948-Munhall, PA- The first steel beams for the 29-story United Nations Secretariat Building are loaded at the Homestead Works of U.S. Steel's Carnegie-Illinois Steel Corp., where they were rolled. After going through a fabrication plant at Ambridge, Pennsylvania, where they will be made into sections, the beams will be sent on to New York. Each beam measures 30 feet in length and weighs about five tons.
(Original Caption) On the Manhattan site of the future home of the United Nations, the Secretariat Building is still under construction. On the east wall, which is built entirely of glass windows, is the scaffolding and hoist tower, serving as a work elevator right up to the top on the 39th floor.
10th October 1949: Left to right: Warren Austin, Lou Chandell, President of the Fuller Construction Company, Dick Streeter, Supt., American Bridge Company, Trygve Lie, the UN Secretary General, and Alexander Rudinski, a Polish United Nations, displaying the United Nations Flag in front of the incomplete United Nations building in New York. (Photo by Keystone/Getty Images)
circa 1950: The 6000 windows of the United Nations Secretariat building in mid-town Manhattan, New York, are cleaned monthly by seven men. Window cleaner Pete Warkanes is hanging from the top left of the building. (Photo by Douglas Grundy/Three Lions/Getty Images)
May 1961: Norbert Gernavage cleans the windows of the United Nations headquarters in New York. The Chrysler Building is visible in the background. (Photo by Helmut Kretz/Keystone/Getty Images)
Up Next

The bill's language is strong, and it's an extreme longshot to garner the necessary support to pass the House and move on to the Senate. Rogers tried, unsuccessfully, to pass a similar bill in 2015.

"I suspect foreign governments will be more interested in what the administration does with regard to the UN," said Stephen Biddle, adjunct senior fellow for defense policy at the Council on Foreign Relations and professor of political science and international affairs at George Washington University.

"This proposal doesn't strike me as something that's likely to rise above the noise," Biddle added, "but it does play into the administration's narrative about opposing multilateral institutions and withdrawing from global leadership roles."

President Donald Trump has characterized the UN as "just a club for people to get together, talk and have a good time" and promised that relations between the US and the UN "will be different" during his presidency.

Trump's criticism of the organization came after the UN Security Council passed a resolution in late December calling on Israel to halt building settlements on occupied Palestinian land. Trump, along with Israeli Prime Minister Benjamin Netanyahu, urged the US to vote against the resolution, which was sponsored by Egypt. But the US ultimately abstained, and the resolution passed.

Many Republican lawmakers have slammed the UN for having an "anti-Israel" bias that aims to isolate and weaken the Jewish state. Arizona Sen. John McCain said that the UN vote marked "another shameful chapter in the bizarre anti-Israel history of the United Nations." House Speaker Paul Ryan called the vote "absolutely shameful" and vowed that "our unified Republican government" would work to reverse the resolution.

Few, if any, mainstream Republican lawmakers have gone as far as to advocate for a full withdrawal of the US from the UN. In 2015, Kentucky Senator Rand Paul said he thought he'd be "happy to dissolve" the United Nations, because he "dislike[s] paying for something that two-bit Third World countries with no freedom attack us and complain about the United States."

But some have said they would support defunding the organization, which received $594 million — roughly 22% of its total budget — from the US in 2016.

In early January, BuzzFeed reported that the House Freedom Caucus was drafting a bill, proposed by South Carolina Sen. Lindsey Graham, to sever financial ties with the organization. Republican Sens. Tom Cotton, John McCain, and Ted Cruz said that they would support the initiative.

"I anticipate this vote will create a backlash in Congress against the United Nations," Graham said in a statement shortly after the Israel resolution passed. "The United Nations will regret this vote and I hope the Obama administration will realize the massive mistake they made on their way out of the door."

Nikki Haley, Trump's pick to replace Samantha Power as the US ambassador to the UN, said during her Senate confirmation hearing last week that the UN is a body that is "often at odds with American national interests," and called the US' decision to abstain from the Israel vote "a terrible mistake."

Still, she said that while the US should reexamine its "disproportionate" financial contribution to the UN, she doesn't think there should be "a slash and burn" of the US' support for the organization.

SEE ALSO: Newt Gingrich: Madonna 'ought to be arrested' for saying she thought about 'blowing up the White House'