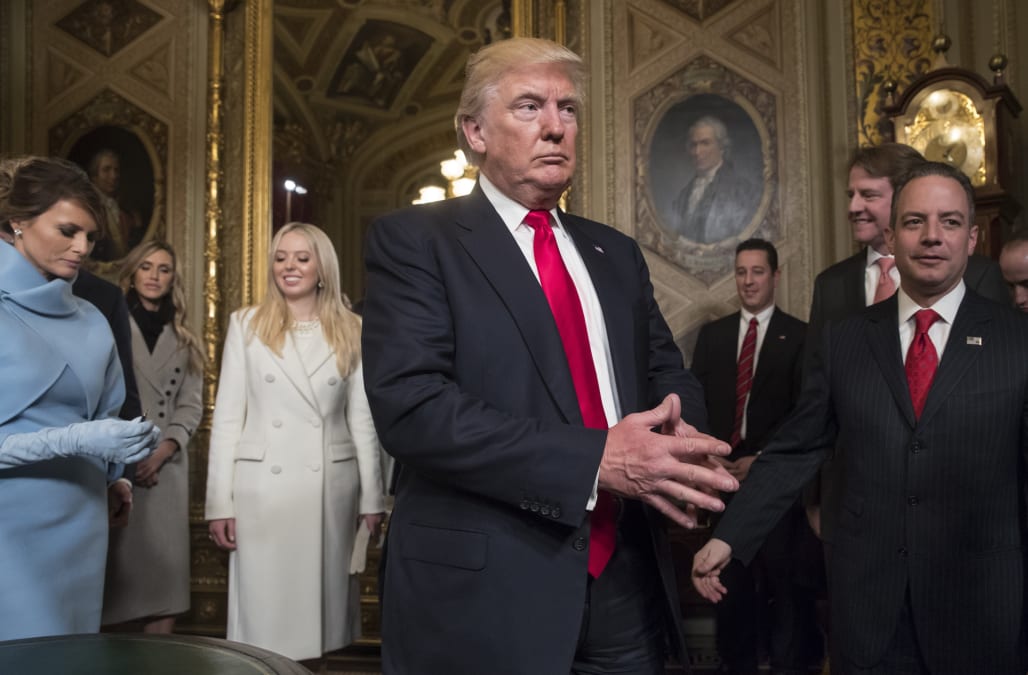 President Donald Trump tweeted on Saturday morning that he was "honered" to serve as 45th president of the United States. Moments later, the tweet was gone — presumably deleted by the president or his team.

Under the 1978 Presidential Records Act, the president must obtain the "views of the Archivist of the United States" before disposing of any records. And his tweets — whether sent from his personal Twitter account or his official @POTUS account — are considered a matter of public record.

Women's March protests are unfolding around the world
Protesters carrying banners take part in the Women's March on London, as they stand in Trafalgar Square, in central London, Britain January 21, 2017. The march formed part of a worldwide day of action following the election of Donald Trump to U.S. President.
People gathered beside Brandenburg Gate in Berlin, holding "Love trumps hate" signs.

A woman waits for the start of the #IWillGoOut rally, organized to show solidarity with the Women's March in Washington, along a street in New Delhi, India January 21, 2017.

People hold signs to show solidarity with the Women's March in Washington and many other marches in several countries, in Madrid, Spain January 21, 2017.

Protesters take part in the Women's March on Dublin, Ireland January 21, 2017. The march formed part of a worldwide day of action following the election of Donald Trump to U.S. President. REUTERS/Clodagh Kilcoyne
MELBOURNE, AUSTRALIA - JANUARY 21 : People hold banners as they gather for a rally, protesting US new President Donald Trump following his inauguration on January 21, 2017 in front of the Parliament House, in Melbourne, Australia on January 21, 2017. Rights groups, mostly includes women, marched in solidarity with Americans to speak out against misogyny, bigotry and hatred. (Photo by Recep Sakar/Anadolu Agency/Getty Images)
Protesters carrying banners and placards take part in a Women's March in Stockholm, Sweden, January 21, 2017. TT News Agency/Pontus Lundahl via REUTERS.?ATTENTION EDITORS - THIS IMAGE WAS PROVIDED BY A THIRD PARTY. FOR EDITORIAL USE ONLY. SWEDEN OUT. NO COMMERCIAL OR EDITORIAL SALES IN SWEDEN. NO COMMERCIAL SALES.
People protest the inauguration of new US President Donald Trump in front of the US Embassy in Buenos Aires on January 21, 2017. / AFP / Emiliano Lasalvia (Photo credit should read EMILIANO LASALVIA/AFP/Getty Images)
BRUSSELS, BELGIUM - 2017/01/20: A protester carries a Don't assault women banner at the Lights for rights Women's march in Brussels for equal rights and against Trump. (Photo by Frederik Sadones/Pacific Press/LightRocket via Getty Images)
BOSTON - JANUARY 21: Thousands of people filled Boston Common for the Boston Women's March for America on Saturday, Jan. 21, 2017. The Boston event is one of more than 670 marches being held nationwide and globally, a day after President Trump took office. (Photo by John Tlumacki/The Boston Globe via Getty Images)
WASHINGTON, DC - JANUARY 21: People listen to a speaker during a rally at the Women's March on Washington, Jan. 21, 2017. (Photo by Jessica Rinaldi/The Boston Globe via Getty Images)
PARK CITY, UT - JANUARY 21: Crowds gather for The Women's March on Main covered by The IMDb Studio during The 2017 Sundance Film Festival on January 21, 2017 in Park City, Utah. (Photo by Rich Polk/Getty Images for IMDb)
Up Next

Mic has reached out to the the National Archives office and David Ferriero, the archivist of the United States, to determine whether president Trump followed the necessary procedures before deleting the tweet. We also attempted to reach out to the White House press office, but were redirected to an automated message. The switchboard operator informed said by telephone that, if that's the case, there's no one in the office. We will update when we hear back.

More from AOL.com:
Showers to dampen inauguration of Donald Trump as 45th US President
Trump is creating a huge problem for the future of the auto industry
Trump had to give up the Samsung phone he uses for tweeting