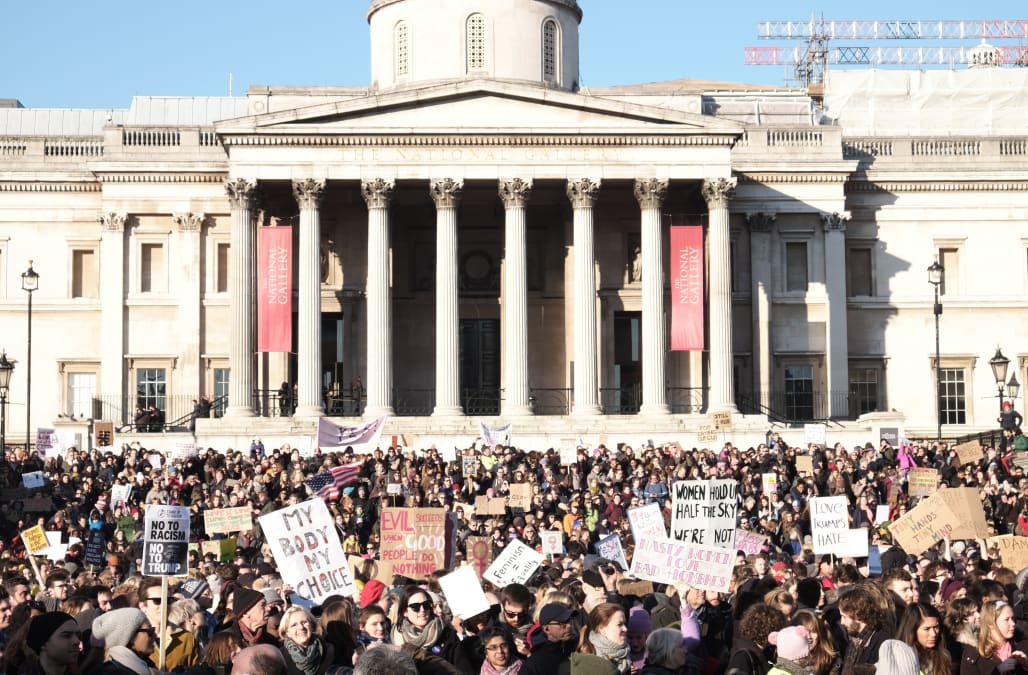 Borders have already gotten stricter under President Donald Trump. According to a report in the Guardian, several Canadian and French citizens hoping to join Saturday's Women's March in Washington were denied entry to the United States at a land border crossing in Quebec. The hopeful protesters said the denial came after sharing their plans to attend the march with border agents.

When the group of eight — six Canadian citizens and two French — told border agents at a Quebec-New York crossing of their plans, they were told to pull over. Then their cars and mobile phones were thoroughly searched. The would-be marchers were also fingerprinted and photographed. The process lasted two hours, according to the Guardian.

Border agents told the two French citizens that, because they were being denied entry, any futuretravel to the U.S. would now require a visa.

Signs from Women's March Washington D.C.
Up Next

"Then for the rest of us, they said, 'You're headed home today,'" Sasha Dyck, a hopeful protester, told the Guardian. Dyck also said the group was told they would be arrested if they tried to cross the border again this weekend.

Dyck drew a stark comparison between her 2017 border treatment and her treatment in 2009, when she traveled to Barack Obama's inauguration.

"I couldn't even get in for this one, whereas at the other one, the guy at the border literally gave me a high five when I came in and everybody was just like, 'Welcome,'" Dyck said. "The whole city was partying; nobody was there to protest Obama the first time."

Dyck's was not the sole story of being denied entry. One Montreal resident, Joseph Decunha, said he was not only turned away, but a border agent also asked about his and his friends' political views.

"The first thing he asked us point-blank is, 'Are you anti- or pro-Trump?'" Decunha toldCBC News. Decunha was denied entry for "administrative reasons."

Decunha sad he was also asked if he had ever traveled to the Middle East or if he "believed in violence."

"It felt like, if we had been pro-Trump, we would have absolutely been allowed entry," Decuncha told CBC News.

Another group, including a British citizen, a Canadian and two Americans were held at the same Quebec-New York border crossing for three hours. The group was questioned, fingeprinted, photographed and eventually denied entry for planning to attend what a border agent called a "potentially violent rally," according to one potential protester.

U.S. Customs and Border Protection told the Guardian it does not discuss individual cases for privacy reasons.

"We recognize that there is an important balance to strike between securing our borders while facilitating the high volume of legitimate trade and travel that crosses our borders every day, and we strive to achieve that balance and show the world that the United States is a welcoming nation," the agency said in an email to the Guardian. The agency did not immediately respond to Mic's request for comment.

More from AOL.com:
Pope urges Trump to show concern for poor, be guided by ethical values
Ready for day one: Trump poised to take executive actions
What will President Donald Trump do on his first day in office?