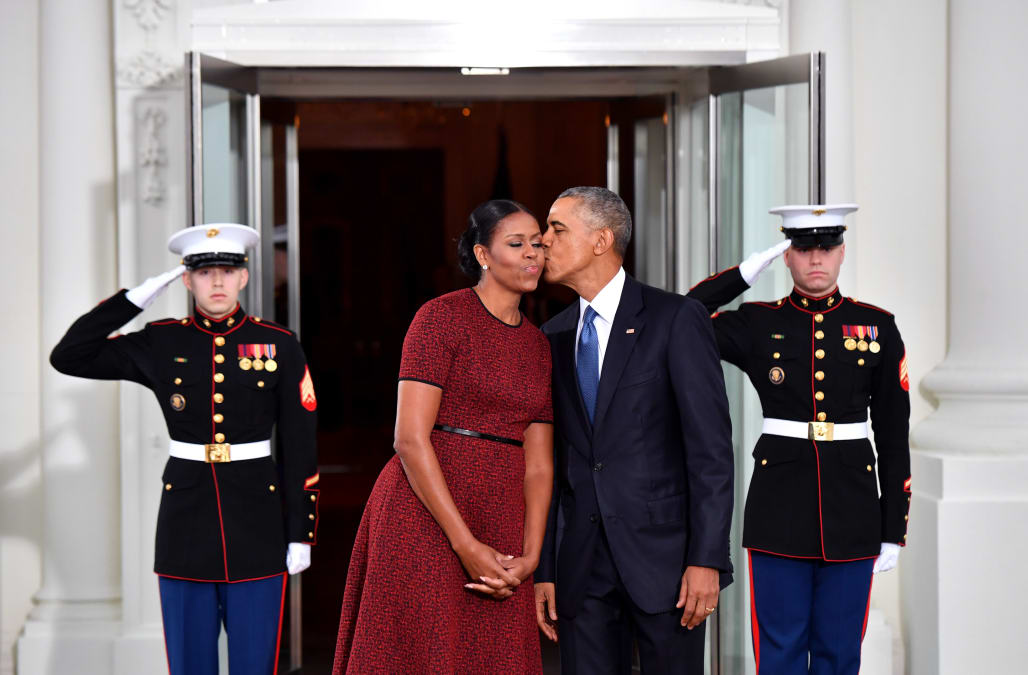 Barack and Michelle Obama will be focusing on building a "living working center for citizenship" after leaving the White House, the couple announced Friday.

"More than a library or museum, it will be a living center for citizenship," Obama said in a video. "That's why we want to hear from you. Tell us what you want this project to be and tell its what's on your mind."

The building, which will serve as his presidential library, will be located on the South Side of Chicago, where Obama began the community organizing that set him on the path to the White House.

Michelle added, "Send us your ideas, your hops, your ideas about what we can achieve together. Tell us about the young leaders and companies and organizations that inspire you."

1. Secret Service agents avert their eyes as the Obamas share a private moment on Inauguration Day 2009.

2. Dancing at the White House during the Governors Ball in February 2009.

3. Holding hands while heading to Camp David for the first time in March 2009.

4. In the White House's Red Room with adviser Valerie Jarrett in March 2009.

6. ​Posing for their first holiday portrait at the White House.

8. ​President Obama chats with Michelle as they walk the White House Colonnade in Sept. 2010.

9. The Obamas visit the Flight 93 crash site on the 10th anniversary of the Sept. 11 terrorist attacks.

10. ​Barack whispers something to Michelle during a break between events at the 2011 UN General Assembly.

11. Obama jokes with Michelle after she says Dr. Jill Biden is her "favorite person in the room."

12. ​The First Couple shares a private dance before a May 2012 concert at the White House.

16. ​The First Couple smooches for the KissCam during a timeout at an Olympic basketball exhibition game in 2012.

17. The Obamas made history with this August 2012 hug -- this became the most tweeted photo of all time after Obama sent it out to his followers on election night.

18. ​Barack gives Michelle a kiss during the inaugural parade.

21. ​The President sings 'Happy Birthday' to Michelle in the Blue Room of the White House. The First Lady's new hairstyle attracted a lot of attention from this photo.

22. ​The Obamas arrive for an official dinner at the Presidential Palace in Dakar, Senegal, June 27, 2013.

25. ​The Obamas and their pets Sunny and Bo, wait to greet visitors in the Blue Room during a White House tour.

27. ​The Obamas hold hands during the event to commemorate the 50th Anniversary of Bloody Sunday and the Selma to Montgomery civil rights marches on March 7, 2015.

28. The Obamas pose for a "Gimme Five" initiative photo in the East Room of the White House during the annual Easter Egg Roll, on April 6, 2015.

29. The first lady snuggled against the president during a video taping for the 2015 World Expo in the Diplomatic Reception Room of the White House on March 27, 2015.

30. ​The Obamas react to a child in a pope costume and mini popemobile as they welcomed children during a Halloween event on the South Lawn of the White House.

The Obama's also said that they're planning on taking a little vacation before diving into the presidential project.

"We want to tell you what we're going to be up to next," the couple said in the video announcement released Friday morning. "First we're going to take a little break. We're finally going to get some sleep and take some time to be with out family and just be still a little bit."

The soon-to-be former president also thanked the American people, promising to see "all of you soon."