By Valerie Volcovici and Timothy Gardner 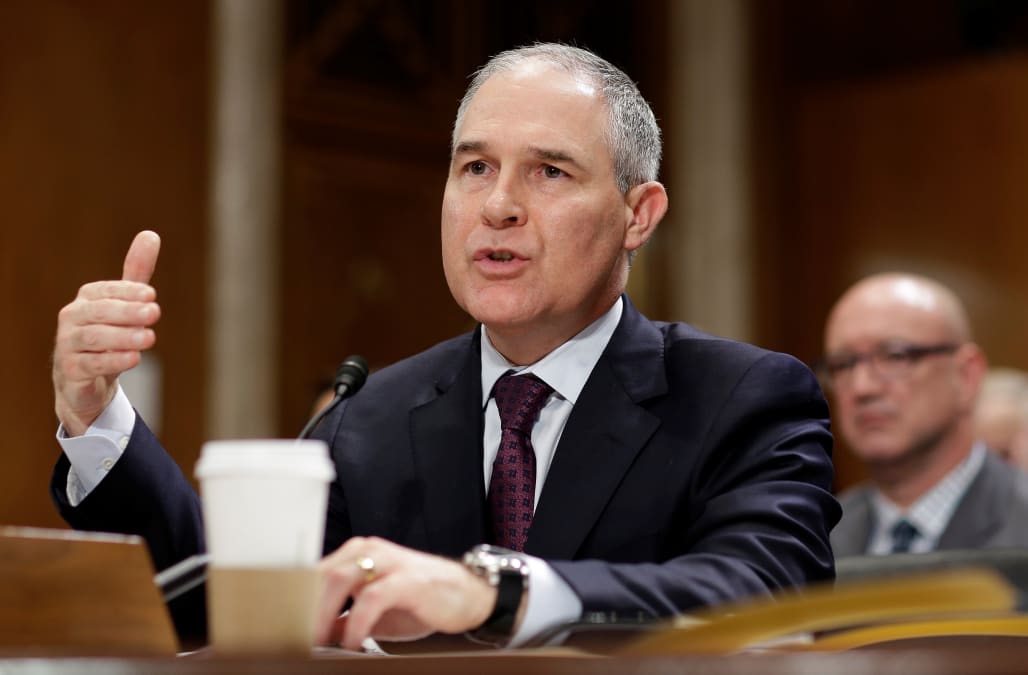 Pruitt, 48, is a climate change skeptic who sued the agency he intends to run more than a dozen times as Oklahoma's top lawyer. He also chaired the Rule of Law Defense Fund, a group of conservative attorneys general that vehemently opposed a number of EPA regulations.

Both his opponents and his supporters believe his record indicates he will aggressively carry out Trump's campaign vows to slash EPA regulation in order to boost industry, including U.S. oil and gas drilling and coal mining.

"Why are folks so concerned?... We're concerned that we won't be fine with the environment," said Democratic Senator Tom Carper of Delaware. "You joined in a dozen or more lawsuits... going after the EPA. That's why you have the kind of concern you're witnessing here today."

In prepared remarks that were interrupted by protesters shouting "There is no planet B," Pruitt said he would seek to ensure environmental rules were effective without hurting development.

"Environmental regulations should not occur in an economic vacuum. We can simultaneously pursue the mutual goals of environmental protection and economic growth," he said. He added that he would seek to give states more authority to regulate their own environmental issues.

Under questioning, Pruitt also said he would recuse himself from ongoing cases against the EPA if required to do so by the EPA's ethics commission.

Trump has promised to refocus the EPA on its core values of protecting air and water quality, while scrapping many of President Barack Obama's initiatives to combat global climate change by targeting carbon dioxide emissions.

Pruitt has said he believes climate change exists, but that the debate over what is causing climate change is not yet settled. U.S. government agencies said on Wednesday that world temperatures in 2016 hit a record high for the third year in a row, creeping closer to a ceiling set for global warming.

For weeks, environmental groups have campaigned to urge lawmakers to block Pruitt's nomination, saying he is doing the bidding of energy companies and industry groups that have contributed to his election campaigns.

During the hearing, Democratic Senator Jeff Merkley of Oregon showed a blown-up image of a letter Pruitt sent to the current EPA administrator several years ago opposing regulations limiting methane emissions from the energy sector, which he said had been written by Oklahoma company Devon Energy.

New Jersey Democratic Senator Corey Booker later asked Pruitt if he had sent similar letters of behalf of Oklahoma citizens affected by pollution, citing statistics showing the state has among the highest asthma rates in the country.

"Did you even file one lawsuit on behalf of those kids?"

Republicans on the committee meanwhile focused their questions on how Pruitt will work to avoid pollution crises like the lead contamination crisis affecting Flint, Michigan, and criticized the Obama administration's climate regulations.

Asked what would be his guiding philosophy as EPA administrator, he said: "I believe that the role of the regulator is to make things regular. Public participation, cooperative federalism...is central to restoring confidence and certainty to those that are regulated."

He said he would also support the U.S. renewable fuels program, which requires biofuels like ethanol to be blended in gasoline, but said the program needed some tweaks.

Pruitt's hearing is one of a series of sessions to vet Trump's senior appointees since last week. Trump's pick for Secretary of State, former Exxon Mobil CEO Rex Tillerson, was questioned by lawmakers last week. His choice for Energy Secretary, former Texas Governor Rick Perry, is scheduled to testify on Thursday.