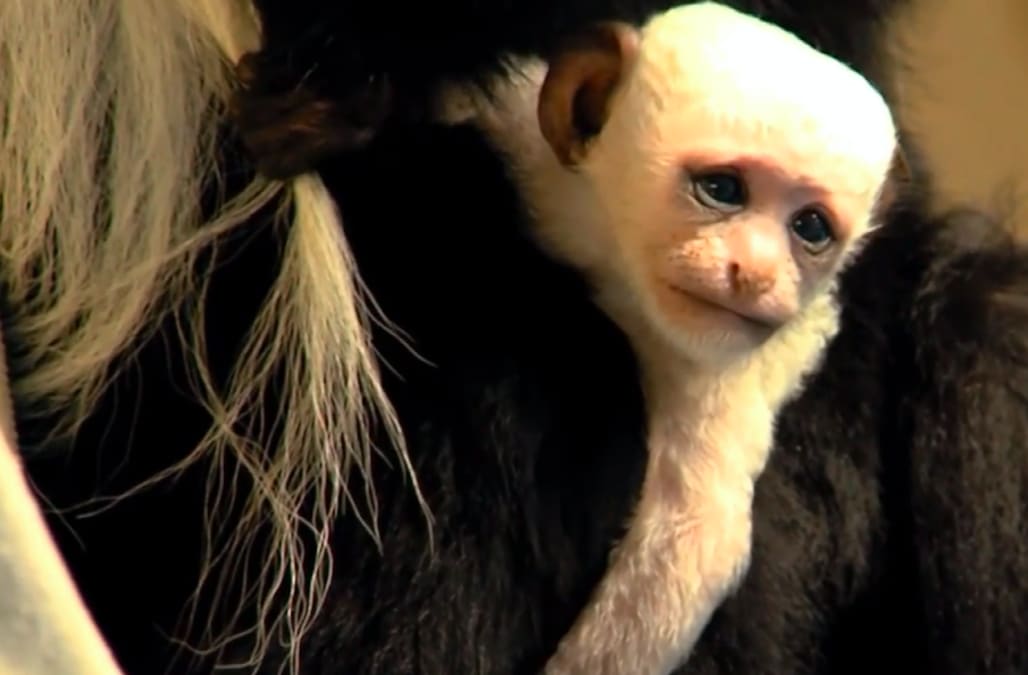 The Cincinnati Zoo has welcomed a snow white guereza colobus monkey as their first baby of 2017.

The baby monkey born last week to 4-year-old mother Adanna and 21-year-old Tiberius has not yet been named nor has its gender been determined.

"We saw a lot of light-hearted behavior between the three of them," the zoo's primate curator said in a press statement.

Guereza colobus monkeys, native to parts of Africa, are known for their lack of a thumb. Instead, they have a non-opposable stub.

Despite its parents donning a vibrant black and white coat, the zoo explained in a press release that guereza colobus monkeys are born stark white with pink faces and blue eyes meant to help them be more visible to the mother in a dense rainforest environment.

Zoo officials expect the baby to grow a black and white coat just like its parents by the time it reaches 6 months old.

The newborn and its mother will continue spending time bonding behind the scenes, and rejoin the outdoor exhibit once the weather warms up, according to the zoo.

Bonobo monkeys
Bonobo baby Kasai climbs in the Zoo in Leipzig, Germany, on November 27, 2013. The baby was born in January. (Photo by Hendrik Schmidt/AFP/Getty Images)
A bonobo looks through a window on April 23, 2013 at the Wilhelma zoo in Stuttgart, southern Germany. The bonobos of the zoo just have moved to a new indoor enclosure. In the wild, the great apes live in the Congo Basin in Africa. (Photo by FRANZISKA KRAUFMANN/AFP/Getty Images)
In This file picture taken on November 4, 2006 in the 'Lola ya bonobo' parc near Kinshasa young bonobo's play together. Scientists said on June 13, 2012 that they have cracked the genetic code of the bonobo and found the ape had some DNA encryption more in common with humans than even its closest relative, the chimpanzee. The bonobo is the last of the so-called great apes to have its genome sequenced, after those of chimpanzees, gorillas and orangutans. The data, which scientists hope will help shed more light on the lineage of humans, was obtained from Ulindi, a female bonobo at Leipzig zoo. AFP PHOTO/ ISSOUF SANOGO (Photo credit should read ISSOUF SANOGO/AFP/GettyImages)
Kanzi, 31, eats from the pan on November 11, 2011 in Des Moines, Iowa. It was a pivotal moment in history that separated man from other primates. Over a million years ago humankind began to conquer its fear of fire and use it as a tool. But now one special ape - a 31-year-old bonobo chimpanzee called Kanzi at the Great Ape Trust in Des Moines, Iowa - is showing us just how close we really are. Astonishingly the male chimp's favourite things to do is make campfires. With impressive dexterity 12 stone (170lb) Kanzi collects firewood and breaks it into appropriate sizes. He arranges the sticks in a pile, ignites them with matches or a lighter, and then watches the flames take hold. Then Kanzi erects a grill over his fire so he can cook burgers and marshmallows over it, using a frying pan. According to Dr Sue Savage-Rumbaugh, his main handler and the only scientist ever to conduct language research with bonobos, he does it all because it fascinates him. Watching Kanzi make fire is particularly interesting to scientists at the facility - a world-class research centre dedicated to studying the behaviour and intelligence of great apes - because they are investigating the big cultural events that led to differences between humans and other primates. Because we share 99.5% genes with bonobos - our closest relatives - Dr Savage-Rumbaugh argues our differences are mainly cultural. (PHOTOGRAPH BY Laurentiu Garofeanu/ Barcroft USA /Barcoft Media via Getty Images)
A Bonobo at Frankfurt Zoo in Frankfurt, Germany. A photographer has fought through debilitating pain to capture these intimate portraits of great apes. German photographer Volker Gutgessell has spent the last four years visiting Frankfurt Zoo capturing these incredibly sensitive images of bonobos, gorillas and orangutans. Standing patiently for several hours a day, the 58-year-old has documented the behaviours and expressions of his subjects - despite at every moment suffering chronic back pain caused by a severe slipped disc. Then in 2007 Volker developed tinnitus as a result of his injury, causing a constant ringing in his ears. But despite his condition, he has found a way of communicating through his pictures - and even picks up on the body language of his ape 'models' while shooting them. (Photo by Animal Press / Barcroft Media / Getty Images)
Three-months old baby bonobo Nakarla (L) plays with its mother Ukela on March 19, 2008 at the zoo in Frankfurt/M. The endangered species of bonobos is found in the wild only in tropical rain forests of the Democratic Republic of Congo. (Photo by Thomas Lohnes/AFP/Getty Images)
Germany Berlin - Berlin zoo: newborn Bonobo (Pan paniscus) Likembam with his mother Opala (Photo by ullstein bild via Getty Images)
Kinshasa, Democratic Republic of the Congo: This picture taken 04 November 2006 in the 'Lola ya bonobo' parc near Kinshasa shows bonobos. Bonobos live only in the Democratic republic of Congo (DRC). Bonobos were last great ape species to be discovered, and could be the first to go extinct. (Photo by Issouf Sanogo/AFP/Getty Images)
A Bonobo (Pan paniscus)21 May 2000 at the Bonobo sanctuary of Kinshasa. The bonobo, also known as the pygmy chimpanzee, is a rare species threatened with extinction by deforestation and human proximity, and only live in a smll area in the primary forest on the Congo river. (Photo credit should read DESIREY MINKOH/AFP/Getty Images)
Up Next

More from Inside Edition:
Elephants, Otters, and Other Sea Animals Enjoy Snow Day as Zoo Closes Due to Weather
Don't Be Shy! Rare Spotted Fawn Stays Close to Mom and Dad During Debut at Zoo
After Ringling Bros. Closure, Animal Activists Zeroing in on Zoos: 'Animals Deserve Better'