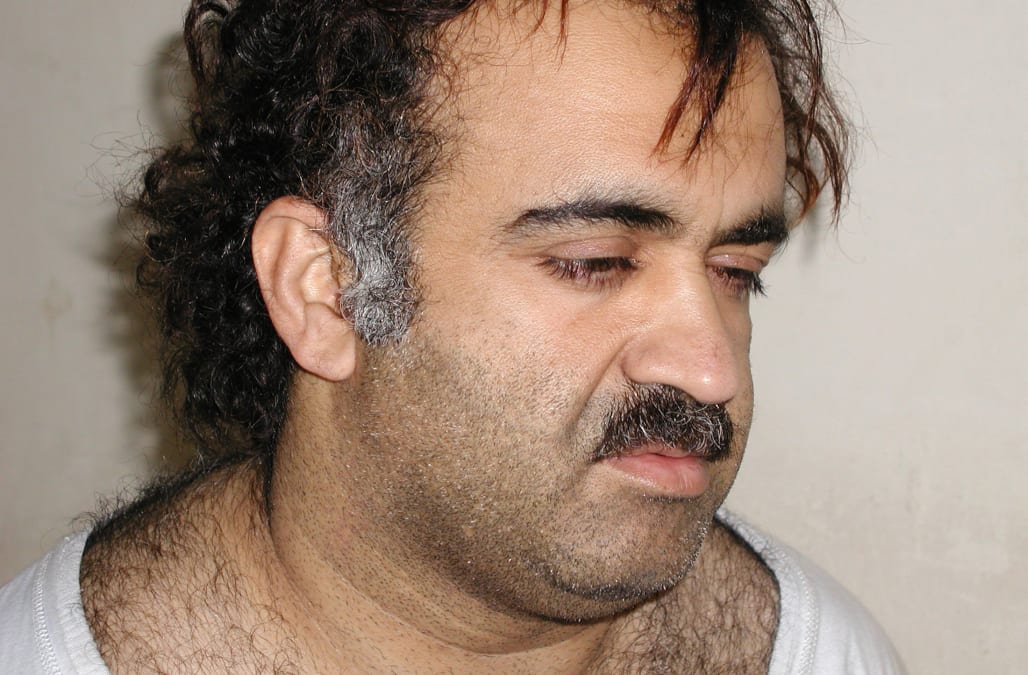 A letter from alleged 9/11 mastermind Khalid Sheikh Mohammed to President Barack Obama has been delivered to The White House, nearly three years after it was written.

Khalid Sheikh Mohammed wrote a letter to the president complaining of "Muslim oppression at the hands of the West" and the US role in Gaza back in 2014, according to the Miami-Herald's Carol Rosenberg, who was the first to report on its existence.

The alleged mass murderer has been held in a secret prison at Guantanamo Bay, Cuba since his capture in March 2003, and his communications with the outside world have been strictly managed. That meant prison officials declined to deliver the letter, since they viewed it as "propaganda," according to CBS News.

The security official said the documents, found at a house in the Pakistani city of Rawalpindi where authorities say Khalid Sheikh Mohammed, shown in the photograph during his arrest on March 1, 2003, provided an important insight into the al Qaeda network. Documents suggest Osama bin Laden is alive and that they were in recent contact, a senior Pakistani security official said Thursday.

United States investigators believe they have identified top al Qaeda leader, Khalid Sheikh Mohammed, one of FBI's most wanted terrorists pictured in these undated handout photos, as the mastermind behind the events of September 11. Mohammed is believed to still be in either Afghanistan or Pakistan.

A courtroom drawing by artist Janet Hamlin, reviewed by the U.S. military, shows Khalid Sheikh Mohammed (C) and co-defendant Walid bin Attash (L) attending a pretrial session in Guantanamo Bay December 8, 2008. The U.S. military resumed pretrial hearings at the Guantanamo naval base on Monday for five accused plotters of the September 11 attacks, even as the pending change in the U.S. administration made it unlikely their trials will be held at the base.

9/11 The National Commission on Terrorist Attacks meets to deconstruct the attacks on the World Trade Center and Pentagon on September 11, 2001. Pictured, commission member Bob Kerrey listens to a presentation delineating the plot that resulted in the attacks, complete with visual aids, this one a photograph of Khalid Sheikh Mohammed, a leading member of Al Quaeda. Commissioner Slade Gordon is visible at left.

U.S. President George W. Bush speaks in the East Room of the White House, Wednesday, September 6, 2006 in Washington D.C. Bush announced that high-value terrorist suspects held in secret prisons, including alleged Sept. 11 mastermind Khalid Sheikh Mohammed, have been turned over to the Defense Department for eventual trial before military tribunals. Bush for the first time acknowledged the U.S. was holding some suspected terrorists captured overseas at secret facilities run by the Central Intelligence Agency. The 14 such prisoners still in custody have been transferred to the military detention center at Guantanamo Bay, Cuba, he said.

A 9/11 victim family member, Maureen Santora, whose son Christopher was a New York City firefighter of Engine 54 who was killed in the World Trade Center, holds up photos of New York City firefighters killed in the 9/11 attacks during a press conference on the same day of a pre-trial session for Khalid Sheikh Mohammed and his four co-defendants on charges related to the 9/11 attacks at 'Camp Justice' on December 7, 2008 in Guantanamo Bay, Cuba. Khalid Sheikh Mohammed, the alleged mastermind of the September 11, 2001 attacks, was set to appear before a U.S. military tribunal where he was to face the victims' kin for the first time.

Khalid Sheikh Mohammed holds up a piece of paper in this artist's sketch during a court recess at pre-trail hearing at the U.S. Naval Base Guantanamo Bay, Cuba, October 15, 2012. The orderly session kicked off a week of hearings that will focus later on secrecy issues in the death penalty case against the alleged mastermind of the hijacked plane attacks that killed 2,976 people in the United States in 2001, and four alleged al Qaeda conspirators accused of providing money and other support for the hijackers.

An American flag hangs from a building next to Ground Zero on November 14, 2009 in New York City. A decision by the United States attorney General Eric Holder to bring Khalid Sheikh Mohammed, the alleged mastermind of 9/11, to New York City to face trial in a civilian court rather than a military commission has divided New Yorkers. Four other accused terrorists from Guantanamo Bay are to be brought with Mohammed to a high-security federal prison in Manhattan. Many people have voiced security concerns and the possibility that the accused could be set free if a civilian court fails to convict.

US Attorney General Eric Holder holds a press conference to announce that five men accused of the September 11 attacks will be tried in a New York civilian court at the Justice Department in Washington,DC on November 13, 2009. Attorney General Holder, in announcing the decision, said the government would seek the death penalty against Khalid Sheikh Mohammed and the four others, all currently detained at Guantanamo Bay. Holder gave no date for the start of their trial in a court of the Southern District of New York, located in lower Manhattan near 'ground zero' where the worst of the 9/11 attacks occurred.

The Army judge overseeing Mohammed's case overruled that view, and ordered prosecutors on January 6 to deliver the letter to the president, Rosenberg reported on Monday. CBS reported that the White House received the letter on Tuesday, but they declined to discuss its contents.

The judge's ruling — still under seal on the military commissions website — said there was "no legal basis" for the secrecy surrounding the letter, and gave prison officials 30 days to scrub it for any security concerns before releasing it to the public, The Miami-Herald reported.

If that timeline holds, the letter will appear on the military commissions website sometime around February 5, 2017.

Mohammed is currently on trial for his role with the al Qaeda terror group and his alleged planning of the 9/11 attacks, which he admitted to being responsible for "from A to Z."

SEE ALSO: The US Air Force spent $387,000 to make the lobby outside a 3-star general's office look nice