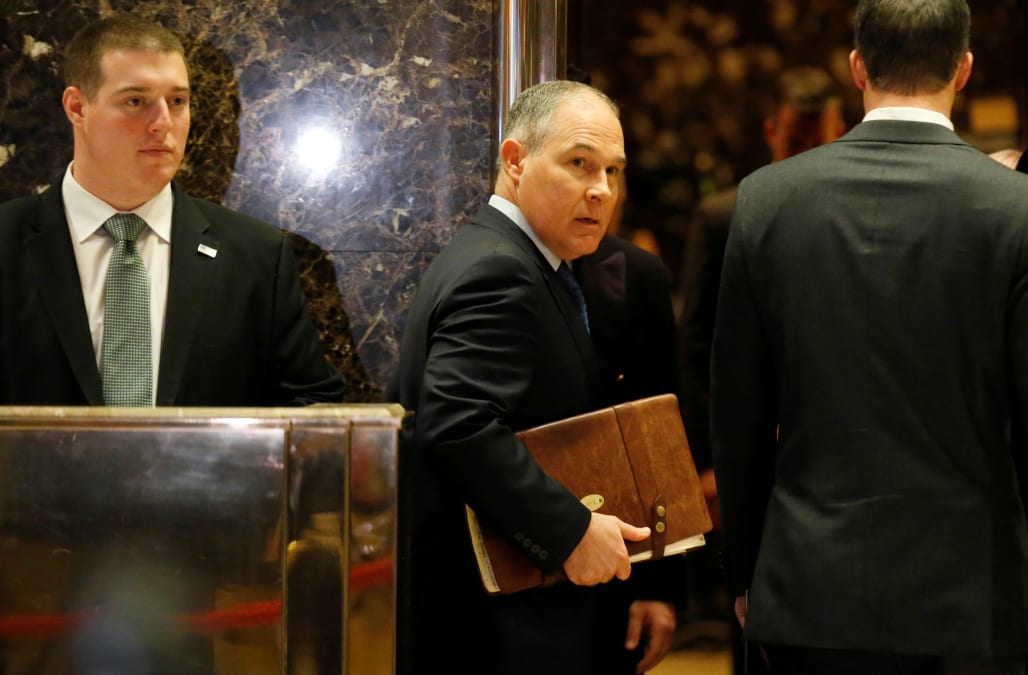 NEW YORK, Jan 17 (Reuters) - More than 60 percent of Americans would like to see the U.S. Environmental Protection Agency's powers preserved or strengthened under incoming President Donald Trump, and the drilling of oil on public lands to hold steady or drop, according to a Reuters/Ipsos opinion poll released on Tuesday.

The results could foretell stronger-than-expected public opposition to Trump's plans to boost energy development by slashing environmental regulations, an agenda shared by some of his top Cabinet picks slated for Senate confirmation hearings later this week. Trump takes office on Friday.

Among Republicans, 47 percent wish for the EPA either to "remain the same" or be "strengthened or expanded," while 35 percent want it "weakened or eliminated."

The online poll of 9,935 people was conducted Dec. 16 to Jan. 12 and has a credibility interval, a measure of accuracy, of 1.1 percentage points.

"Trump is a businessman, and that's all he thinks about ... what will make money," said Terry Cox, a 61-year-old resident of Tennessee who voted for the New York real estate mogul in November's election. "But I'm hopeful there's a limit to what he can do when it comes to weakening protections for wildlife and the environment."

Trump campaigned on a promise to drastically reduce environmental regulations in order to create jobs and pave the way for more oil, gas, and coal development. He has said he would refocus the EPA on its core mission to protect air and water quality.

He also accused the agency of using "totalitarian tactics" to enforce its regulations under President Barack Obama, who had made the EPA central to his broader effort to combat global climate change by cutting carbon emissions.

RELATED: Which statement comes closer to your point of view? The EPA should be...

According to the Reuters/Ipsos poll, just over 60 percent of Americans think it would be wrong to weaken wildlife protections and air and water regulations to bolster the energy industry, while they were nearly evenly split on whether carbon emissions should be softened to help the industry.

The poll also showed that 39 percent of Americans want to see a decrease in coal mining and oil drilling on U.S. federal lands in the coming years, while 23 percent hope for it to stay the same. Just 22 percent said they wanted to see an increase, and the rest said they do not know.

The U.S. government holds title to about 500 million acres of land across the country, including national parks and forests, wildlife refuges and tribal territories, overlaying billions of barrels of oil and vast quantities of natural gas, coal, and uranium. Trump has promised to boost industry access to these reserves.

SEE ALSO: Close friends open up about why Ivanka Trump be a strong first daughter

Trump nominated Oklahoma Attorney General Scott Pruitt, a climate change skeptic who has repeatedly sued the EPA over its regulations, to head the agency. Pruitt is scheduled for Senate hearings on Wednesday, where lawmakers are expected to ask him about his ties to the energy industry.

And Trump chose former Texas Governor Rick Perry to head the Department of Energy, a move that would put him in charge of the agency he proposed eliminating during his failed bid for the 2012 Republican presidential nomination. Perry will be questioned on Thursday. (Writing by Richard Valdmanis; Editing by Matthew Lewis)

More from AOL.com:
The 'Exxon Knew' controversy is plaguing Rex Tillerson — here's what it means
Mexico again says there is 'no way' it will pay for Trump wall
Trump says pharma industry 'getting away with murder,' stocks slide