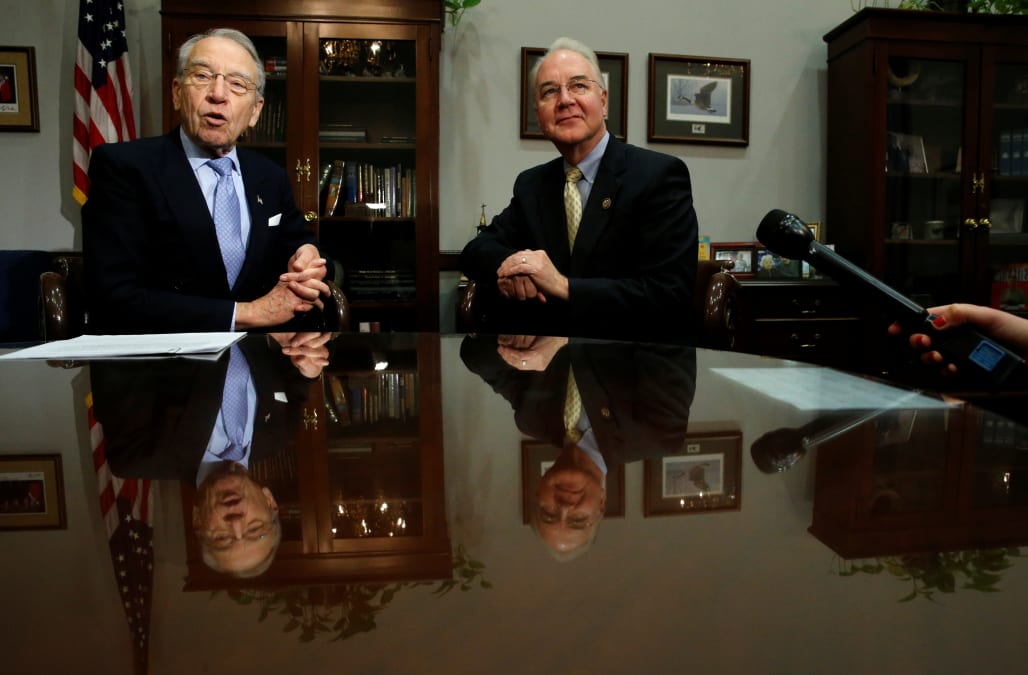 In the latest sign of mounting problems for President-elect Donald Trump's choice to lead the Department of Health and Human Services, CNN reported Sunday that Rep. Tom Price (R-GA) purchased stock in a medical device manufacturer last year just days before introducing a bill aimed at protecting the company from an adverse government regulation.

Last March, Price bought shares worth $1,000 to $15,000 in Zimmer-Biomet, a leading manufacturer of knee and hip replacements. Barely a week later, the senior Republican lawmaker introduced legislation designed to delay until 2018 a new Centers for Medicare and Medicaid Services (CMS) reimbursement formula that analysts warned would be financially harmful to the company when fully implemented, according to the report.

Related: Trump's Health Secretary Invested in a Company Linked to the Opioid Epidemic

For more than a year, Price, a wealthy orthopedic surgeon who was picked by Trump to help lead the effort to repeal and replace the Affordable Care Act, had complained that CMS's proposed reduced Medicare payments for hip and knee replacementsthreatened hospitals and medical providers. Zimmer-Biomet and another large manufacturer of hip and knee replacement devices stood to lose the most from the new rule.

Three months after Price introduced his bill, dubbed the Health Inpatient Procedures Act of 2016 or HIP Act, Zimmer-Biomet's political action committee contributed $1,000 to Price's campaign committee, according to the report.

The Trump transition team immediately dismissed the CNN story as "junk reporting" and part of an effort by Senate Democrats and the liberal media to derail Price's nomination. Price's defenders noted that Price's small purchase of Zimmer-Biomet stock was broker directed and that Price didn't become aware of it until after he had introduced the bill.

"Any effort to connect the introduction of bipartisan legislation by Dr. Price to any campaign contribution is demonstrably false," said Phil Blando, the Trump transition spokesman.

While his aides insist that the Georgia lawmaker has scrupulously adhered to congressional ethical guidelines, Price nonetheless has come under intense scrutiny by Senate Democrats and public watchdogs for possibly engaging in insider trading for years, a violation of federal ethics law.

A recent analysis by The Wall Street Journal found that Price bought and sold stock worth more than $300,000 in 40 health care, pharmaceutical, and biomedical companies since 2012. The conservative Republican is a member of the Ways and Means subcommittee on health, which oversees Medicare and other government health programs, and until recently he also chaired the Budget Committee.

Price invested last year in a major prescription drug distribution company that over the years has been linked to the nationwide epidemic of opioid abuse and deadly overdoses. McKesson Corp., the largest drug distributor in the U.S., has been the target of two publicly disclosed U.S. Drug Enforcement Administration actions, according to The Washington Post. The company subsequently paid $163 million in fines in response to allegations that it "failed to report hundreds of suspicious orders for millions of pain pills" from Internet pharmacies and others, according to the newspaper.

Late last week, Price listed McKesson Corp as one of the 43 stocks he intends to sell as part of a major divestiture of his financial holdings and business interests. That move was made in anticipation of Senate hearings into his nomination to become secretary of health and human services. Those hearings before the Finance Committee likely will extend through mid-February because of the complexity of his case.

Price appears to be one of Trump's more vulnerable cabinet nominees. Senate Democrats are likely to ask him about his stock portfolio and evidence that he sometimes coordinated stock transactions with his legislative action or may have used insider information gleaned from his congressional duties to inform his investments.

Larry Noble, general counsel at the Campaign Legal Center, a watchdog group, told CNN, said that Price's action "clearly has the appearance of using your influence as a congressman to your financial benefit."